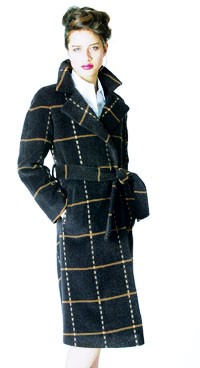 NEW YORK — Three well-established brands are jumping into the already crowded designer-driven coat business just in time for what many expect to be a busy fall season.

Designer William Calvert has put the finishing touches on Perry Ellis and Perry Ellis Portfolio outerwear, which is licensed to the Utex Corp., based in Montreal; Ellen Tracy has tapped the Winlit Group here for its wool coats, and Pirelli, the Italian company widely known for its tires, is making inroads in the U.S. with its P. Zone label.

Encouraged by the prevalence of coats on American and European runways and consumers’ willingness to wear more stylish items, outerwear makers are confident there will be a lot from which to choose. All three brands hope to attract new customers, especially fashion-conscious ones who might not typically shop in a coat department.

Calvert, who is working as a design consultant for Utex, explained, “Often the coat floor is really missy. But there are a lot of women between the ages of 25 and 45 who want something cool, but they don’t want to spend $1,000,” he said.

Calvert has designed custom-made clothing since 1997 under his own name and continues to do so. He said he was drawn to the challenge of creating quality, well-constructed coats in cashmere, wool, nylon and other fibers with affordable price points. In addition to his own high-end collection, he has consulted for J. Mendel. “I’m accustomed to dealing with super-duper expensive mills. I had to find mills and fabric for one-quarter of the price.”

Hints of the late Ellis’ design sensibilities, which also can be seen in Patrick Robinson’s sportswear, are evident in Calvert’s outerwear, such as bias cuts and big buttons. “We’re relaunching the women’s business by building on quality with great, talented designers. It’s nice to be able to have a single vision that everyone understands, and to let them do their thing,” Kaye said.

Perry Ellis is currently refining its suit collection, which is licensed to DHG Inc., a New York-based firm. There are plans to introduce accessories — handbags and footwear — through a licensor or in-house within the next year, Kaye said.

Pirelli, a 130-year-old Milan-based company, is going after women’s outerwear in the U.S. Tire tracks provided the inspiration for the 18 coats, designed to curve the body.

An iridescent down bomber jacket, a hooded rubberized cotton cape, a lightweight wool coat with a rubberized layer and a belted nylon jacket with mesh lining are among the styles. The cape has a defined peak, a feature Pirelli used when it made helmets for the Vatican’s firemen from 1950 to 1972. Wholesale prices range from $300 to $600.

The company also is making the most of its relationship with Naomi Campbell, who has appeared in its popular calendar for years. “Naomi is very close to us. First of all, she likes our product, then because of our calendar. She is a good friend,” said Carlo Corti, director of communications.

Such a good friend that she appears in Pirelli’s overseas advertising. Campbell agreed to allow the brand to use a few of those images for its fall look book, including one of her wearing a P. Zero by Pirelli pink nylon stitched jacket. In addition to outerwear, Pirelli makes T-shirts, pants, shoes and watches. Currently, the women’s collection is offered on a limited basis at Saks Fifth Avenue and Bergdorf Goodman, but the men’s business is more established than the women’s.

Pirelli focused on building its women’s sales in Italy and then in other parts of Europe before turning its attention to the U.S., Corti said. “The U.S. is such an important market. We knew we must do it and the brand is well-known in the U.S.” he said.

“The expansion of licensing is one of our key initiatives at Ellen Tracy, so I am very happy to announce our broader association with Winlit,” said Ellen Tracy president Glenn McMahon.

David Winn, president of Winlit, described Ellen Tracy as the company’s “jewel in the crown.” Winlit recently opened a new showroom at 463 Seventh Avenue to house the 46-piece collection. Distribution is aimed at better specialty stores, and wholesale prices will range from $275 to $625.