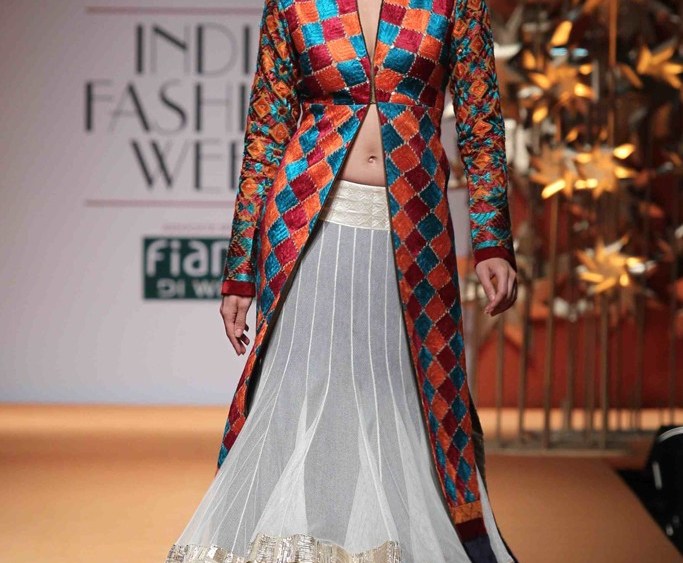 NEW DELHI — As the number of fashion weeks across India continues to grow — more than 20 at the last count — Wills Lifestyle India Fashion Week sponsored by the Fashion Design Council of India, or FDCI, here remains the main event both designers and buyers take seriously.

The five days of shows ended Sunday with 58 designers showing and 57 booths in the exhibition hall. There was certainly a step up in elegance and more of a focus on cleaner cuts and an emphasis on styling rather than embellishments. This was evident in the works of both established and newer designers, including such names as Rahul Mishra, Payal Pratap, Ranna Gill and Shivan & Narresh.

There was considerable hype that designer Tarun Tahiliani was again showing at the event. Over the last two years, many of the country’s best-known designers have kept away from India Fashion Week, or showed off site. This time, instead of one of the coveted late night spots, Tahiliani did a 5:45 p.m. show, drawing a large audience.

His collection of flaming yellows and burnished reds was held together by what he is known best for — his sensuous drapes — but this time with more layering and a play of materials. The colors of the collection were enriched by the layers as well as the materials he chose, including silk, velvet and crepe wool, which he combined with traditional motifs and prints such as paisleys. Inspired by the “careless sensuality of the sadhus and the dervishes,”  Tahiliani told WWD that his inspiration came from a journey he undertook recently. “I went to Kumbh Mela and this excited me,” he said.

The Kumbh Mela is a pilgrimage that takes place once every 12 years, in the city of Allahabad.

The Woolmark Co. sponsored a show by Rajesh Pratap Singh to mark its new association with the designer. Amir Sheikh, India country manager for Woolmark, said experimentation with wool was being taken to more creative heights. “We hope to take wool awareness to its next level,” he said. Singh’s show had a strong dramatic element with leaves lining the ramp denoting fall and fake snow being generated. He used circular knit wools, tweeds and patterned wool combined with zips and circular pockets.

The collection is slated to retail in the designer’s own stores as well as in international multibrand stores.

New to the fashion week as well was Masaba Gupta, who recently was appointed creative director for Satya Paul. Known for her quirky style, Gupta continues to work with her own label but was brought into Satya Paul to update the collection; this was her first show for the label. “The brand is reaching for a new and younger audience,” a brand representative explained “and the new Western lines and the saris are indicative of this. The brand has a lot of new energy and is making a statement of change.” Although Satya Paul’s trademark saris were still part of the collection, dresses in neon colors with abstract designs gave the label an energetic, vibrant look.

Joy Mitra’s collection focused on Bollywood with photos of legendary actors splashed across pockets, dresses and other forms of detailing. While this wasn’t the first time Bollywood icons have been used like this, Mitra said that it was an inspired collection to mark 100 years of Indian cinema in 2013. “Movies are a great leveler in our society. They take away the edge from caste, class and every other form of separation. So why not of fashion?” he said.

Elsewhere, there were elements of the fantastic and futuristic — from designers Alpana and Neeraj, for instance. The duo, who have designed for Lady Gaga, showed off fish-tail styles of fitted dresses with detailing in fake leather and stones. “Performers and people in show business all over the world have been watching our styles and picking up our designs,” said Alpana Chauhan, who said that most of the garments were corseted. “We like to play with textures and make it glamorous, with honeycomb and chain patterns.”

The grand finale was a form of homecoming for designer Manish Arora, who showed at the event after an absence of more than four years. During that time, he was in Paris as creative director at Paco Rabanne and more recently showed his own collection during Paris Fashion Week.

His show at WLFW held a combination of anticipation and a touch of disappointment — it was the same collection that he showed at Paris Fashion Week in February. Deepak Bhagwani, managing director of the brand, said that it was only a few weeks after the showing in Paris and that the styles from the Paris collection are not being marketed or sold in India.

While many designers commented that the number of buyers appeared to be diminishing each year, partly as a result of the global economic situation — others said buyers were a function of the collections of different designers and their offerings. Nachiket Barve, who had a booth near the entrance of the exhibition space, said there had been no shortage of buyers and sales at the event were strong. Designers agreed the number of buyers from the Middle East were on the increase, as were the number from the fast-growing domestic market.