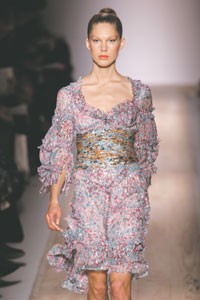 Emanuel Ungaro: “Ungaro is charming and funny, not pretty or sweet,” Vincent Darré explained before his second show for the house, the word “froufrou” tripping repeatedly off his tongue. And therein lies the dilemma: Funny meets froufrou. While Darré made marked improvements over last season’s debacle, he overdosed his spring collection with relentless stiff frills that stopped just short of unfortunate hilarity. This meant an overall explosion of ruffles banded around the borders of tight cocktail dresses, gathered into a puff of a bolero or overdecorating the seams of a dress.

What looked good was a trio of dresses that must have slipped through the cracks, because they were, however unintentionally, pretty. Cut in delicate watery prints and done with more demure ruffling, they demonstrated a lightness and ease that the rest of the collection lacked.

Ungaro is not a company that is laughing its way to the bank these days. And Darré needs to convince his audience that he can bring a sense of currency back to the brand before it’s too late.

Costume National: It was a tall order that Ennio Capasa set out to fill this season, with a promise in his show notes of “sensual and essential women” that were both “conceptual and erotic.” So he put the focus on a constructed bust and body-hugging silhouettes, and sent out nearly every look cinched at the waist with a wide belt. But the best looks were those that balanced that hard edge with just a bit of softness. A pearly silk jacket belted over a sheer dress with a bustier top let loose with a flowing skirt. A pair of jersey gowns did the same, and would have been perfectly lovely sans the jeweled embellishment.

Tao Comme des Garçons: Wedged into a nonspot on the fashion calendar, the Tao Comme des Garçons show was called for noon on Wednesday and started at 12:02 p.m., after one dedicated assistant undusted every inch of a black velvet runway with a lint brush. The poor thing. But Tao Kurihara’s impressively exacting attitude goes beyond her clean-carpet quirks.

As with her debut last season, Kurihara took a microcosmic approach that was both short and sweet by focusing her collection on a single concept — a concentration on frilly knit corsets and cuddly bloomers. For spring, Kurihara pieced together elegantly artsy trenchcoats, skirts and jackets from a slew of embroidered kerchiefs, lacy napkins and crocheted doilies. The look was as fresh-scrubbed as a Quaker bride and glowing with grandmotherly goodness. Black lace medallions were grafted to the edge of a trench jacket in stacked ruffles, while other pieces, most in white, were embroidered with quaint flowers. While it was all meticulously honed and poetically detailed, Kurihara’s clothes are also pretty enough to appeal to the nonfashion victim. The Tao collection may be modest in scale, but it’s majorly gorgeous.

Andrew Gn: It’s easy to see why ladies of a certain tax bracket love Andrew Gn. They’re not afraid of a little embellishment, and the designer is certainly not afraid to oblige, usually quite expertly. For spring, Gn worked it in two ways: first in black and white and then in a bold burst of color, albeit with a brief intermission of wooden beading. But even the potentially stark pairing of ebony and ivory was lush in Gn’s hands with chunks of jet and milky white glass beads on suits, sweet point d’esprit ruffles on peasant tops and graphic appliqués of pineapples, flowers and lace on everything.

But a deep love of color is practically encoded in Gn’s DNA. He indulged it with swirling bohemian prints cut into tiered dresses with beaded straps and bodices, and bold combinations of turquoise beads on solid kelly and acid green chiffons. Gn’s new shoe collection also made its runway debut, usually coordinating with the look in a matching print or encrusted with identical beads. The matchy-matchy look might not be for everyone; then again, neither are Gn’s clothes. But this designer and his showy clientele are a matchy-matchy made in heaven.

Veronique Branquinho: A quaint, yes, quaint parking garage in the Bastille was the arena for Veronique Branquinho’s spring show, where the designer showed no signs of slowing her engines. Branquinho is bursting with ideas almost to a fault. Not citing one specific influence, but rather her woman’s intuition, the designer did say she felt her “girls were like a modern-day Artemis, the goddess of the wilderness and the hunt. They symbolize independence, strength and elegance.”

For the modern-day huntress who’s not into flou, there were plenty of off-center pleated skirts paired with intarsia knits, capes fashioned to resemble mackintoshes, lots of shoulder-baring tops with flyaway sleeves and bouclé tweed jackets complementing tailored bottoms — all chock-full of commercial appeal. Completing her look were opera-length black leather gloves.

There were several ideas, however, that could have been left on the sample-room floor — Eighties unitards, jumpsuits and stirrup pants aren’t quite poised for a comeback.