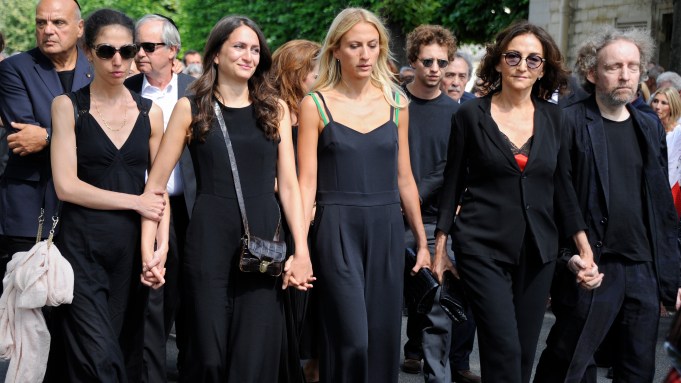 PARIS — Sonia Rykiel was remembered at her funeral Thursday as a singular fashion personality whose free spirit and joie de vivre defined a particular brand of Parisian style.

A sea of black-clad friends and family from the fashion world and beyond gathered at the Cimetière du Montparnasse. The famous cemetery is also the resting place of the likes of Charles Baudelaire, Simone de Beauvoir, Jean-Paul Sartre, Samuel Beckett and Susan Sontag.

Filled with poetic speeches and musical passages, including a heart-soaring performance by violinist Renaud Capuçon, the ceremony reflected the unique fashion legacy and culture-soaked life of the flame-haired French designer, who died here on Aug. 25 at age 86 following a 20-year battle with Parkinson’s disease.

Longtime collaborator and photographer Dominique Issermann arrived with former Rykiel model Anne Rohart. “I started working with her in 1979. We did all the advertising visuals until 1990, shot 25 collections. Sonia Rykiel picked us when we were nothing. We were two beginners. Anne had never done photos and I had never shot for fashion. I shot black clothes on black with just a small white trim and that really what gave me a leg up,” said Issermann, adding, “She was running a big company and she was doing it with the ease of a cat.”

“She was such a strong personality of the fashion world, an exceptional woman with such vision. Our paths never crossed professionally, but they did on a personal level and I have such wonderful memories,” Toledano said.

Nathalie Rykiel led mourners up the cemetery’s central alley to a statue of the Angel of Eternal Sleep where guests stood around a lectern under the blazing sun, a light breeze rustling through the leaves of the surrounding trees.

Bringing a smile to guests’ faces, the ceremony opened with a fun musical mix by Rykiel’s composer son, Jean-Philippe, that sampled famous Rykiel phrases like, “I started by making a sweater; I ended up the queen of knitwear, without even knowing how to knit,” and “I love children, especially my own.”

Sharing some personal memories, former French prime minister Lionel Jospin, who is typically fiercely private, confessed he was clueless about fashion before meeting Rykiel, sheepishly recalling a Vogue feature in the late Seventies on politician’s style that described his look as “disastrous.”

“Entering Sonia Rykiel’s world initiated me in the art of clothes,” he said. “It also showed me what it takes to create a house, a style, a name that resonates both in France and the world over; the level of talent it involves, the ability to connect with women and capture l’air du temps, the sense of color and form, the ability to seduce.”

Journalist and documentary-maker Loïc Prigent, who has made several films about Rykiel, also shared his memories of the designer.

“Sonia Rykiel designed for those who, like her, want to have their cake and eat it, too….She was a true redhead and made sure the house archives were filled with Polaroids to prove it. She wrote — both on books and sweaters; she added mouths to her dresses because she liked to eat, kiss and tell fibs,” he said, describing the family atmosphere of the Sonia Rykiel flagship on the Boulevard Saint-Germain. “She would treat her collaborators like her own children. She adored them, but she would always be the one who added the last bow, the last rhinestone, to a look so that it was just right.”

Rykiel’s three granddaughters also each gave speeches. “I am no longer 10, but until Thursday, I thought we would find a solution and that you would get over the illness: a serum, some medicine, a lover or a magical knit,” said Lola Rykiel, brand director of public relations for North America, who also shared insight into Rykiel’s approach.

“You would ask me how girls dress in New York. You always said that to find inspiration you liked to observe girls in the streets, the ones who don’t care about being trendy. You looked at their walk, their legs, whether they had a book in their hand or seemed to be in love. You weren’t interested in perfection. You preferred that they had a certain something, a mix of sense of humor, insolence and grace.”

“Their words made me fly, they really made us get a deeper sense of the designer but also the person,” said an emotional Elbaz following the ceremony. “And it made me love her even more.”