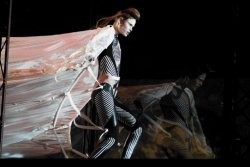 Alexander McQueen: Masterful. Alexander McQueen is a couturier at heart, an intriguing storyteller and superior craftsman. In the collection he showed on Saturday night, the three faces of Lee were on magnificent display. After spring’s spectacular shipwreck motif, for fall, McQueen’s inner novelist took his audience on a trek through the snowy emptiness of the tundra at a time of impending peril.

As for whether peril pends for him or any of the designers within Gucci Group, McQueen remains calm. Before his show, he said that, after reading reports of Domenico de Dole’s and Tom Ford’s possible exit from the group, “I rang Domenico and he said he wasn’t leaving. The reason I’m here is Tom and Domenico.” Still, he praised PPR as “a good company,” adding, “You just have to wait and see. But the type of person I am, if I’m not happy, I leave. I’ve done it before.”

But if McQueen has felt at all distracted, one could not discern it from his runway. Because if, baby, it’s cold outside, at least his heroines will face the elements and an uncertain future gloriously turned out. For all his former bad-boy image, the increasingly svelte McQueen took his bow after his show in pristine, even jaunty whites, and holding the hand of Sarah Heard, his chief assistant.

McQueen champions glamour all the way. Big, bold, sophisticated glamour. And if it can veer toward the costumey, well, he thinks that when you invite an audience, you put on a show. Back in his studio, he and his staff call those elaborate pieces “the showpieces” — as if no sane person would assume otherwise of a burlap frock that took five weeks to embroider or a skirt that was intricately hand-painted. But the remarkable thing is that such pieces, even the most elaborate chinoiserie fantasy, do not overtake the real clothes, even when a raw-edged leather coat from pre-fall finds its way to the tundra.

Within this context, he showed gorgeous clothes — beautiful suits; flippy minis; Aran knit legwarmers zipped up the back. But McQueen really focused on dresses with a lineup of structured, full-skirted gems — each one uniquely embellished — often with skirt panels flapping over pleated petticoats. Then he turned soft for a moment, closing the show with the most gorgeous of goddess dresses, in white silk sprinkled with silvery beads on, you guessed it, Natalia. And the future looked anything but bleak.

Helmut Lang: So you thought Helmut Lang was unflappable? Wrong! The collection he showed on Friday flapped all over the place, and it was sensational.

These days, Lang can do no wrong. After a quiet time during which he seemed to retreat from fashion’s forefront, he’s back big-time, following up last season’s beautiful collection with another star turn, a distinctive parade that infused practicality with chic as only he can. But then, different drummer is Lang’s middle name. Exhibit A: his program notes, on which his name appears in big, bold letters. But so do those of a host of others somehow involved in staging the show — Melanie Ward, Frederic Sanchez, Louise Bourgeois, Dick Page, Didier Malige. Unlike so many designers, Lang sees no problem with flaunting his team in this most collaborative of industries.

Of course, he sets the tone — cerebral sans arrogance. These clothes are well-thought-out and well-controlled, but beyond detailed. So much so that they could have turned tricky in a flash; in fact, let’s face it, Lang did let out a trick or two. But as Siegfried said to Roy, nice trick! Those flaps, for example: Lang seamed his coats horizontally and then undid the seams in front, so that de-Velcroed, the loose panels went fabulously flap-happy. Similarly, he strapped, tied, harnessed and slung his way through the collection, lacing pants up the sides, fastening layered hose with garters, pulling multiple tanks this way or that, and sometimes finishing a look with knitted gauntlets. And while he worked almost exclusively in black, navy and gray, for evening he lightened up with little dresses in airy compilations of pale, ethereal silks.

More often, however, pragmatism reigned. Lang is perhaps fashion’s most devoted champion of performance luxury, and as such, he obsesses over fabrics; in the program notes, he gave cashmere fleece a bigger credit than he gave himself. That deference to comfort skewed the mood to the cozy side of aggression. And in a mini-reprise of his men’s show, he sent out a shirt emblazoned with thoughts straight from the old Baltimore Catechism: “Faith Hope Charity.” Not to mention total chic. Talk about a religious conversion.

Viktor & Rolf: “Will work for clothes” — apparently, it’s not just for models anymore. Tilda Swinton has been something of a muse for Viktor Horsting and Rolf Snoeren for a while, but the spectacular Viktor & Rolf collection the boys showed on Saturday was a veritable Tilda-fest. Not only did the lofty actress inspire the designers, she also wrote and recited an equally lofty lyric for the soundtrack—“separate the signal from the noise” — and opened and closed the show.

Signal here: Bye-bye fashion bacchanalia; welcome tailored control. And it looked great. In past collections, the designers have focused on tailoring, and proven themselves consummate pros. Here, they flaunted that skill relentlessly, while making some kind of commentary on conformity — perhaps that it’s not all bad? — by turning each and every model, from Stella Tennant to Natalia Vodianova — into a Tilda aspirant, face pale and red hair pulled back tightly.

But it worked, the girls’ exaggerated sameness putting a stronger focus on the clothes. It started with the black-suited, white-shirted Tilda, and moved on through a smart update of many of the boys’ favorite themes — chic suits, shirtdresses, jeans, shirts and jackets with huge haute collars, the never-waning fascination with volume and proportion. Sometimes they puffed up a single item — a little parka blew up into a balloon in back — and at other times, they layered. This started discreetly enough, but worked up to a pile-it-on-a-thon of eight shirts and a jacket, and of nine nesting jackets that recalled their one-girl-only couture show several years ago.

For the finale, Tilda returned, followed by the entire cast of models in a vignette that looked something like a Robert Palmer flashback. But with clothes this good, what’s wrong with a renaissance?