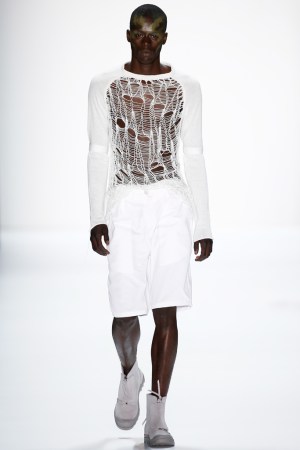 The Sopopular runway show opened with “Breaking Bad” actor Roy Frank “RJ” Mitte 3rd, whose break into modeling has not been bad at all. Neither was the collection by Berlin men’s wear designer Daniel Blechman, who took partial leave from his traditionally dark “military-meets-urban-hip-hop” style. The collection included olive-green and white for the first time to create a more ruffled aesthetic that included pale feathers covering long white tunics and shorts and threads dangling from loose, distressed knitwear.

Other looks were more true to Blechman’s slick, urban warrior form: Black boxy leather T-shirts, plain button-downs and asymmetric jackets were out in force. Shiny plastic outerwear reappeared this season in transparent sweaters that added an extra sheen to some of the layered looks. The designer said he looked East for inspiration: “I was influenced a lot by clean, asymmetric Japanese style when designing this collection,” he noted, “and I got the idea for the feathers from a painting I saw that was made using bits of string.”