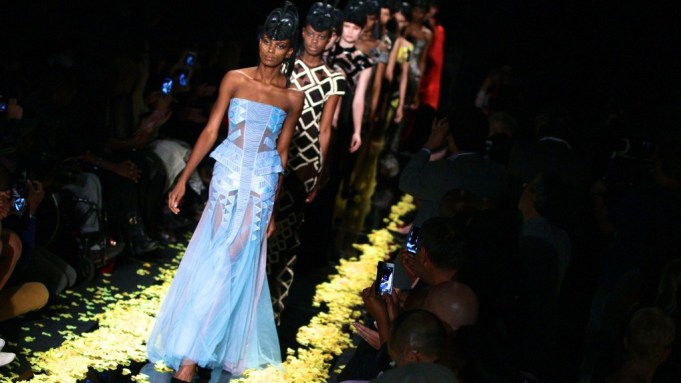 During the same event, Scott Schuman, of The Sartorialist, famously ruffled feathers when he said that he’d only met a few people in the country that he’d wanted to take pictures of, calling the South African style he’d seen thus far lacking “a certain amount of charm.”

Then just last month, during MBFW Joburg, another international observer, Ciano Clerjuste, founder and president of United Colors of Fashion, lambasted the event, organized by African Fashion International, for, among other things, not being on a par with international standards, presenting mediocre designers, failing to attract international visitors and media and having an industry, in general, that was fractured and marred by unnecessary rivalry. He was referring to the two organizers of rival fashion weeks: AFI, who has partnered with Mercedes-Benz, and the fashion week veteran South African Fashion Week, which holds SAFW twice yearly.

He didn’t mention the third contender, Arise Africa Lagos fashion week, which hoped to position itself as the fashion week for the African continent. However, the event was canceled at the end of March for various technical and logistical reasons — some designers and visitors encountered visa, shipping and vaccination difficulties, apparently — but the annual Arise Africa Designer Showcase would proceed as planned in New York in September.

“I wonder if the organizers think of doing the events to benefit the designers or themselves?” Clerjuste asked, urging them to put aside ego for the sake of a united front. “International buyers, media and visitors won’t come to South Africa twice per season for fashion week.”

In terms of understanding the purpose of fashion week, SAFW has always been consistent in emphasizing that fashion is a business that requires more than design talent to succeed. Its founder and director, Lucilla Booyzen, has, for the last 17 years, focused on getting local designers to constantly “up their game” while encouraging retail partnerships with national department store chains as well as smaller, multibrand boutiques.

Booyzen would like international buyers to flock to South Africa, of course, but admits that many designers are still not at that level, not so much because of lack of talent, but for lack of production, delivery and quality. “It’s an educational process that never ends,” she said. “The ones who get that are the ones who do well, even when they go abroad.”

One such designer is New York-based milliner Albertus Swanepoel, who presented his homecoming ready-to-wear capsule collection designed for the South African market at SAFW. The show was an ode to simplicity, featuring mostly separates in easy, elegant shapes and a soft, neutral palette. There were touches such as grosgrain sashes harking back to Swanepoel’s millinery background.

He started out in Johannesburg as a couture designer. “Well, I thought I did couture,” he said with self-deprecating humor, “before I saw what real couture was in Europe and everywhere else, but yes, I had the audacity then to call myself a couturier.”

Despite the strong sophisticated sportswear ethos that was very New York, Swanepoel said “it was a totally African story. This is a big mission. The idea is to create a sustainable industry, to create jobs. Everything will be manufactured here, using all South African fabrics. That’s the main goal.”

Booyzen said she expected local buyers to snap up the collection during the SAFW Buyers’ Lounge presentation. Retail prices would be in tune with local luxury prices, about $200 for a dress.

The other big homecoming story of the week was the showroom presentation of designer Rahim Rawjee, whose made-to-measure-but-not-fully-bespoke men’s wear luxury label Row-G has been quietly attracting a clientele ready to fork out a minimum of $1,200 for a suit that reportedly goes through 120 different quality-control checks before completion.

The Toronto-educated Rawjee began his career as a promising women’s wear designer whose first show was with SAFW in 1999. Three years later, Rawjee abandoned women’s wear to learn all he could about tailoring and men’s wear, before finally feeling confident enough to open Row-G at the end of 2012.

His show had all the hallmarks of a couture presentation, complete with Pol Roger Champagne and a run-of-show card that described in detail the 12 looks shown, which included suits, overcoats, shirts, pocket squares and ties, all made in Rawjee’s atelier on the premises. “All the garments you see are ready-to-wear,” he said, “in the sense that they will all hang in the showroom. But when a customer walks in and says, ‘I have to have that teal suit,’ it will be made to measure for him. Or if he’d like the same suit in a different color or material, or a slightly different cut of pant, we can do that for him, too.”

Rawjee said he chose to show fall “to align ourselves with the global world market. It’s just weird to do spring-summer right now because my clients don’t only live in South Africa. They’re very global.”

Already in their debut collections, Swanepoel and Rawjee have created their own look, joining the ranks of a few other local designers such as Jacques van der Watt of Black Coffee, Tiaan Nagel, Clive Rundle, Suzaan Heyns and Joel Janse van Vuuren, who showed accomplished and coherent collections during SAFW.