Minju Kim receives a cash prize of 50,000 euros, and the Swedish retailer will sell pieces from her collection. 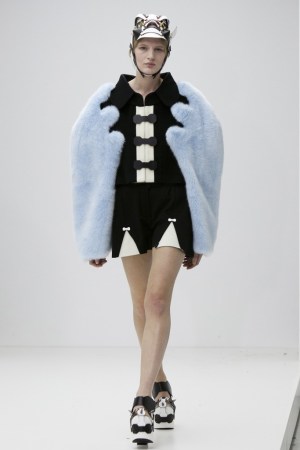 The 26-year-old, who is in her final master’s year of fashion studies at the Royal Academy of Fine Arts in Antwerp, Belgium, unveiled her collection Tuesday at Stockholm’s Mercedes-Benz Fashion Week.

She is to receive a cash prize of 50,000 euros, or $67,250 at current exchange, and H&M will develop pieces from the collection to be sold at select H&M stores in early fall. The Swedish high-street retailer invited students from 19 fashion colleges in eight European countries to take part.

“Drawing is the most important process of my designing,” she told WWD. “When I research, I visualize how I would transform it into images and as a next step I turn the images into my own drawings, and that becomes the basis for the collection.”

Despite its dark subject matter, the collection is upbeat, with outsize proportions and pastel colors lending it a cartoonlike quality. Kim, who is studying under Belgian designer Walter Van Beirendonck, said she looked forward to working with the H&M design team on developing pieces for a larger audience.

“This is something really, really new for me because ordinarily, I always work by myself,” she said. “It’s a really big opportunity and I feel really grateful right now.”

H&M’s head of design Ann-Sofie Johansson, who headed the competition jury, said Kim stood out in a tough field thanks to highly imaginative pieces that were beautifully executed. “For me, it was a ‘wow’ feeling to see the collection. It’s so creative and it’s very playful, and there are millions of ideas in each piece,” she said.

The choice of the young, avant-garde designer reflects H&M’s recent efforts to up its fashion quotient amid a tough economic environment for fast-fashion players. The retailer will stage its first fashion show in eight years on Feb. 27 on the sidelines of Paris Fashion Week, and is developing a new brand called & Other Stories.

“I think we want to show another side of H&M,” said Johansson. “We have our basics and we have the fashion collections, but at the same time also we have so many talented designers and buyers and patternmakers within the company, so it’s really fun to be able to make these collections also and to show their skills and their creativity as well.”

Visitors to the competition’s Web site, designaward2013.hm.com, voted to award the People’s Prize to Alba Prat, who has studied at Universität der Künste in Berlin. She wins a one-month internship at Jonathan Saunders in London.