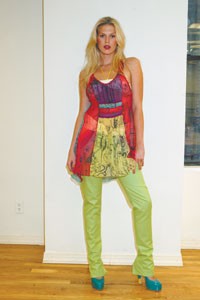 After some 20 years in the business of taking care of other designers’ clothes from bygone eras, Pattie decided it was finally time to make a collection of his own. For spring, he is launching Southpaw Pawe.wa, a collection of 54 pieces and three shoe designs.

“It seemed like a natural progression,” Pattie said. After all, over the years he has accumulated more vintage dresses, suits, separates and accessories than he cares to remember, ranging from the Civil War period to the 1980s.

His madcap showroom has become a place where fashion stylists look for finds, and many designers have been known to consult Southpaw’s assortment of Madame Grès, Poiret, Vionnet, Chanel, Balenciaga and Christian Dior for their own lines. Pattie also has an extensive selection from Stephen Burrows, including the personal collection of Burrows’ muse, Pat Cleveland, which he acquired five years ago.

Pattie’s daughter, Bridget; son, Jeffrey Patrick, and employees had urged him to start his own line, but he said he needed a final push. When the Marines came knocking at his door to sign up his son one day, Pattie, horrified by the thought, promised his son he would start the collection in return for his promise never to enlist.

“I was the most manipulative parent,” he said with a smile.

Pattie called the collection Southpaw Pawe.wa after the Native American words for “power and powwow,” he explained. The label’s tag line states, “He who dreams and derives his power from vision,” a sentiment Pattie feels he can relate to.

“I was inspired by rock ‘n’ roll from 1973 to the Eighties,” Pattie said. “I saw every major band, from Led Zeppelin to T.Rex to the New York Dolls. I saw the girls and boys who followed them…and my mind is still stuck on these groupies. It’s a girl who doesn’t want to be dictated to.”

Pattie has an extensive list of women and even some men as his design inspirations, and he named many of the looks after them. His muses include Keith Richards’ daughter, Alexandra, seen here modeling the clothes; Stella McCartney; Naomi Campbell; Daria Werbowy, and Farah Pigeon, whom he recruited from England to work for him 12 years ago.

Wholesale prices range from $90 to $1,400 and Pattie said the line targets upscale specialty stores. He added that first-year wholesale sales projections are about $1 million.

Next up? “For fall, we will start a small collection of men’s,” he said.