Trade show traffic is on the upswing and organizers here are responding with some new features for this year’s editions. 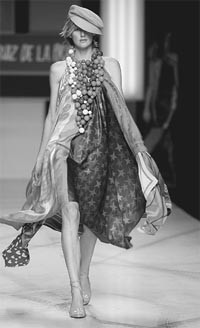 Spanish trade fair producers are in high spirits; their figures are up with the current year witnessing a surge in both attendance and vendor participation. Provided there are no unexpected global tragedies, the trend is likely to continue, they agreed. And in response, organizers are targeting an expanded international fashion offering, including additional product categories and fairs-in-fairs.

For instance, the Madrid SIMM show will introduce a classification at the Feb. 13-16 edition called Intima Moda, which will feature lingerie and hosiery in a 6,560-square-foot space, said director Pola Iglesias. To date, such international brands as Lovable, Playtex, Warner’s and Wonderbra have requested booths, she reported. The new fair-in-fair is in response to expansion requirements of the domestic innerwear sector, which last year generated sales of 334 million units.

In pavilion 3, Intima Moda joins SIMM’s traditional women’s wear pavilions 2, 4, 6, 8 and 10. In addition, Espacio Hombre (men’s wear), which debuted last season with 40 exhibitors, will move to pavilion 3. The men’s wear space will increase 20 percent in February due to a beefier vendor presence from Portugal, she added.

Madrid’s biannual apparel fair, SIMM, is the second largest in Europe after cpd in Düsseldorf. At the recent fall edition, vendor participation rose 7 percent over the previous year to 860 (half of which were foreign firms), with 8 percent more floor space or 101,350 square feet in the Juan Carlos I fairgrounds.

SIMM’s 25th anniversary fair, celebrated last August with open-air parties and industry revelry, registered a 10.2 percent hike in visitors over 2002, for a total of 25,569. Foreign attendance from 69 countries was up 29 percent to 2,550, according to recently published reports. Major buying groups came from Portugal, Italy, France, Mexico, the United Kingdom, Germany and Greece.

One of last season’s more relevant additions — a group of 14 U.S. exhibitors — will not be repeated in February, Iglesias said. The result of a deal between the U.S. Department of Commerce and IFEMA, the Spanish capital’s official trade fair organization, U.S participation was contingent on the summer season. No further details were available.

However, according to the fair’s commercial department, upcoming February estimates for the Madrid event include an increased vendor figure of 935 from 20 countries as well as a climb in floor space to 376,737 square feet.

Modacalzado, Spain’s twice-yearly shoe fair, in tandem with Iberpiel leather goods show, is scheduled for March 26-28 in the Madrid fairgrounds. It’s too early for news, according to Iglesias, who oversees both events bannered as International Leather Week, because contracts open later in the month for what booths are available, “and there are not many.” Iglesias said, however, she expected “increased global [vendor] participation.” Three of five pavilions are fully booked and the group of Italian exhibitors is growing in numbers, she confirmed, after IFEMA came up with a more strategic location in pavilion 4, which is generally reserved for higher-end products.

September’s Madrid leather fairs registered record highs. Leather week attendance increased 11 percent to 24,984, and exhibitor participation climbed 9 percent over the previous year to 737. This was despite a critical slump in exports, especially to the U.S. Shipments fell 22.3 percent for the first five months of 2003 to a meager 4.7 million pairs, valued at $112.71 million, down almost 24 percent over the same period for 2002.

Modacalzado exhibitors claimed little price resistance at the Spanish fair. The disparity between the dollar and the euro is no longer a major issue, they maintained, despite the U.S. currency’s drop of roughly 15 percent for the year. Global retailers are going to complain, vendors said, one way or another. Sales are more a question of whether stores are in the mood to buy. The key to selling is to what extent manufacturers can stimulate that mood. The product has to be right, too, they concluded.

Barcelona has three major fashion-related trade events: Noviaespaña (annually) and Barcelona Fashion Week (biannually). Next year’s dates for Noviaespaña, the highly successful bridal wear forum, have been moved up to June 18-20, which fortuitously — or otherwise — might coincide with the royal nuptials of Spain’s Crown Prince Felipe and Letizia Ortiz. (The wedding date has yet to be announced.) According to fair organizer Flaqué Internacional, upward of 145 vendors are expected for the June edition, and according to a spokesman, results will undoubtedly surpass this year’s figures, which totaled 13,114 visitors and floor space of 70,388 square feet in Barcelona’s Montjuic fairgrounds.

Barcelona Fashion Week focuses on the runway presentations, which are scheduled Feb. 2-6 in Montjuic’s fairgrounds. Out come the heavies, and they are considerable, from veterans Antonio Miro and Armand Basi to newer talents Ailanto, Spastor and Mireya Ruiz. Last September, about 40 designers/manufacturers took to the catwalk — and 26,000 people watched, reportedly — alongside a small trade fair, Salon Gaudi, made up of 297 brands stretching over 25,250 square feet. The next edition will run Feb. 6-8. Organizers claim it’s an international event, but it isn’t — at least not yet.