Prom is especially strong at AmericasMart. 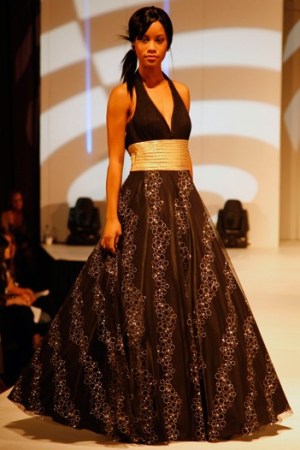 Showrooms hosted special events including an appearance by Miss America Kirsten Haglund at Putnam Enterprises showroom. Michelle Harrison & Associates Inc., a special occasion and sportswear showroom, auctioned 25 dresses for a local charity, with designer Shani requesting that every exhibitor in the Harrison space donate a fuchsia gown. Buyers made bids that raised $3,000 for Children’s Healthcare of Atlanta.

The show ran from Aug. 16 to 19, but many showrooms extended hours to reel in as much business as possible and accommodate buyers.

“We were pleased with attendance and it did meet our expectations,” said Chuck Corvi, project manager for apparel trade shows, who did not specify figures. “Market was a home run with prom and bridal.”

In addition to special occasion, retailers bought sportswear and dresses closer to season because of the tough economy, exercising caution in writing orders and coming to market with smaller budgets. Overall trends included lightweight, transitional fabrics; maxidresses; shrugs; scarves; cotton and knit T-shirts ideal for layering; vibrant pops of color, and lots of attention to draping, pleating and ruffles. Bodies were cleaner and moved away from baby-doll looks and Empire waists. Dresses prevailed again, focusing on mainly French- and Japanese-inspired construction.

“I bought carefully and conservatively, placing bigger orders of my important lines and was more selective about new resources,” Fraser said.

She purchased about 30 pieces each from Nicole Batki, Mignon and Adrianna for spring, but dropped a few lines, including Party Time and Jasz. Citing the slumping economy, Fraser decreased her budget slightly, but was “pretty optimistic for upcoming seasons since the price of oil is going down and the dollar is going up.”

Alison Nanninga, owner of Mint Boutique in Savannah, Ga., a 2,800-square-foot contemporary-to-bridge store, shopped for immediate deliveries of cocktail dresses, picking up 12 fall styles by Shani, to which Nanninga referred as her “bread and butter.” Shani is priced at $110 to $300 at wholesale.

“Especially with the economy in the shape that it’s in, you want something that pops,” she said.

Nanninga liked Shani’s sheaths with cutouts, full-fashion knit tops with woven bottoms and short, dip-dyed pleated dresses. She also scoured the market for sportswear, denim, accessories and shoes, mostly for spring deliveries, while not looking too far ahead.

“We’re selling resort and spring — we’re not doing immediates,” said Tom Carroll, principal of Carroll Apparel, a multiline contemporary-to-bridge sportswear showroom. “We’re not hearing any complaints about the economy and it doesn’t seem to be affecting our buyers.”

“Buyers are attending fewer shows, particularly those in New York, due to high travel costs,” he said. “They’re being much more selective and reluctant to travel to buy new goods.”

Carroll reported strong sales for Tolani, a four-year-old line of 55 scarves, which ships up to 800 units a day. Tolani, priced from $34 to $79 at wholesale, has a celebrity following, including Jessica Alba, Hilary Duff and Sienna Miller.

Rebecca Byrd, owner of Rebecca & Co., a contemporary boutique with Greensboro and Winston-Salem, N.C., locations, pulled back on holiday.

“With the way the economy is, we’re trying to hold it a bit closer to season,” Byrd said. “For holiday, we’re not going to buy unless we say, ‘Wow.’”

With denim representing 30 percent of her year-round business, along with sportswear and T-shirts, she shopped for color and fresh pre-spring styles.

“We’re looking for buy-now, wear-now pieces in silks that can transition,” Byrd said. “If it looks like summer, we don’t touch it.”

April Daze, owner of an eponymous contemporary-to-bridge boutique in Stuart, Fla., shopped for fall immediates and holiday, focusing on lightweight dresses. Her favorites were maxidresses by Language, cotton tie-dyed prints by Gypsy 05 and sportswear by Free People.

Sales this summer were up 20 percent because of moderate pricing at $40 to $200 retail.

“A person will spend $150 on a dress and not beat herself up about it,” she said.

“I’ve felt a change of tides [in consumer shopping] in the last few weeks,” she said. “I usually increase my budget, but not this time.”