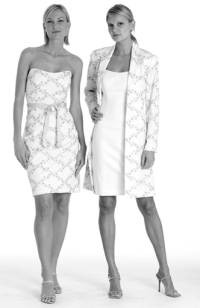 NEW YORK — With spring merchandise hitting the floor this month, daytime dress vendors across a variety of price points are gearing up for their top-performing season.

According to vendors, department stores have already started reordering merchandise on buys that were already ahead of last year — a key sign for a healthy season. According to NPDFashionworld, the dress and skirt market accounted for $5.3 billion in sales in 2002. For day dress departments in particular, the spring season represents a major portion of the business.

Jeff Binder, vice president and divisional merchandise manager for dresses, coats, suits and swimwear at Bloomingdale’s, said the store will increase its contemporary dress zone, which carries lines such as Shoshanna, Diane Von Furstenberg and BCBG, to all 26 locations in 2003.

Overall, Binder said he will increase the contemporary day dress category by a low-double-digit percentage this year.

“I’m bullish on daytime dresses in Bloomingdale’s,” Binder said. “We had a very good fall season and we’re currently reordering for spring.”

Retailers and vendors said dresses are popular because they’re a complete look and are an easy wardrobe choice. However, the selection for daytime dresses in the past has too often been a simple sheath dress meant for the office. Since contemporary styling sparked an interest in the category, according to Binder, daytime dresses are seeing a revival among several price points.

Bud Konheim, chief executive officer at Nicole Miller, said daytime dresses under $200 is the hottest price point. The spring dress business represents about 60 percent of Miller’s annual volume of $61 million, according to Konheim. Daytime dresses represent about 20 percent of that figure.

But designing a daytime dress for a specific use is irrelevant, since nowadays it’s difficult to tell what a women will wear to the office or the theater, Konheim noted. Instead of focusing on what’s right for a store’s department, he said the key for a strong day dress business is to offer something fresh.

However, that doesn’t mean tried-and-true styles should be overlooked.

“Our dresses are like comfort food,” said Felicia Marie Geller, vice president of Shoshanna, which ended 2002 with a 50 percent increase in volume, although she declined to give a dollar figure. “We’re not reinventing the wheel here.”

Geller said she attributes the increased performance to the consistency of the dresses, which retail for $215 to $350. Shoshanna is known for colorful sundresses and Fifties influences.

Increasing distribution in the Northwest, notably Washington and Oregon, is a key focus beginning with the fall collection, Geller said, noting that another 50 percent increase is expected this year.

Currently, the South and Northeast are the top-selling regions, especially in resort markets such as Palm Beach, Fla., Nantucket Island and the Hamptons in New York.

Shoshanna increased her dress selection to represent about 75 percent of the line, compared with past seasons where it was 50-50 dresses and separates.

For Unger by Kay Unger, dresses using daytime fabrics in silhouettes normally associated with eveningwear are selling — so much so that her accounts are reordering spring merchandise.

“Merchandise is turning quickly and buyers are not at all reserved with orders,” said designer Kay Unger. “The silhouettes in daytime dresses don’t really change that much, so the fabric and the treatment must change. It’s all about texture and newness and that’s how I get people to buy. When they have to have it, they find a way to wear it or they buy it to save it.”

Trends at Unger include soft fabrics such as voiles and cotton piques with spandex. Colorful and conversational prints on daytime dresses, such as paisleys and florals, will continue into summer with more intense colors. While Unger said prints don’t normally translate for fall, this year she will continue them on velveteens, corduroys and wools.

At Donna Ricco, however, the dressy separates business is on the rise for the third and fourth quarters this year, said the designer, noting there is a need for better priced items in those categories.

With Macy’s West, Donna Ricco president Tom Puls said they have increased their open-to-buy about 15 percent this year and expects about a 5 percent increase in volume. Currently the company’s volume is between $28 million and $30 million.

Other department stores that have increased business with Donna Ricco include Lord & Taylor, Filene’s, Burdines, Parisian and Saks Fifth Avenue, according to Puls. “In order to be successful, I have to listen to my customer,” said Ricco. “And the merchandisers told us they have customers saying they had nothing to wear during the daytime. As good merchants, they told us what they wanted.”

The result is a smaller group of cotton sateen dresses and vintage-inspired dresses in solid colors. The polished look differs slightly from Ricco’s soft bias-cut dresses, which are more contemporary in feel. The $130 retail price point will remain the same, however.

The new group represents about 25 percent of the collection, just enough for retailers to try some new items and increase their buy, Puls said.