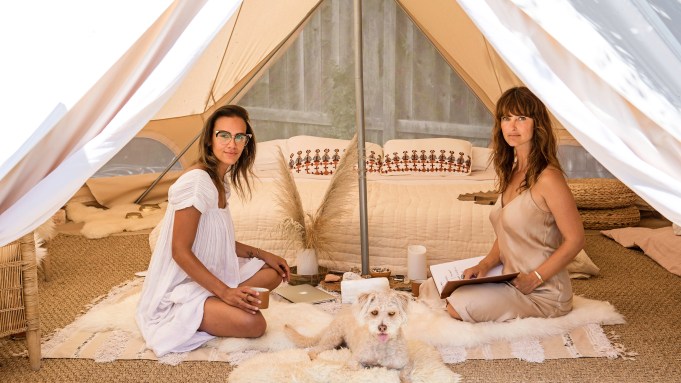 Well, why not? It couldn’t get much worse.

California has always been on the cutting edge of spiritual lifestyle trends — from the Esalen retreat center leading celebrities and counterculture seekers in the Sixties, to Madonna popularizing the red string bracelet-wearing mystical tradition of Kabbalah in the early Aughts, to Gwyneth Paltrow preaching the gospel of Goop with her spiritual adviser Shaman Durek today.

And this summer, even as hate dominates the headlines, spiritualism is in. After being freed from Sweden ahead of his assault trial ruling, A$AP Rocky went straight to Kanye West’s Sunday Service to give thanks. (In July, West filed paperwork to trademark his church-themed merch. Fans got their first look during his Easter Sunday Coachella set in April, when he sold his branded eight-piece collection, including neutral-hued $70 “Trust God” T-shirts and $225 “Holy Spirit” sweatshirts. Yes, I bought one.)

Kidding aside, West’s communion of celebrity, music and fandom was uplifting (and fun), and the feeling is resonating among today’s next-gen seekers, who are looking for something beyond their own personal digital screens: a way to expand their minds, whether through cannabis, crystal devotion or just singing songs and wearing the same pricy T-shirt.

Business is booming for the L.A.-based chain of metaphysical superstores House of Intuition, which attracts shoppers with its friendly service and clever motto scrawled on the wall, “Your Intuition Led You Here.” Last month, founders Alex Naranjo and Marlene Vargas opened their seventh store, in North Hollywood, with a Miami location to follow later this year, and a book and tarot card deck in the works.

“This trend is here to stay…it’s a movement. We’re all seeking something different than traditional religion. It’s a great base, but the children of today are not going to church every Sunday, to catechism and confirmation. They have more creativity, are connected to the earth and their bodies. That means everything has to change…wardrobe has to change, the way we sell products has to change, eateries have to change,” said Vargas, whose bestsellers are HOI-branded devotional candles, followed by loose crystals, which make up 14 percent of sales.

“I do think we can touch different categories — fashion, beauty, hair,” said the entrepreneur, who has collaborated with Urban Outfitters but turned down an offer to do shops-in-shop at Saks Fifth Avenue.

On Thursday, to coincide with the Lion’s Gate, the annual astrological alignment between Aug. 8 and 12 that is prime time for a cosmic download, nine-year-old L.A. brand Mother Denim will release a “Mystical” capsule collection with cheeky “Don’t Trip” and “Let’s Get Metaphysical” T-shirts, as well as new denim fits with leather pouches attached filled with curated crystals to manifest various intentions.

“All the kookiness that was once associated with California is being accepted everywhere,” said Mother denim cofounder Tim Kaeding, who practices yoga and meditation daily. “People are more open now. All the younger people who work here couldn’t be more excited about this capsule. They all have crystals on their desks. This lifestyle is more organic for them to gravitate to than sitting in a church pew being told what not to do.”

Some founders suggest what makes this wave of fashionable spirituality different than ones that have risen in past years around the Virgin Mary or Shiva goddess, for example, is that it dovetails with the wellness movement, the rise of sustainability, inclusivity and health as values around purchasing.

“This is clothing as wellness,” said Ana Puello, a kundalini yoga instructor. She and former model Jenn Mellon are behind Divine Feminine, a collection of dresses designed to empower women to connect with and activate their inner Queen, Warrior, Sage or Lover, with corresponding handmade, draped cotton gauze styles. They come with mantras such as “I have something to give” and “My intuition is guiding the way.” The two women run their fledgling business out of a white fabric tent decorated with crystals, twinkle lights and sheepskin rugs behind Mellon’s Laguna Beach home, where they have ceremonial workshops using energy work and meditations, which end with dress shopping. (They’re also wholesaling at Fred Segal.)

“It’s a brand for women to take back their power on their own terms,” said Mellon, who is inspired by the ancient feminine clothing of Egypt and Greece, and who saw the name of the brand in a vision after watching the 2009 film “Agora.”

See Also: Exploring the Real ‘Once Upon a Time in Hollywood’ Locations

“I swore off the fashion industry because I thought it was disempowering for young women,” said the model, who worked from age 12 to 26. “For me personally, this is a way to take all that back…This is dressing the modern goddess. We want to use this brand as an opportunity to build community, and use our gifts to teach and give people beautiful clothing.”

Not everyone is convinced capitalism can fill the void. “Spirituality is big business and one of the complaints is it’s become so commercialized it’s just another consumer product,” said Diane Winston, Knight Chair in Media and Religion at USC’s Annenberg School for Communication and Journalism, who has written about religious garb. “People want to believe and have hope and think there is a better future. And when religion doesn’t offer it to them, they turn to spirituality.…Clothing manufacturers understand the need and profit from it.”

But it doesn’t have to be so black and white, others suggest.

“We aren’t about to sell all our possessions and go into an ashram,” said Courtney Abbiati, cofounder of an L.A.-based line of personalized crystal gift boxes called Urban and the Mystic, which has celebrity fans including Kim Kardashian (The Baby Box) and Nate Berkus (the House Blessing Box). “You can be in the world and love nice things and be spiritual.”

Abbiati was working in estate management and buying crystals for wealthy people like Elton John on the side (average prices $30,000 to $150,000) when she brought the idea for the gift business to her boss, Sydney Holland. The owner of Rich Hippie Productions and former companion of Sumner Redstone, Holland is also a real estate investor who had been having success flipping houses in L.A. with some metaphysical intervention. (“I bought a house from Jessica Simpson and flipped it to Jennifer Lawrence. She begged for the crystals, which were strategically placed,” said Holland. “My model of flipping, with the crystals it’s so easy.”)

The two launched their business in October, and now have 14 themed gift offerings, including a Bereavement Box and Bride Box. The hand-engraved sustainable oak boxes come with an organic candle, an onyx bowl with sage to burn, a journal, assorted crystals sourced mostly from the Himalayas and a card about how to create a moment for yourself.

“The idea was to package it so beautifully and make it so easy to understand that even my 68-year-old mother could see this is a way to bring peace and happiness and calm you down,” said Abbiati. Added Holland. “People just want to feel better.”