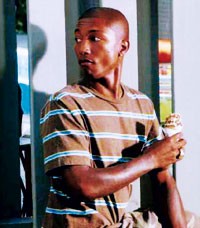 NEW YORK — Hip-hop is moving closer than ever to the sports field.

As athletic brands build their fashion quotient, they continue to reach beyond sports for endorsers — and increasingly the choice is music artists who bring a hip edge to the brands. Both fields need each other — CD sales are slumping, while athletic firms are searching for new ways to market themselves in an era when there are fewer superstar athletes.

Sneaker sales have been on the rise since 1999, when they stood at about $14 billion, according to the Sporting Goods Manufacturing Association. In 2003, consumers spent $16.4 billion on sneakers, up from $15.2 billion in 2002. But in today’s celebrity-fueled world, young people don’t look up to sports stars as much as they used to, industry executives admitted.

Thus the rush by sports brands into other cultural corners. Fila, for example, has developed a shoe for the hip-hop dance band Crazy Legs and the Rock Steady Crew, which will be in stores later this year. Reebok International has been the most aggressive, having signed on Jay-Z, 50 Cent and Pharrell Williams, and Adidas on Tuesday announced a deal with Missy Elliott for a comprehensive fashion line.

For Adidas, the Elliott deal takes the company away from its performance roots, but the German giant has other business concerns to address since it has had recent difficulties in the American market. “We need to focus on what we can do for our American consumer,” said Joe Flannery, the company’s global director of sport heritage.

The linkup between Elliot and Adidas for the new Missy Elliott Respect M.E. collection represents several departures from past efforts. For one, most of the long-term arrangements between rappers and athletic brands have mainly focused on one item, namely sneakers, and have been with male artists. Elliott’s line will be a comprehensive one made up of apparel, footwear and accessories for women.

The line also takes Adidas into new territory, since the brand has long stressed its performance heritage over its fashion one.

“We are a sports brand and everything we do has to be sports-inspired,” said Flannery. “But our collaboration with Missy Elliott allows us to reach out to a younger consumer. That is very important for us.”

Rob Callender, senior trends manager at Northbrook, Ill.-based Teenage Research Unlimited, said: “It is a very clever move for Adidas to sign Missy if they are looking to grab on to a younger audience. Missy does skew young. Any popular hip-hop artist can do well for them. Hip-hop music speaks to this generation of teens in the same way that rock ’n’ roll has historically spoken to them. Parents dislike hip-hop today just as parents disliked rock music in the past.”

Reebok is taking a similar approach to connecting with younger consumers via the music they listen to. In addition to the arrangement with Jay-Z, the company has signed deals with 50 Cent’s G-Unit to launch a line and, more recently, with music producer and performer Pharrell Williams for a collection of men’s and women’s products. “The blood of our brand has to be around youth,” said Que Gaskins, vice president of marketing for Reebok’s Rbk division. “And youth are more influenced by celebrities and musical artists these days than by athletes.”

Nonetheless, he said that the musicians the company chooses, especially Jay-Z, are also known to have a connection to the athletic world.

Some critics thought Reebok International was taking a huge risk last year when it rolled out a line of sneakers endorsed by Jay-Z, a rapper who uses explicit lyrics and is known for his tough persona. But the collection, called S. Carter by Rbk, sold-out immediately, and helped institute the new wave of hip-hop inspired marketing and collections from athletic brands. Gaskins said one reason why Reebok chose to create Rbk is to segment its business so that consumers don’t get confused and can separate its performance offerings from the hipper, music-oriented lines.

Gaskins said the company is now looking carefully at female artists to see who it could work with. Reebok has had special collections with Shakira and Mary J. Blige and featured Missy Elliott in some of its marketing, but has yet to sign the kind of long-term deal with a woman that it has with the male artists.

“As we look at women artists, we want to find out who could be the next icon,” he noted. “It can’t be someone who is a singer or who just sells a lot of albums. It has to be someone who brings something extra.”

Trend watchers said the music industry is giving the athletic world a much-needed shot of energy.

“In the short term, it’s a very easy solution for the big problems these athletic companies are having,” said Ryan Berger, a strategic trendspotter for Euro RSCG MVBMS Partners who is responsible for the promotional deal between hip-hop duo Outkast and Polaroid. “Even the athletes these companies are promoting these days are more rugged and rough than they used to be. That’s keeping to the whole street theme — like Allen Iverson and Reebok, for example.”

Berger believes the team-up between Adidas and Missy Elliot will be successful — as long as she’s at the top of the charts, that is.

“It will be good for both parties as long as Missy can stay hot,” Berger said. “On the music end there are problems with business and the sneaker business is also hurting. So it makes sense that the two businesses are coming together to figure out how they can make more money.”

“The whole music and sports connection is a natural one,” said David Wolfe, creative director at the Doneger Group. “This, in a way, is a spin off of the casualization of American sportswear — and as a bonus, it feeds our celebrity obsession. It makes sense. Hip-hop consumers know about sports and athletes know about music.

“This type of team-up is a long-term thing,” he said. “The names will change as time goes on, but there will always be that hot new celebrity to connect with.”

But one company that is notably absent from the world of hip-hop is the biggest athletic brand of them all: Nike. The giant has done a few footwear collaborations with rappers such as Eminem, Nelly and Williams and has made custom items for hip-hop artists, but has largely stayed away from the music arena and continues to focus its endorsement and marketing activity on athletes.

“From an overall brand perspective, we may be open to opportunities similar to this in the future, but our position will always, first and foremost, be one founded in performance,” said a Nike spokeswoman.

While hip-hop’s influence on fashion has grown dramatically in recent years, at least one connection between rappers and athletic brands can be traced back to the mid-Eighties, when influential rap group Run-DMC professed its love for Adidas. “My Adidas and me, close as can be,” the group rapped in their 1986 song “My Adidas.”

More recently, lines from popular musicians have conquered the fashion world both for men and women. Brands like Rocawear and Sean John, JLo by Jennifer Lopez and Fetish by Eve have snapped up floor space in many retail channels, and even traditional retailers like Bloomingdale’s and Macy’s have dramatically pumped up their offerings of these lines. Missy Elliott’s collection, which launches in the U.S. in September, is targeting department stores, specialty chains and urban retailers.

And the lines between the urban apparel market and athletic wear have long been intertwined. Early looks from Phat Farm and Fubu were focused on tracksuits and athletic-inspired apparel, and urban-oriented retailers such as Dr. Jay’s have always carried athletic labels such as Puma and Adidas. Athletic-oriented retailers have been stocking up on items that have been embraced by the hip-hop crowd. Brands such as The North Face, which got its start as performance outerwear, became a favorite of hip-hop artists and other urban customers, which in turn helped fuel its sales at athletic retailers, said a spokeswoman at Paragon Sports. This year, Foot Locker, a purely athletic chain, picked up Team Roc, Rocawear’s athletic division.

But as athletic brands and rappers move closer together, some industry executives wonder whether these arrangements are discrediting the performance element of the business. But other observers believe musicians offer a safer bet than athletes when it comes to endorsements.