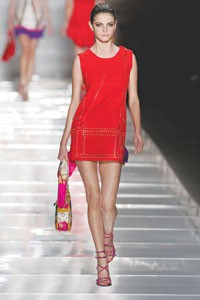 Chanel: Coco meets James Dean. So read the translucent band that fastened the pile of photographs inside Karl Lagerfeld’s press kit for his spring Chanel show. Qu’est — ce que c’est — a butched-up garçon? Perhaps, but the backdrop at the Grand Palais was a shirred bubblegum pink curtain behind a huge CC-logoed computer screen. A multitude of messages? Mais oui.

Since Lagerfeld first put boys on the runway several season ago, he toyed with gender-bending in ready-to-wear, directing all things overtly chichi to the loftier bastion of haute. He also seems to have reserved his focus for couture. It’s hard to believe that someone could brilliantly develop as singular a concept as he did in his July couture — 50 coats with indulgent secret embellishments inside — and the next time out let loose with a cacophony of clothes packed with so many ideas it left one’s head spinning in utter confusion.

Clearly, Lagerfeld has men’s wear on his mind, and once again put it on the runway. The verdict: jeans, yea (for men man enough to brandish double-Cs on their behinds where once there were Levi’s logos); sweater dress over jeans: nay.

As for masculine sportif for women, some nifty jeans and a girl in a fedora and tweed coat (apparently almost naked underneath), set the audience up for a significant leitmotif. But beyond a major exploration of shorts — they came in everything from yellow jacquard denim with a purple tweed jacket to black lace bicycle shorts over briefs — the fleshing out never happened. Rather, Lagerfeld was too busy spewing thoughts in every direction — belted tweed dirndls, suits in blinding brights, even more blinding artsy prints, exuberant Fifties party frocks, calm Sixties party frocks, and on and on and on. All of which should make for a shopaholic’s delight come spring — unless she’s looking for clarity of message.

Louis Vuitton: On Sunday night, the gold-gated façade of the Petit Palais, site of Marc Jacobs’ spring Louis Vuitton show, was all aglow with an illuminated projection of the LV monogram. A harbinger of flash to come? You betcha. So au revoir, discretion. Adieu, sobriety. Bienvenue, fun times, brash clothes and a petite homage to Versace, all of which Jacobs served up in what he called “a celebration of status and luxury.”

Certainly Vuitton has much to celebrate, starting with its newly renovated flagship. So how could the stars stay away? Out they came, Winona, Uma, Salma, Eve, Jade, even Bob Geldof, and the gal who trumped all, Sharon Stone, done up — no kidding — in head-to-toe black, looking like the just-widowed Wicked Witch of the West.

She made for the evening’s only dark presence (aside from the over-exposed Marilyn Manson), as Jacobs let rip with a bounty of rich-girl play clothes with attitude. They came short and shorter, bright and brighter, invested with sharp graphics, vibrant linings, chunky bead embroideries and a healthy dose of the Eighties. While structure dominated, Jacobs’ saucy jerseys and flyaway carwash voiles with mega paillettes diversified the lineup, as did a nod to Pocahontas, who appeared to have set sail from Miami.

Though not Jacobs’ best collection for the house, it was lots of fun, making a crowd-pleasing antidote to a largely dull season. More importantly, it should should prove a retail blockbuster around February or so, when all those Vuitton vixens will need just the right outfits to go with their new collectible bags.

Let’s face it, terrific as the clothes have been, handbags steer the Vuitton ship, and no one knows that better than Jacobs. Murakami — been there and done that? Not when it’s layered over with multicolored fringe. Girls with limitless logo yearnings can get their spring fix in a sturdy patchwork of house symbols. And in the good-taste-has-its-limits category, Jacobs proposed bright patent bags with brassy hardware and others in plastic-laminated scarf prints with that duty-free je ne sais quoi.

Yves Saint Laurent: It’s been an odd ascent for Stefano Pilati at Yves Saint Laurent — high drama going in followed by considerable buzz and some major editorial kudos. While it’s probably too soon for that to translate into a retail punch strong enough to dent the company’s $40 million in losses, it is high time to expect clarification on the designer’s vision for the house, something that has been a bit enigmatic until now.

In the collection he showed on Sunday, Pilati took a significant step in that direction, providing the clearest expression yet of his thesis — a polished sportif chic achieved through the counterpoint of smart tailoring and bold decoration. It made for his best collection to date. Pilati dipped into the house history, mining his basic theme from the maestro’s Spanish motif, then keeping his references so discreet one barely noticed them. His preferred silhouette: clean and lean with an Eighties cast to the cut, with demonstrative frills softening the inherent precision. The most successful renderings came in toreador pants paired with ruffled shirts and little jackets or, in a charming variation on the motif, short sweaters worn as wraps, sleeves tied tightly in front.

Still, certain problems remain. Pilati showed an awkwardness with skirts in constricting hobble shapes as well as lantern versions that shed too much light on a gal’s hips. In addition, so much ball fringe might make more sense on a couch. Nevertheless, legions of women long for straightforward, dressed-up sportswear, and as Pilati continues to refine his message, he could become their go-to guy.