Sports Firms Race to the Marathon

ACTIVE: With 30,000 participants and 2.5 million spectators, the NYC Marathon is big business and activewear firms are getting in on the action. 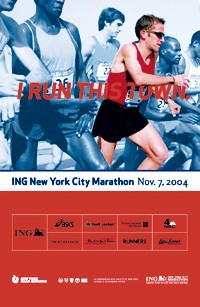 NEW YORK — With more than 30,000 participants and 2.5 million spectators, the ING New York City Marathon is big business, and many sport companies are getting in on the action — as well as the selling opportunities.

Among the principal sponsors are Foot Locker and Asics, and firms such as Reebok, Puma, Adidas, Nike and Paragon Sports are holding events and activities to coincide with the marathon.

The 26.2-mile race, which marks its 35th anniversary this year, has become one of the nation’s premier sporting events, drawing participants from every state and some 100 countries. The marathon on Nov. 7 will traverse the five New York City boroughs. Television coverage is planned in 125 countries, and more than 220 million people are expected to watch. Ann Hinegardner, vice president of sales and marketing for the New York Road Runners Club, which organizes the race, said more than 75,000 people applied to run this year.

The marathon always has a festive feel, but this year it is taking on even more of a carnival atmosphere. For the first time, there will be five kiosks along the route where spectators can buy official marathon merchandise, and more than 60 bands will perform along the route, almost double last year’s number. Also new are five festival-style entertainment zones that will be created within local communities along the course featuring music, special staging, raffles, giveaways and in some locations, giant screen JumboTrons.

“We wanted to make it more of a party atmosphere,” Hinegardner said. “We are looking to enhance the marathon experience for the runners and the spectators.”

A major selling opportunity for brands is the Health and Fitness Expo, which is at the Jacob K. Javits Convention Center for four days leading up to race day and showcases about 100 exhibitors. Companies can now sell products at the Expo — until two years ago, they were not allowed to do so — and most big apparel and footwear brands will have a presence, including Nike, Adidas, Reebok, Puma and Saucony, as well as stores such as Foot Locker and Paragon Sports. All of the runners are required to go to the Expo to get their race materials, and more than 75,000 people attended the show last year, Hinegardner said. It is also free and open to the public.

“From a brand perspective, it’s very important to be at the Expo and have a presence at the marathon,” said Lori Rose, Reebok’s category business director for women’s apparel.

The official marathon booth at the Expo selling cobranded products from Asics and NYRRC will be about 15,000 square feet. For Asics, the marathon is its most important event of the year, said a company spokeswoman. As the sole apparel and accessories sponsor, Asics develops the official clothing line for the marathon, which will be available at the Expo, the merchandise kiosks and at some stores around New York. The extensive line includes windbreakers, long-sleeve running shorts, singlets and pants, with products for the runners and spectators. There is also a selection of accessories such as hats, gloves, duffel bags, backpacks, socks and gloves.

“Our goal is to expand our sales,” Hinegardner said, noting that last year, sales of official marathon merchandise were more than $1 million. “We are a not-for-profit organization and this is a way for us to grow.”

The merchandising push will continue the day after the race. There will be a booth set up at Tavern on the Green in Central Park, where participants can purchase marathon merchandise and get their medals engraved, Hinegardner said.

Asics is partnering with Athlete’s Foot to mount billboards around the city. In addition, Asics-sponsored athlete Deena Drossin Kastor, who took home a bronze medal in the women’s marathon at the Olympics, is looking to be the first U.S. woman to win the New York marathon since 1978.

Foot Locker will have signage throughout the course and will push marathon-related apparel and accessories at its stores, said a company spokeswoman. The company is again holding its Foot Locker Five Borough Challenge in which five runners are chosen to represent their borough at the marathon, all of whom are teachers this year. The “race within the race” winner will receive VIP treatment after the race, as well as special gear.

Nike will have its Nike Runner’s Lab at Niketown here Nov. 3-6. The lab features gait analysis — on-site footwear specialists analyze runners’ strides — as well as a photo booth, T-shirt screening and products for sale from the company’s fall and holiday collection. Nike has a marketing campaign under way in the city with billboards and bus wraps, and will offer post-marathon massages.

For Reebok, the marathon coincides with a company-wide push into the running arena. Reebok has expanded its offerings in this area, and this year undertook an advertising campaign aimed at running. Many of the images feature women. At the Expo, Reebok will showcase running-specific merchandise from its Premier Running series, as well as items that may be worn for other activities such as tennis, Rose said. “We are offering more for female runners, including more color,” she noted. “We are making an effort to improve our performance products, and we have a layering system we will showcase.”

She added that the Reebok store on Columbus Avenue and 67th Street in Manhattan will also be showcasing these items and will have signage and graphics related to the marathon.

Adidas, meanwhile, plans to offer a sneak preview of some of its newest shoe styles for 2005, and sell running apparel at the Expo. In addition, the company’s sponsored athlete, nine-time marathon winner Grete Waitz, will be at the booth to sign autographs and meet fans, said a company spokeswoman. Adidas will highlight footwear and apparel from its AdiStar line, including products designed for winter running.

And Paragon Sports, which will have a presence at the Expo, is sponsoring a bus from the event to its Union Square store, where it will host visits from elite runners and other activities. Stores such as Macy’s and City Sports have running-related signage in their windows, and sport chain The Running Company will open its first New York store at the Time Warner Center. Puma is partnering with the company to market the opening.

There are also a spate of new sponsors for the marathon, including pasta brand Barilla, eBay and the Kenyan Tourist Board, as well as a comprehensive media campaign running in New York and a few other cities based around this year’s theme: “I Run This Town.”

“This is one event that the city shuts down for,” Hinegardner said. “Many people come out to celebrate, and since this is our anniversary, we wanted to improve ourselves this year.”