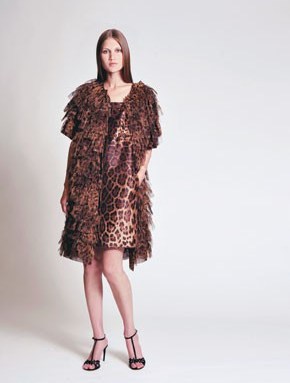 Domenico Dolce and Stefano Gabbana take a walk on the wild side with their cruise collection for Dolce & Gabbana. And they do it by working their animal prints in amusing ways, as in this feathered chiffon and taffeta coat, thrown over a taffeta sheath, both in silk.

Slick, snappy signatures. That’s the mood at Dolce & Gabbana, where Domenico Dolce and Stefano Gabbana worked up a vast collection rooted in the feminine-masculine dichotomy they love. On the girly side, their corset dressing takes an appealing ladylike turn in pristine whites with a whiff of Sicilian retro, while spots go glam in a leopard pattern and madcap in mixed prints. The guy side comes out in street-smart jackets and jeans worn with rock ‘n’ roll attitude.

“It’s for the city, but a little bit country,” Nina Ricci’s Olivier Theyskens said during a showroom presentation on Monday. “Is it like those people you have here, the Mormons?” Told he more likely meant the Amish, he shrugged in agreement, but these clothes are hardly homespun. Rather, they’re ultrachic in the gentlest way — nonchalant separates in mixed textures and pale tones; dresses that fall loosely in random pleats and layers, as well as a shapely bustier dress-and-blazer combo. And oh, yes, you know resort has really arrived when a designer uses it to launch a major accessory: Check out the boots.

Georgina Chapman has been musing about treating her mom to a cruise down the Nile on the Oberoi Zahra. “I was becoming obsessed about it,” she said on Monday. And since there’s no better way to work through such an obsession than fashion, it’s not surprising that her Marchesa collection is all about the Egyptian goddess, often in lovely white dresses spiffed up with gold. As for the trip itself, her mother might not want to pack just yet. With a Cleopatra-worthy cruise lineup now under her belt, Chapman is “kind of over” the real cruise idea, she says. Sort of the way many of us feel five weeks into resort.