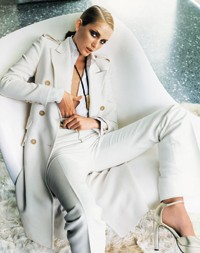 Up until the Sixties, the ads clearly heralded top-quality craftsmanship and Gucci’s Tuscan origins via black-and-white stills of bags against Florence’s Palazzo della Signoria or on the banks of the Arno river.

The first real change came in the early Eighties, courtesy of Maurizio Gucci, who hired a young photographer named Bob Krieger to up the fashion quotient.

“Those were the days when Milan was emerging as a fashion capital for ready-to-wear and Maurizio wanted to be part of that world,” said Krieger in a phone interview. “We wanted to depart from the concept of showing Florentine products by promoting different kinds of glamour, à la American Vogue.”

Krieger shot four Gucci campaigns in 1982 and 1983, one of which featured model Carol Alt in a fringed and belted coat against a gray backdrop.

Irvin Penn continued in a similar vein a year later, while Fabrizio Ferri shot Andie MacDowell in a white silk evening gown bordered with red and blue trim in 1985.

The late Eighties and early Nineties were characterized by still life shots of accessories with a horsy feeling, alternatively shot by Ferri, John Goodman and Lance Stadler.

In Dawn Mello’s era in 1992, Ferri zoomed in on a brunette model, sprawled out on sand dunes and clad in a printed silk blouse.

The following year, Gucci suspended advertising while sorting out its ownership problems.

In 1994, though, Mello focused on clean stills by Raimond Meier. “The new look is quite different from the past, but the idea was to build awareness of the quality of the Gucci images,” said Mello in June 1994.

Propelled by the success of Tom Ford’s first solo efforts in 1995 and 1996, Gucci spent $31 million on advertising.

Jeff McKay, owner of the ad agency bearing his name, said Gucci reflects “the way everyone wants to live and look right now. The interiors are so slick and modern. It’s so sexy — I want to be there.”

Testino’s lens captured most of Ford’s steam until spring 2005, when Craig McDean took over.

Two moves highlighted 1997: Jay Zuckerkorn took the still life shots “in order to evolve and create a noticeable change in style,” according to a spokeswoman, and Testino filmed a gaggle of models with a digital camera on a New York loading dock and then shot stills of the film for a surveillance-camera effect.

But Ford really turned up the heat — and the controversy — when he featured a female model with her pubic hair shaved into a G. In front of her, a man kneels, his face heading for the “G-spot.” In that same campaign, images of Louise Pedersen sprawled across Adam Senn’s knees, as if she’s about to be spanked, were described as “sexy and chic” by Ford.

When Giannini took the helm, she made it clear that in-your-face sex wasn’t her style.

So while she hung on to Craig McDean, she opted for reportage-style images with a twinge of Seventies nostalgia for spring 2006. She channeled a new optimism with soft natural light and sunspots. For fall, she transformed that mood for evening.

“It’s a very different feeling,” said Giannini. “It’s as if the girls were leaving a party to head to a club. To me, it’s very new for Gucci.”