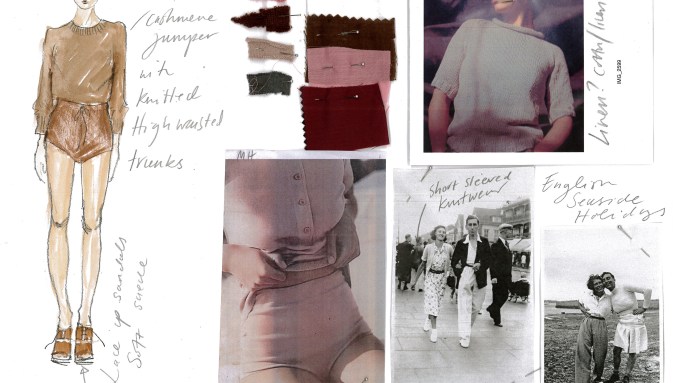 From artworks to English gardens and youth culture, London’s designers share their sources of inspiration ahead of their spring shows.

“The starting points for the spring 2017 collection were the primitive, raw beauty of the body painting and decoration of the Omo Valley tribes, the elegance and femininity of Seydou Keïta’s portraits taken in Mali during the Fifties and early Sixties and a humorous dose of early Nineties ethnic chic” — Serafina Sama, designer, Isa Arfen

“I was looking at Miami and its art scene in the Seventies and early Eighties when it was still riding the wave of pop art. Artists like Yoko Honda, who were inspired by pastel hues of the city’s archetypal architecture became the starting point of the embroidered graphics in the collection. Seventies-inspired stripes are also a key part of the new range, developed into optical illusions, inspired by artworks of the era” — Roberta Einer

“This season, I have referenced life under the sea. I have been inspired by the vivid colours and complex textures, and the way these translate into three-dimensional embroideries. It has also lead me to develop new embroidery techniques, which result in bursting and colorful coral detailing, which is almost jewellike; and I’ve played with hand-beading on fabric mediums I’ve used for the very first time” — Alice Archer

“All proportions are distorted by a small percent” — Phoebe English

“Dream if you can a courtyard, an ocean of violets in bloom‎” — Antonio Berardi

“A desire for nature, a meadow full of surprises, a sense of individuality, ease and a youthful spirit” — Markus Lupfer

“We’ve been captured by the grit and reality of Glasgow. Harking back to the early 20th Century of Charles Rennie Mackintosh right through to the current day youth culture and LGBTQ community. SS17 is about Glasgow’s story of inclusivity and its fearlessness towards those who are different” — Teatum Jones

“Florals have often featured heavily in my designs and for my spring 2017 women’s collection, I’ve explored lots of different interpretations. Starting with hand-drawn florals, I’ve explored different methods of printing and use of jacquard. I’ve also taken inspiration from garlands, daisy chains and even floral friendship bracelets. In pretty gloomy times, an optimistic collection bursting with flowers seems just what we need” — Paul Smith

“Lady Rhoda Birley inspired this season’s collection. She would make fish stew and sometimes would forget that she was making it for the garden, so she would add a bit of cognac, some garlic and spices. The roses would almost cry out with pleasure” — Peter Jensen.

“A step into architect Frank Lloyd Wright’s world of structural shapes and his genius quirks in design as well as into a world of intimate escape inspired by American-style motels” — Emilia Wickstead.

“The colors are strong but natural. The palette takes its cue from English summer gardens with shades of pink, from deep Camellia to delicate Rose. Earthy rich browns in cashmere and linen make for a seasonless neutral palette when mixed with crisp white and black. The silhouette is relaxed, relying on carefully chosen fabrics cut in clear, simple styles. The emphasis remains on the waist with trousers casually belted. The attitude as always is unselfconscious, natural and confident” — Margaret Howell

“Beauty, drama, a hint of darkness, a lush love of form and color.” — Huishan Zhang