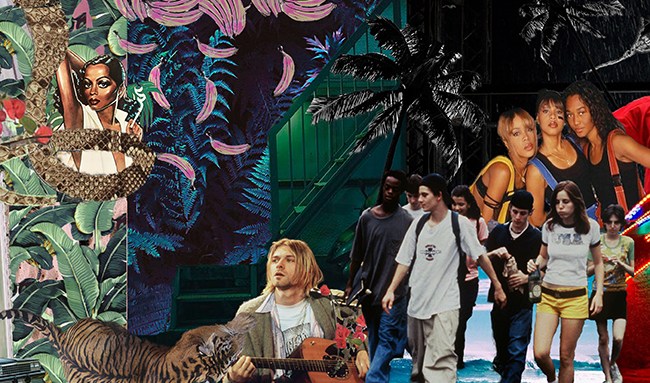 “Rock in the shoe” — A Détacher

“Sun’s out, buns out” — Alexander Wang

“Did I ever tell ya that this here jacket represents a symbol of my individuality, and my belief in personal freedom?” — Sailor Ripley, Wild at Heart, 1990. — Altuzarra

“Dada is not art, it is antiart.” — Andrea Jiapei Li

“My spring collection is perfect for a getaway on the Isle of Capri. Vintage photos from the Sixties and Seventies inspired a cool, modern seaside collection fit for a world-traveled woman.”
— Christian Siriano

“The collection is all about juxtaposition, highlighting the contradiction of Victorian romanticism with military structure and masculinity, as well as the idea of abbreviated versus oversized.” — Caroline Belhumeur, Club Monaco

“Spring looks at kinetic sculpture, the movement of air and light and textiles effected by movement.” — Dion Lee

“For spring, Erin Fetherston celebrates 10 years of showing in NYFW with a celestial-inspired collection for the timeless romantic. Weaving together a sultry, moonlit tale, Fetherston works with ethereal fabrics like billowy gauze and metallic chiffons paired with buttery silks and crepe adorned with earthy embellishments like raw quartz crystal.” — Erin Fetherston

“For spring, the collection is pure with crisp whites and clean lines. Inspired by the formality of uniforms and the charm they evoke, Ji explores different ways to extend shirting — more playful and clever, accented with grommets and thoughtfully placed silver brooches in the shape of pyramids and cubes, to connect mandarin collars or link cuffs together.” — Ji Oh

“Transitional states of being.” — Jill Stuart

“And now that you don’t have to be perfect, you can be good.” — John Steinbeck. — Kimora Lee Simmons

“Spring was influenced by the classic silhouettes of iconic New York nightlife of the Seventies and Eighties.” — Michelle Aznavorian, Misha Collection

“The collection is inspired by my time at Halston in the Seventies, with bold hues and vibrant florals.” — Naeem Khan

“Culture shock and a play on tradition.” — Nicole Miller

“I have continued my exploration of art and geometry, and the contrast of boldness and softness.” — Jordana Warmflash, Novis

“The World According to Heavenly Creatures” — Scotch & Soda

If you wish to understand the Universe, think of energy, frequency and vibration. —  Threeasfour

“The inspiration for this collection was a satellite photo of the ‘Tribute in Light,’ which is the annual display of two beams of light illuminating the Manhattan skyline in remembrance of the September 11th attacks. The collection’s theme conveys the brand’s respect toward the heroes of the city and expresses a positive outlook for the city’s future. The color palette is greatly influenced by the color tone of the satellite photo, and the silhouette is evolved from the geometric structure of the buildings.” — Vivienne Hu

“Stranded was a nightclub in Sydney in the Eighties. For me, it represented an escape from a sheltered suburb childhood, a place where creative people came together to express themselves. We were a bit isolated from fashion and music and the Eighties subcultures that were emerging elsewhere. So people interpreted them in their own way. We were bowerbirds — we couldn’t find the clothes that others could buy so we made things. We ripped up tutus, we stole dad’s shirts, we found old pieces of lace — we tied, we tattered, tangled and frayed. I have been influenced as much by the ideas behind what we wore as the feeling of time in my life and what it represented.” — Zimmermann