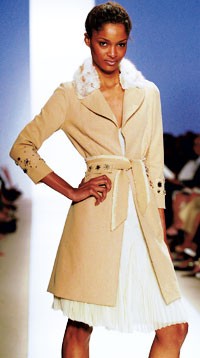 J.Mendel: Gilles Mendel’s first full-scale show for J.Mendel was plenty polished. While he’s well known for his luxurious and inventive furs, the designer has been adding more ready-to-wear each season. In the past, the clothes seemed to be more of an afterthought, but this time, Mendel put together a cohesive collection that integrated fur and fabric wonderfully, styled in fresh proportions full of charming details. The designer, for example, did a crystal-detailed canvas coat with a marshmallow Barguzine sable collar and a trimmed pink goat jacket in sequins. These lively mixes had a slightly funky, downtown edge. Mendel’s relaxed mood was mirrored, too, in his play of dressy with sporty pieces. He took printed silk chiffon and shaped it into a snug little jacket that reversed to mink and was shown with mocha canvas pants. And the long and short, creamy printed silk chiffon dresses just floated down the runway, reflecting Mendel’s new confidence with rtw. While this town is already flooded with chiffon dresses, that fact didn’t take away from the designer’s youngest and strongest collection to date.

Catherine Malandrino: Inspired by Blake Edwards’ 1968 film, “The Party,” Catherine Malandrino threw a fete of her own at her new flagship on Hudson Street. Her models lounged around casually, looking glamorous and sipping champagne while wearing her fabulous frocks for spring. Guests were pleasantly surprised to find that the designer broke with the dark, bizarre looks of the past few seasons and replaced them with what she’s better known for: pieces that are beautiful, confident and ultrafeminine. “The only problem with this collection,” one onlooker noted, “is that you can’t go to the store and buy it all tomorrow.” Indeed, the 34 numbers Malandrino showed included some of her best ever. She explored her soft, romantic side, as in her exquisite long, tiered white halter gown in embroidered cotton voile, and the green crinkle chiffon blousy halter dress. Many of the looks were sweet, but she rounded them out with chic tailoring and intricate details such as in her jackets with rich metallic embroideries and blouses with fine lace accents. And for a touch of the exotic, she included gold-dotted dresses with jacquard borders and long, ivory and gold caftan-like dresses.

Menichetti: Roberto Menichetti has always favored a clean, sporty outlook with an almost mathematical execution. Just look back to his Jil Sander or Burberry design gigs for proof of that. With his second collection, and first on the runway, Menichetti tempered that precision with a looser, feminine charm. There were plenty of chic little tunics, either solid black or white, some color-blocked with bright green and orange, held loosely together with a thin silver chain. A gray jersey dress fell open in front to reveal several gently folding layers, while horizontally striped tanks topped cute cotton and perforated leather shorts. Menichetti’s muse will be stepping out for evening in straightforward jewel-toned satin slipdresses, sticking to his minimal aesthetic. Even his take on the poet shirt was stripped down, with tiny gathers and subtle, cuff-link closures. The collection had a couture feeling with superluxe fabrics, yet was still simple and elegant.

Luca Luca: Talk about a 180. After last season’s sexpot extravaganza, Luca Orlandi decided his ladies should be sweet — if not still a wee bit sexy — for spring. Take his front row, for example, where just those sorts of pretty young girls, namely Jessica Simpson and Mischa Barton, sat. They may be a bit young to appreciate the sophistication of the short-sleeved linen jackets worn with full-leg trousers, but those are exactly the looks that should reinterest the uptown clientele Orlandi turned off with the klieglike glitz of past collections. He favored short sleeves, often trimming them in satin for jackets and embroidered cotton blouses. The series of cotton piqué sundresses looked pretty, if not necessarily original. While many expected that the condom box invitation would make sense in the grand scheme of the evening, it didn’t. Orlandi instead forged on with a gentler Fifties sex appeal, one that fashioned lots of silk organza and paneled linen into the sort of red-carpet frocks a good girl might covet.

Roland Mouret: It’s a favorite fashion aphorism: “Two times is a coincidence, three times a trend.” Well, the proof is in the pudding for Roland Mouret. Mouret, a former French model-cum-London-based designer showed another strong collection, his third consecutive winner here. Mouret has a great way of doing sexy draped and knotted jersey dresses and a crisp yet gentle sort of origami-type tailoring. For spring, he combined those two strengths to dazzling effect.

In a season that has already shown that ladylike looks are here to stay, Mouret’s modern ode to “Belle du Jour” was fresh. Silver brocade was neatly cut into jackets, skirts and a slim shirtdress, while sharp, pencil-skirted suits in salt-and-pepper tweed were softened by langui, mint or pink jersey tops, some sprouting streamers. A glossy gold silk suit with a stand-up boatneck collar was perfect for any current Jackie, while a crepe chiffon tucked twinset was sweet Marilyn all the way. Mouret’s evening lineup was done up in a girlish array of raspberry, nude or turquoise chiffon meticulously draped over champagne silk, and the top looks included a strapless, slightly pouf-hemmed cocktail dress, a floor-length siren gown and organza numbers with fishtails. The verdict: utterly chic and light as a feather.

VPL: Just when you thought Victoria Bartlett couldn’t get any more imaginative, she amazes her fans with another season of great pieces. Working in a perfect palette of pale gray, faded teal and nude, with accents of acid yellow and white, she showed tanks, shorts, T-shirts, miniskirts, bodysuits and all manner of underwear that moved with great humor, flair and energy.

These clothes defy categorizing. They come close to being lingerie, but then they also could be daring sportswear, funky active looks or maybe something brand-new. But no matter the category, they were all terribly clever, and so was the designer’s choice of venue. She held her show at The Gym, where models pretended to work out, some wearing what the designer called “beads-of-sweat” necklaces, which were terrific, large plastic creations from Josh Hickey. Bartlett’s adroit humor was also evident in her layered cotton voile tanks, vein-printed boy-cut shorts, the blue cotton Lycra T-shirt and underwear skirts. And, just in case you were waiting for someone to finally invent that sweat-proof, cellophane capelet, Bartlett delivered it. Another curiosity: most of the looks had halter-strapped football shoulder pads. Who knows why, but it still looked fabulous.