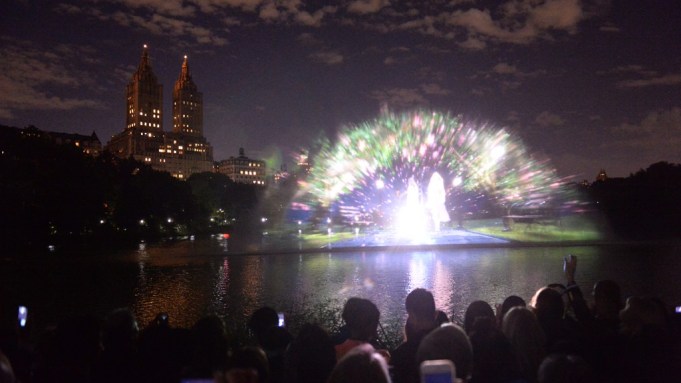 Ralph Lauren made a major push for Polo’s women’s line Monday night by showing the spring collection on water, literally.

Extending his ownership of 72nd Street to Central Park West, Lauren took over the lake at Cherry Hill to stage a very, very pricey four-dimensional cinematic event. Part water show, part video, it featured models walking through digitally re-created sections of New York, the latter projected against a screen of water shooting up into the air, and ended with the moon rising to Frank Sinatra’s “Fly Me to the Moon.” It was quite a spectacle, enjoyed by a crowd that included Ben Stiller, Diane von Furstenberg and Barry Diller, Karolina Kurkova, Ivanka Trump, Karlie Kloss, Kendall Jenner and the entire Lauren clan.

As for the lineup, it was casual and sporty, with clothes that nodded at Lauren’s Americana heritage through a downtown lens. It included flirty white dresses, a yellow top-and-pants combination teamed with a plaid shirt, and a parade of finale dresses in all colors of the rainbow.

For the finale, the man himself, or more precisely, his hydro-holographic image, rose above all and did a little Astaire move, while skimming atop the water.