Designers cut, appliquéd and printed fabrics to create intricate motifs that seemed to come alive as they reacted to light and the movement of the body.

Designers cut, appliquéd and printed fabrics to create intricate motifs that seemed to come alive as they reacted to light and the movement of the body. 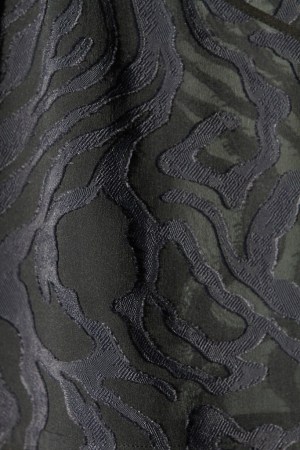 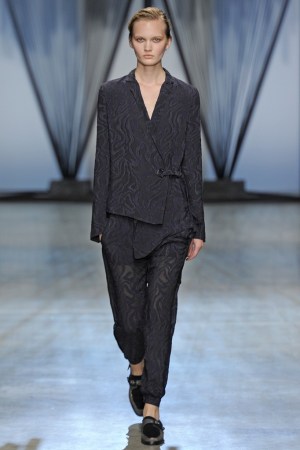 Prabal Gurung showed a cloque mountain jacquard typically used in haute couture, and developed it with a photographic pattern.

This story first appeared in the November 17, 2014 issue of WWD. Subscribe Today.

“We worked with Gentili Mosconi, which works at the highest level with couture fabrics, on the development,” Gurung said. “It was based on a similar cloque motif we’ve done in the past with rose elements.”

The material’s base was a gauzy organza; the shimmering pattern was the result of silk and Lurex fibers. The designer used the fabric for a racer-front blouse and handkerchief skirt and a sporty jacket—think couture element meets American sportswear, and you get the picture.

“What appealed to us,” he noted, “was the lightness of the fabric mixed with the textural possibilities and how we were able to use such intricate motifs that were almost photographic.”

Damir Doma developed a jacquard weave with floating yarns, also known as fil coupé. The threads are cut to create a pattern. The designer did two versions of this: one in heavy crepe silk with cotton inserts, and a second one in fluid silk chiffon with acetate inserts.

“I think luxury comes through texture, and texture is usually absent from summer collections,” said Doma. “The challenge here was to create a 3-D feel while keeping the fabric light and wearable enough for the woman.” It took quite a bit of trying before the right formula was found, he acknowledged, and since the fabric is quite compact and not suitable for draping, it was used for the tailored pieces in the collection, including a wrap coat and a sporty-chic pants-tank top combo. “What’s interesting about fil coupé,” added Doma, “is that it doesn’t have a left or right side, which creates a beautiful duality.”

Doma noted that fabric innovation is a useful tool for independent brands looking to distinguish themselves from their conglomerate competitors. “We have the luck and the power to be able to use innovation in ways that big brands don’t. We are more flexible. I think customers expect that from us and are also willing to take risks with us.”

“I opened the fibers with laser cuts on the surface to make it look fragile and to give more lightness to the fabric, which becomes almost netted,” he explained. “Materials transform and, as they open up, they follow and reveal the body’s movements. The concept is to pull apart different levels of materials creating a continuous movement.”

Over the past few seasons, Mary Katrantzou has been moving away from the digital prints for which she’s known, instead creating looks with rich, vivid detail using texture and embroidery.

For spring—a collection inspired by the geological origin of the continents—she crafted motifs of dancing primordial birds and reptiles from Swiss guipure lace, with panels of the fabric worked onto starched cotton shirtdresses.

“I wanted to keep the authentic structure and fabric of the classic shirt, intersecting it with lace appliqué,” said Katrantzou. “Each creature was hand-appliquéd onto the sheerest of tulle underlays to create a second skin, almost invisible to the eye. The lace is so delicate and it [translated] beautifully on to the catwalk.” For Katrantzou, the design juxtaposed “the fantasy of the dancing creatures against the reality of the simple cotton shirt.”