Despite the lack of a unified direction at the Paris collections, some buyers said they would increase their spending by as much as 15 percent. 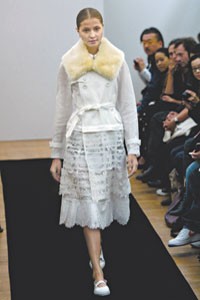 Despite the lack of a compelling, unifying direction as the French capital wound up an international marathon of shows, some buyers said they would likely increase their spend on collections here by as much as 15 percent.

Balenciaga was the most-praised label, with retailer Linda Dresner crowning it “the richest collection in Paris.”

Joan Kaner, senior vice president and fashion director at Neiman Marcus, said fashion seems to be at a crossroads and confused as to which way to turn.

But there were recurring trends. The dress, a key element in Milan, was just as important in Paris, along with the pantsuit. Cropped jackets, trenchcoats, Bermuda shorts, embroidered blouses, platform shoes and wide belts were other styles frequently mentioned as key items.

“There is room for more creativity and innovation,” he said. “This season will require more merchant skills to give the homogeneity of the runway a new spin.”