NEW YORK — Sock makers have found a simple solution for those who won’t have time to escape to a Caribbean island anytime soon — just buy a lot of socks come spring.

Vendors are tapping into looks that bring a bit of the... 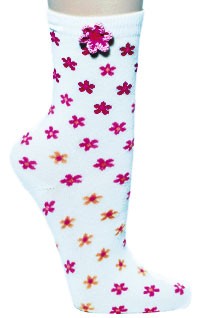 NEW YORK — Sock makers have found a simple solution for those who won’t have time to escape to a Caribbean island anytime soon — just buy a lot of socks come spring.

Vendors are tapping into looks that bring a bit of the islands home in their spring assortments, which will be presented during next week’s legwear market. Whether it’s bright colors or preppy palm tree prints, sock trends for spring are about fun designs and making the customer feel good.

“It’s all about color,” said Susan Spindell, national sales manager at Hot Sox. “Color is driving everything right now, it doesn’t matter what industry, market or what store. We are coming off of an unbelievably colored fall, where everything with great color booked the most. That’s where we got our response and we didn’t want to drop the ball for spring because we could see what the customer wanted.”

Another brand using a bright, citrus color palette is Calvin Klein. But equally as important, said Jordan Lipson, president of American Essentials, which licenses the Klein sock collection, is shape.

“What we’ve been seeing is a very bare-legged world, and the last few spring seasons have been challenging,’’ Lipson said. “This year, we’re using sheer, fine and microfiber materials, and interpreting them into sock silhouettes.”

After all, light weights and short lengths, such as an anklet or no-show sock, will bring the customer as close to bare-legged as she can get in a sock.

“Everybody’s looking for something new because this spring has been a bit tough,” she said. “The silhouette is short, ranging from a no-show to a sporty shortie and a loafer sock.”

Reese said in accordance with sportswear trends, embellishment is increasingly important for socks, with beads, bows, and embroidery. Soxland is offering socks adorned with satin and velvet rosettes, daisies and ribbons, as well as hand-crocheted strawberries and bumblebees that dangle off the sock.

“It’s making the sock for spring as special as possible,” she said. “The glitz is back. I saw this couple early one morning at Au Bon Pain and they were so decked out with diamonds for breakfast. I thought, hey, that look works. People like to wear things that are opulent again.”

While it may prove difficult to bring that level of luxury to a sock — fine fibers such as cashmere are reserved for the colder fall season — vendors are taking their best shot at providing something special. A single rose runs down the side of an anklet from Betsey Johnson’s new collection, “giving it a real tattoo kind of look,” said Fern Pochtar, vice president and design director for Solo Licensing Corp., which licenses the line. Florals and rose prints are prominent in the spring offerings. Net socks with stretch trim that wraps around the leg and snaps in the back will be another unique look, Pochtar said.

Many vendors are relying on novelty prints to attract customers. This spring market, E & E Hosiery will present a variety of open weaves, including small and large fishnets, tropical-inspired looks with palm trees and novelty looks with motifs such as martini glasses, handbag-carrying girls and girls on a beach.

“Everything is bright,” said Elie Levy, president of E & E Hosiery. “I think spring will be outstanding. Going into last spring, people were more cautious, but now buyers are anticipating consumers will be in stores more. We are seeing buyers anticipate 10 to 15 percent increases, which is a lot for socks.”

Among the key spring directions at Ozone Design will be island-inspired patterns and flowers that are full and entangled; fruit motifs such as berries, kiwis and apples, and Sixties-inspired prints and solids in bright colors, including fuchsia, green and orange.

Many vendors are mimicking the preppy trend in belts and apparel and using small embroidered animal patterns on socks. Legale will offer socks in bright and pastel colors with small emblems at the trim. Snails, turtles, lobsters and crabs are among the selection.

“It’s that country club look along the lines of Lilly Pulitzer,” said Jerry Perry, vice president and designer at Legale. “Our embroidered group will be one of our most important groups.”

At Gina Hosiery, motifs such as tennis rackets and palm trees will be important, as well as nautical prints and designs that evoke particular travel destinations. But the group that received the strongest reaction from buyers who have seen previews is the floral feminine story, said Raymond Dayan, vice president of Gina Hosiery. Details such as lace, delicate fishnet weaves, and subdued patterns figure prominently and the color palette is mostly pastels. “There’s a lot of the pretty look going on in spring,” Dayan said. “The upscale look that’s happening in fall with laces and pin dots, it’s natural that it’ll continue.”

Feminine, romantic looks with soft colors, floral motifs, open work and special treatments also will be a focus at Handcraft.

“A little more treatment will make it more feminine and special, like crocheted flowers or intimate-type elastics on a foot cover or lacing that might be put through the makeup of the sock and then turned into a bow,” said Deborah Boria, executive vice president of design and merchandising at Handcraft. “We also see a strong nautical story that is very jeans friendly, with white, denim, chambray. It plays off the mood in ready-to-wear.”

Nautical themes are no strangers to spring and summer collections, but because of the common red, white and blue color story, they happen to be particularly relevant for this election year. In addition to sailboat and anchor patterns, K. Bell will incorporate patriotic looks, such as flags and the Statue of Liberty.

“Following an election year, we’ve always had success with any spring group that has to do so with Americana,” said Karen Bell, chairman. “Also, Memorial Day and the Fourth of July fall into that season.”