People attend parties for various reasons — obligation, interest, an opportunity to be photographed and free booze chief among them. 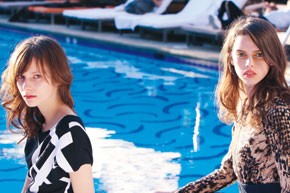 People attend parties for various reasons — obligation, interest, an opportunity to be photographed and free booze chief among them. On Thursday, Lauren duPont did so out of affection for her artist husband Richard, whose “Terminal Stage” project opened at Lever House. The blonde social wasn’t shaken by the concept of partygoers gazing upon Richard’s trippy self-portrait sculptures, which depict him in all his naked glory. “I don’t think of them as him anymore,” she said. “I think of them as objects.”

DuPont’s friends, including Aby Rosen, Larry Gagosian, Aerin Lauder and Bob Colacello arrived for dinner out of loyalty to the couple, one presumes, while a younger crowd invaded the Young Fellows of the Frick Collection ball for a little elbow-rubbing and an excuse to wear a feathered mask. Guests such as Lauren Remington Platt, Poppy Delevingne and Alexia Kondylis took the evening’s Un Ballo in Maschera theme to extraordinary heights (in the case of one reveler, a full-plumed affair worthy of a Mardi Gras parade float).

“I feel so weak with my Batman mask,” said Marina Rust Connor, dressed in a design by the night’s sponsor, Elie Saab, as she admired a gold floral creation on one girl. But it wasn’t getting much play time anyway. “I have to leave soon and go cook dinner for my husband. He’s watching ‘Celebrity Apprentice,'” she continued (he missed his celebrity moment at the ball — the show’s star, Ivanka Trump, was making the rounds in a diaphanous white gown).

After a few twirls on the dance floor, the chairs and their friends headed over to a model apartment at 807 Park Avenue for a midnight breakfast, noshing on scrambled eggs, mini bagels and Moët & Chandon.

The previous night, style-obsessed teens got their fashion fix at the fete Teen Vogue and Burberry hosted for the launch of the label’s perfume, “The Beat,” at its SoHo outpost. The crowd was carded at the door and given patent leather Burberry wristbands to denote drinking age status. Daisy Lowe (daughter of Gavin Rossdale), Ellie Monahan (Katie Couric’s kid), Emily McEnroe (spawn of John McEnroe and Tatum O’Neal) and Emma Roberts (niece of Julia) joined a 36-year-old Christopher Bailey, who for his part seemed to be holding his own amid the young crowd. “I don’t think of myself as that old, honestly,” the designer said.

Uptown, more grown-up socials flooded the Museum of the City of New York’s Winter Ball, this time sponsored by Dior, which got its strongest turnout in years. Why? “I have one word for you: Loyalty!” declared Muffie Potter Aston. “I come every year because of my friends [chairs] Mark Gilbertson and Cynthia Lufkin.”

Much later that evening, night crawlers crammed into new club 1OAK to help co-owner Jeffrey Jah celebrate his 39th birthday to the tune of a pounding bass line. Exes Kate Hudson and Chris Robinson, friends of co-owner Richie Akiva (Scott Sartiano is the third partner), held court in a banquette near the back.

On Wednesday night, Ralph Lauren held a spring show at his store in Palm Beach to benefit the Glades Academy, while Alexandra von Furstenberg presented her first (limited edition Plexiglas) furniture collection at the Ace Gallery in Beverly Hills. Fans like her mom Chantal Miller, Ryan Haddon, Crystal Lourd and Brooke Davenport came out to cheer her on (sister Pia Getty was stuck in Peru).

A few miles up the hill in Benedict Canyon, Brett Ratner hosted another one of his rowdy fetes, this time to celebrate Chris Benz’s launch at Neiman Marcus. Lindsay Lohan took shelter inside Ratner’s manse while Rebecca Gayheart, Ileana Douglas and Jenna Elfman mingled outside. While Ratner wouldn’t seem like a fan of fluid frocks in punchy colors, he’s actually a family friend of Benz’s business partner. “Brett kept telling me his place is great for parties,” said Benz, who was surrounded by his parents, pals and “a lot of people I don’t know.”

BURBERRY PARTY PHOTOS BY SCOTT RUDD; VON FURSTENBERG BY AMY GRAVES; BENZ BY DONATO SARDELLA; ALL OTHERS BY STEVE EICHNER