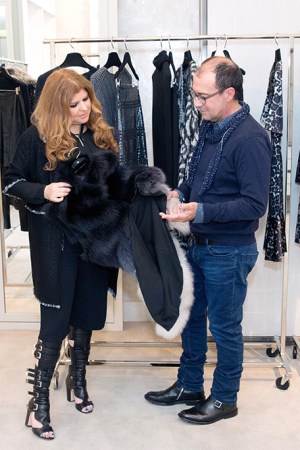 Bernd Beetz, interim chief executive officer of St. John Knits Inc., has a big voice, calling in from his summer vacation on a boat somewhere in Greece earlier this month. The subject: the grand business plans set in motion nearly a year ago to reposition the house of St. John.

“This is a tremendous brand, a lot of craftsmanship,” he said. “It’s born in California. All this positioning to me was really important to get through [to customers]. The company has done too little in the past to bring that story forward.” The strategy: Elevate the collection, make it more modern and get back to the company’s roots as a designer knitwear maker founded in 1962 by Bob and Marie Gray. The Grays are now the stuff of fashion legend, having launched the label on a whim from their San Fernando Valley garage and eventually building a cultlike following, complete with campy ads that featured their daughter and former creative director Kelly typically surrounded by hunky men in supplication.

Beetz took on the top spot late last year following a series of management changes. He filled the position after the departure — for which no reason was offered — of Geoffroy van Raemdonck, whom he hired as ceo in July 2013 following the resignation of Glenn McMahon. McMahon departed after six years at the company to move back to New York, where he was later hired as ceo of Tamara Mellon and was more recently tappped to join Escada as ceo. St. John confirmed an executive search for a permanent ceo is not currently under way.

Beetz wasted no time filling out the management team since assuming the leadership position. In February, 15-year St. John veteran Bruce Fetter rejoined as president and chief operating officer. The company also added to its design team — led by Greg Myler, senior vice president of design — with the hiring of vice president of design Tamar Magnes in March and expanded the role of Aja Passero, who is now chief merchant.

The fall collection was inspired by not one but several locales, each in St. John’s own backyard. Punches of blue came from Lake Tahoe. Jewel tones were sourced from Napa Valley. All of it was mixed with the chic, old-money vibe of Carmel in looks that ranged from leather leggings paired with sweaters to a jacquard coat knit from Italian velvet yarn. There was also a liberal dose of eveningwear.

“We’re not dressing fashionistas,” Myler said. “[These women] just want beautiful, elegant clothes that they can wear and that speak to their lifestyle.”

Jennifer Wheeler, vice president of women’s designer apparel at Nordstrom Inc., is seeing new momentum for the brand. “From a product perspective, the collection is moving in a positive direction and the customer is responding,” she said. “We saw the spring collection perform better than spring of last year, fall is off to a strong start and we feel good about how the resort 2016 collection looked.”

Spring 2016, according to Myler, will take its cues from three European islands. He would only say that the color palettes are “vibrant, exciting and maybe even a little surprising. We’re playing with prints and textures and making a big statement with our jewelry.”

But to really understand the St. John strategy is to know the backstory of the finished garments. And to do that, one must set one’s GPS to 17622 Armstrong Avenue in Irvine, Calif., and drive about 40 miles south of downtown L.A., where nondescript industrial parks abound. It’s there that St. John keeps its headquarters along with its dye house, patternmakers, sewers, knitting machines and distribution center housed among six buildings.

Fetter weaved in and out of the complex with ease during a recent facility tour, stopping first at the block-long building where wool is twisted with rayon to produce the company’s yarn. It’s a 24-hours-a-day, five-days-a-week operation in the same facility that had at one time housed the entire company. Next, he bobbed into the 110,000-square-foot building with the design team and the roughly dozen programmers who create the stitches for the knitting machines. There’s also an area where workers set stones and affix other embellishments to garments by hand.

To get across the message of its manufacturing process, St. John is ramping up its training for store employees, which now includes a factory tour. “We didn’t value [that story] as much for a period in our recent history here, but we’re doing more of it now,” Fetter said.

Whether that story sticks with a new generation, only time will tell. While St. John has a history of being the label of choice among businesswomen and politicians, it has been trying to woo a younger clientele. A decade ago, it hired Angelina Jolie to be the face of the brand and lost its way by altering the classic fit of its ready-to-wear. Customers — retailers and consumers alike — deserted in droves. Later the company tapped Kate Winslet and then Karen Elson. The new campaign skips the camp and celebs of prior years and opts for models in various California-inspired tableaux.

“From a younger person’s standpoint, I think they appreciate [that craftsmanship story] as much as anybody,” Fetter said. “The question really is, as a younger person, can you afford that or not? And some can and we love those people that can.”

To test the waters, the company sponsored Elle magazine’s Women in Tech dinner in June, a move executives described as having placed the brand in front of a group of younger, affluent prospective customers. New ads for fall broke today in Elle, representing the first time in several years that the brand has advertised in a national publication.

So what makes St. John executives think that this time around the plan will stick?

“That’s a very good question,” Beetz said. “I think we are sure about it because we are working with the right partners, but also we can monitor much better now because of technology advances.” For example, the company implemented customer relationship management software 18 months ago to more closely monitor how customers are responding to product and sell-through.

Sales at St. John boutiques — of which there are 35, with 22 of those in the U.S. — are increasing, Beetz said. The ceo declined to comment on a report that put annual revenue at around $325 million in 2013, down from estimates that pegged that company’s sales as high as $400 million in the early part of the decade. He noted that sales are expected to grow this year and St. John is likely to see a profit.

There was buzz a few years ago about a possible sale, but Beetz shot down talk that anything of that sort was currently being considered. “Look, Vestar [Capital Partners] sold that position to us and we are very happy with the investment,” he said.

Back in 2013, Beetz, a veteran of the beauty industry who split from Coty Inc., and China-based Fosun International acquired a minority stake in the company from Vestar, which remains a majority owner, and that move is now helping fuel strategy in China. St. John is in the process of taking back its business from a licensee there to establish the wholly owned subsidiary St. John China. It will have an executive team of eight that will balloon to around 80 with the inclusion of store employees.

The company’s dozen stores in China will be narrowed to seven and then the inventory will be built back up from there, according to Fetter. The first of those new stores, a flagship in Shanghai, will open in November. Seven new stores are planned for next year.

Domestically, the company is looking at the Bay Area and Washington, D.C., though the growth plan is less specific compared to China.

There’s also e-commerce set to roll out — some might say, finally — in October.

It’s a big move for a company that has been relatively quiet the past few years. “Sometimes we took a low profile,” Fetter admitted. “We’re ready to tell our story. We’ve always been proud of it, but now is the right time for us.”