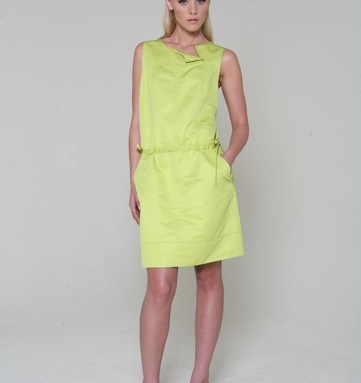 IRVINE, Calif. — St. John is breaking the mold, launching a better contemporary line for resort called SoCa that is aimed at a younger customer and will operate separately from the brand’s signature label.

SoCa, a complete casual lifestyle collection targeting 35- to 55-year-olds, will be sold starting in November in freestanding company-owned stores dedicated exclusively to it at South Coast Plaza in Costa Mesa, Calif., and in Palm Desert, Calif.

The line also will be available in 125 stores and displayed alongside brands such as Tory Burch and M Missoni in Saks Fifth Avenue, Neiman Marcus, Nordstrom and Bloomingdale’s. Retail prices range from $195 to $295 for tops and pants, and $395 to $695 for jackets and dresses.

The launch may be the boldest move yet made by Glenn McMahon since he was named chief executive officer in September 2007 after the departure of Richard Cohen, who stumbled when his strategy to lure younger customers with a new fit met resistance from loyal and mature clientele.

“SoCa is based on the Southern California lifestyle, but with a sophisticated urban edge,” McMahon said.

“It’s an opportunity to address a completely different contemporary customer that we would never have been able to reach with the collection line,” the ceo said, adding that he saw minimal crossover between the two customer bases.

However, Nordstrom plans to merchandise SoCa next to St. John’s shop-in-shops because it sees some crossover.

“The collection has a much younger, more contemporary attitude than the main St. John collection with the great fit of St. John, which is what we think gives it the broad crossover appeal,” said Jennifer Wheeler, vice president of women’s designer apparel for Nordstrom.

“We saw an opportunity in the marketplace with the bridge category falling down, so to speak, and that our retail partners had a big open-to-buy in the space right under designer,” McMahon explained. “A downturn in the economy is sometimes the best time to launch new ideas because stores are looking for newness.” (For more on St. John, see page 25.)

Frank Doroff, vice chairman of Bloomingdale’s, hopes SoCa will invigorate the stagnant bridge category. “That zone of business has been difficult and having newness from a great name will spur business,” he said.

SoCa will go into 12 Bloomingdale’s stores, which is high for a new line, Doroff said.

“I basically gave Greg carte blanche and said, ‘Design what you think this contemporary woman is looking for,’” McMahon said. “Something casual, but not too beachy that would appeal to women in New York as well as Shanghai.”

Like its parent line, all fabrics are developed in-house. And there are elements of St. John’s DNA throughout the SoCa line.

The bright colors, innovative patterned knits and packable fabrics like silk jersey and Ponti di Roma harken back to St. John’s signature Santana knit. One watercolor printed cotton cardigan is lined with a matching printed chiffon, and there’s a ruched chiffon cropped jacket that reverses to a flat texture.

The line has its own saffron label, which sports the SoCa logo with the St. John logo below in a smaller font. In addition, the two retail stores have their own Hollywood Regency aesthetic, with white powder-coat painted metal fixtures suspended from the ceiling, glossy black coffee tables and saffron couches.

McMahon said he has plans to build SoCa into a full lifestyle brand with fragrance and nonapparel categories launching within 12 months.

“This has the potential to be a $150 million to $200 million brand over the next five years,” he said, pointing out that Tory Burch reached that milestone in a similar time frame.

SoCa will also have its own Web site, designed by createthe group, though marketing will be less traditional than print ad campaigns. There have already been fashion shows at Neiman Marcus in Dallas, and a charity fashion show for Music for the Cure is planned for Nov. 14 in Laguna Beach, Calif.