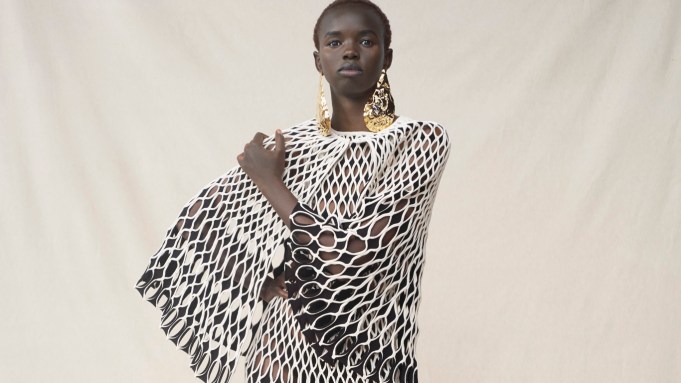 The 16 head-to-toe looks, priced from $800 for a sheer, silk knit bodysuit to $6,800 for a graphic-looking, textural open-knit dress, will debut at a press event in New York City Wednesday and be available to shop the next day online, and via Instagram and WeChat in China.

It’s the first collection from the brand’s new creative director Zoe Turner, a British-born knitwear designer who worked at Max Mara, Alberta Ferretti and Dior under John Galliano and Raf Simons, and consulted for St. John for eight months before being hired for the top job in October.

“I’ve come from a luxury knitwear background, and St. John is a luxury American knitwear brand, so for me, to work on such a  project is really exciting,” said Turner, who is so new to the company she’s still living in hotels and commuting back and forth from Europe. “When I found out about this job and went to Irvine, it was magical because of all the facilities,” she said, referencing the brand’s factory and 300-some knitting machines located in an industrial park in Orange County. (Manufacturing is split between the U.S., a plant in Tijuana, Mexico, and Chinese factories.)

St. John was founded in 1962 by Bob and Marie Gray, quickly earning a reputation for softly tailored knit suits and conservative evening dresses that appealed to a mostly over-40 fanbase including Condoleezza Rice, Hillary Clinton, Gloria Allred and others. Perennially pegged as being in need of a facelift, the brand has for the past two decades been trying to capture a younger customer, with a revolving door of past chief executive officers recruiting Angelina Jolie, Kate Winslet and Gisele Bündchen as models, and designers who never managed to make much noise.

Turner brings a more directional, European point of view to the California brand, as evidenced in the capsule, which plays with the oversized tailoring, sheer and extreme knit trends seen on recent runways.

“I wanted to use the capsule as a platform to go forward, it’s a starting point for me to look at the archives, the history of the brand, identify the codes of St. John that have been slightly forgotten about because they haven’t had a creative director for a while,” Turner said of the pieces, which include a graphic black, Ottoman-knit, long-sleeve v-neck dress with windowpane cutouts at the hem, after a similar style designed by Marie Gray in the Sixties; the brand’s famed soft tweed reworked into a cream-and-silver knit bomber jacket and trackpants for today’s ath-leisure-loving customer, and an oversize, tailored check double-breasted pantsuit made trend-relevant with a sexy, ivory knit sleeveless bodysuit with gold-chain detail down the front.

Tailoring and suiting will continue to be a key part of the collections going forward, Turner said. “The brand was started by a strong and independent, forward-thinking woman who wanted her ideas to be heard on how women should dress. Since then, the brand has had a history of dressing women of influence.”

St. John, which has struggled through layoffs in recent years, currently employs just over 1,000 people, sells its collection through 50 company-owned boutiques in 25 countries, on its web site, and in 200 department store doors such as Nordstrom, Neiman Marcus and Saks Fifth Avenue.

This is the first time the brand has used the drop method and released a collection digitally. “It creates excitement and anticipation, and that makes it special,” said Turner, not ruling out a future showing for St. John on the runway, even at New York Fashion Week, perhaps. St. John has also enlisted 100, yes 100, influencers to help spread the word about the launch, which includes a new spin on the logo. Those enlisted include inclusivity fashion advocate Lauren “Lolo” Spencer, red carpet stylist Micaela Erlanger and transgender model Leyna Bloom.

“This is completely new for us, and is one of those steps forward into modernizing who we are and how we speak to women today,” said ceo Eran Cohen, who joined the brand a year ago with experience from Esprit, Gap and Diane von Furstenberg. “We have a very powerful group of core women who have been following us for years, I believe aspects of this will resonate with them, and who they think the brand is, and how it relates to our DNA,” he said of the capsule collection. “I also think it’s a more modern approach to our brand, and it opens us up to talk to today’s woman as well.”

“Zoe has a fresh outlook,” Joann Cheng, chairman of Fosun Fashion Group, which acquired a majority interest in St. John in 2017, told WWD in October. “She is curious, creative and passionate, and this energy will help drive St. John to the next level. She has a deep understanding of the brand’s DNA and how to communicate that to customers through a 360-degree brand experience. We believe Zoe can introduce St. John to a larger audience through reinterpreting the brand codes and modernizing the collections.”

Turner turned the capsule collection around very quickly, in part with an eye toward awards season. “I have the intention to dress celebrities,” she said. “Coming from Dior, it’s my passion and part of me to create beautiful dresses. We’re working on a project for that right now.”