Las Vegas trade expos look to separate themselves from the pack. 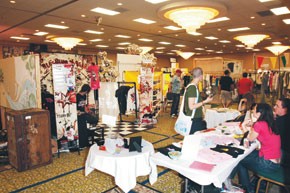 Taking a page from the playbook of the constantly renovating casinos on the Las Vegas Strip, the February lineup of trade expos in Sin City will shuffle some locations and kick off new strategies to stand out from a crowded roster and meet the changing needs of attendees.

One of the biggest moves is Pool’s decision to locate its 300 exhibitors from the Gold Lot located outside of the Las Vegas Convention Center to within the building’s Central Hall. Previously home to the men’s casual and contemporary sections of MAGIC, the Central Hall boasts its own entrance. In addition, with a direct shuttle to Project as well as a stop on the buses circling the LVCC, Pool insisted that the new location doesn’t signal that it’s being absorbed by the MAGIC Marketplace, whose parent company, Advanstar Communications, is also the owner of Pool and Project. Instead, the change of venue is intended to help its retail buyers to better navigate the six-day series of more than a dozen trade events starting on Feb. 11.

“We were hearing from a lot of buyers that there were too many shows in too short of time to cover everything,” said Stephanie Seeley, manager for Pool. “It’s important for us to maintain our own identity.”

Seeley said the new location will help Pool, which runs from Feb. 12 to 14, to continue to increase the number of retailers interested in snapping up women’s young contemporary and contemporary fashion, men’s looks, accessories and streetwear. Retail buyers at past shows represented national chains including Urban Outfitters, Hot Topic and Metropark, as well as single-door specialty shops.

In August, Pool posted a 93 percent increase in retailer attendance from last year, when the show was held at Mandalay Bay Hotel & Casino. The most recent run also reflected a 37 percent increase from February, or the first time that Pool was held in the Gold Lot.

Another way for Pool to hold its own is to rebrand itself as a fair driven by art and design. Pool usually asks one of its exhibiting brands to serve as art director for the entire space. For the forthcoming show, Pool picked four lines — Purlieu, Quiet Hero, Gama Go and De*Nada — to create graphics and drawings that will be displayed not only on the show floor, but also on flyers and ads launching in national publications. “We want to be known for representing emerging talent and offering a larger platform for emerging exhibitors,” Seeley said.

Sensitive to the needs of up-and-coming businesses, Pool will offer free electrical usage without raising booth prices, Seeley said. What’s more, it plans to host a lounge where exhibitors can relax and network with other vendors. “Pool seems to be a launching pad for a lot of people,” Seeley said. “We’re trying to make more of those connections.”

Project, which will run Feb. 13 to 15, also connects the dots between premium product, quality and price points for what it bills as one-stop shopping in contemporary fashion and high-end denim. The formula works, judging by the figures for February’s show, which tallied an estimated 25,000 attendees who checked out 930 men’s and women’s exhibitors at the Sands Expo Convention Center.

“If you’re in the advanced and/or premium contemporary business, Project is a show you can’t miss,” said Sam Ben-Avraham, Project’s founder and president. Among the directional department stores that send buyers to Project are Neiman Marcus, Saks Fifth Avenue, Barneys New York, Bloomingdale’s and Holt Renfrew, he said, adding that international department stores, luxury chains and specialty stores also add to the mix of retailers.

“Most notably, we’re seeing a marked increase in attendees who buy women’s exclusively as well as the better-designer men’s category,” Ben-Avraham said. “These are stores that typically carried only tailored clothing along with higher-end sportswear and luxury items.”

Not to be outdone, the MAGIC Marketplace, which will run from Feb. 12 to 15 and encompass MAGIC, WWDMAGIC, MAGIC Kids and Sourcing at MAGIC, also vies to attract more specialty retailers by teaming up with niche shows.

After making its debut in August at the Venetian Resort Hotel Casino with an estimated 130 brands, including Biatta Intimates, Betsey Johnson Intimates and PrimaDonna, Lingerie Americas will join forces with MAGIC to hold its sophomore show in the Hilton Hotel adjacent to the LVCC.

Printsource also will return to Sourcing at MAGIC after its premiere in August with 38 textile lines. Though the August show focusing on spring and summer collections is its bigger showcase, the International Swimwear/Activewear Market will hold court at the LVCC’s North Hall, near WWDMAGIC’s casual lifestyle vendors, with 10 to 15 swimwear and accessories lines, such as True Religion, California Waves and Banana Peel.

Among the veterans of the satellite shows outside of MAGIC is WomensWear in Nevada, or WWIN, taking place Feb. 11 to 14 at the Rio All-Suite Hotel & Casino. In its 10th year, the show specializes in women’s accessories and clothing in the misses’, plus and tall categories, attracting an estimated 2,000 lines such as Cynthia Max and FDJ French Dressing.

New to WWIN this year is the addition of the KIDShow, which has outgrown its space at the Riviera Hotel & Casino. It will run Feb. 11 to 13 at the Rio, drawing about 240 exhibitors, a 20 percent increase compared with the year prior.

Some 70 percent of WWIN’s buyers hail from cities located west of Dallas, said Jeff Yunis, owner of Specialty Trade Shows, which produces both WWIN and KIDShow. WWIN typically draws about 6,000 buyers representing 2,500 retail stores. About 1,100 buyers from as many as 700 stores are expected to attend the KIDShow, he said.

About 200 to 250 sourcing providers from at least 10 countries, including China and Pakistan, will be on hand at the ASAP Show taking place Feb. 11 to 14 at The Venetian Hotel’s Marco Polo Ballroom. Bangladesh is the title country, benefiting from ASAP’s marketing push in promoting the country’s low labor costs and experienced workforce, which are assets at a time when the U.S. dollar is depreciating.

“China is considered expensive now as a place to source, so countries like Bangladesh have an edge in competing in the market,” said Norbert Yuan, vice president of business development for ASAP, noting a minimum of 50 businesses from Bangladesh will be exhibiting.

The dollar’s fall is another reason Yuan expects strong attendance of about 3,000 importers, manufacturers and department stores, ranging from Fruit of the Loom to Macy’s, that will be seeking sourcing alternatives.

Fashion will make a small green imprint at the Global E.C.O. Apparel Trade and Fashion Show, expected to draw about 20 to 30 vendors, most of which sell clothes in the baby, yoga and maternity categories. Upholding the fair’s environmentally friendly theme, clothes need to be crafted from organic cotton, bamboo or soybean fiber. Other products will include candles and home linens. The show will take place Feb. 11 to 14 inside of the ASAP Show at The Venetian.

Moda Las Vegas and its sibling, AccessoriesTheShow, will share space in Hall D of The Venetian from Feb. 13 to 15. Based on its well-heeled debut in August, Moda’s sophomore run in Las Vegas will be bigger, growing 25 percent to 400 juried ready-to-wear lines, including newcomers Emil Rutenberg, Marisa Baratelli and For Joseph. To boot, AccessoriesTheShow also will boost its presence by 35 percent to more than 500 lines spanning 37 categories, such as handbags, jewelry, scarves, belts and hats.

The show’s higher-end fare has found a receptive audience in specialty department stores and national boutiques, said Britton Jones, president & chief executive officer of Business Journals Inc., which owns the shows. More than 5,000 buyers are expected to attend, including retailers from Japan, Canada and South America.

CurveNV is another recent entrant to Las Vegas, staging its third run from Feb. 14 to 16 at The Venetian with about 190 brands including Calvin Klein, Cosabella, Vera Wang and Free People. The fair attracts about 2,000 to 2,500 retailers, most of which are specialty stores along with some department stores and online accounts, including Neiman Marcus, Macy’s and Nordstrom.

To enhance its offering, CurveNV has teamed up with Samantha Chang, designer and founder of the Boutique Lingerie show, a format known for its cadre of smaller, higher-end designer brands. Boutique Lingerie will occupy a section of the CurveNV show with about 40 brands, such as Cotton Club, Madame V and Cadolle.

The goal with Boutique Lingerie is to serve the retailer’s needs, said Laurence Teinturier, executive vice president of CurveNV. It’s the same reason the show is running a day longer than MAGIC: to give independent boutiques a chance to shop after the Valentine’s Day rush.

In times of economic uncertainty, the Off-Price Specialist Show, where products sell for 20 to 70 percent below wholesale prices, may hold greater appeal for buyers and vendors. The fair runs Feb. 10 to 14 at the Sands, drawing a delegation of 10,000 to 12,000 buyers, from large discounters such as Ross Stores and Citi Trends, to independent stores in the U.S., Canada, Panama, Puerto Rico and Australia. More than 450 vendors spread across 900 booths will offer apparel for men, women, juniors, kids and petites, along with footwear and accessories.

Retailers can expect to see a greater designer push, according to Don Browne, Off-Price’s marketing director. “Our off-price specialists are leveraging their relationships with offshore producers and buying designer product overseas and bringing it here,” Browne said.

Streetwear show United Las Vegas, meanwhile, will be held from Feb. 12 to 14 at Alexis Park Resort.