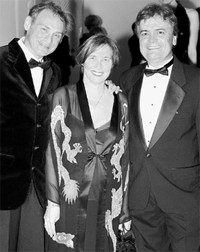 DALLAS — Persistence paid off at the Dallas Fashion Awards, where most of the companies collecting trophies have logged many years at the International Apparel Mart.

Winners in the women’s categories were:

Many of the labels have shown here a decade or more, and they each received a silver Femme trophy plus a chocolate replica supplied by the Hotel Crescent Court, which sponsored the evening along with PaperCity magazine and Ciroc vodka.

Retailers picked the winners in the 28th annual competition, which recognizes manufacturers for innovative design as well as strong sales.

“It’s a sign of the times,” said Dana Melton, who represents Streets Ahead. “The retailers are doing business with companies they trust and that they know have the financing to ship the product.”

The black-tie ceremonial dinner for manufacturers, sales representatives and buyers was held for the last time in the Great Hall of the Mart, which is closing in January. At that time, tenants will move to new space in the nearby World Trade Center.

In addition, the Dallas Market Center presented its top honor, the Fashion Excellence Award, to Diane von Furstenberg, who showed her spring collection on the runway at the gala.

“Along came Diane von Furstenberg and her wrap dress, and at the age of 30 she was shipping 25,000 dresses a week,” said André Leon Talley, editor at large for Vogue, as he presented the award. Recounting how the label later floundered, he continued, “She flipped a near-death Diane von Furstenberg label off a hospital bed. She’s one of my best friends — we met in 1975 at some great party with Andy Warhol and Diana Vreeland, we bonded and we’re still bonding.”

“It’s very hard to please André, so if he gives you an award, you know you’ve made it,” von Furstenberg responded. “I still do travel like Willy Loman — I’m sure you all can relate to that in this room. Five years ago, I started again because the customer came looking for me, and I was encouraged by this whole new generation that was buying my clothing in vintage stores. When young girls think you’re hip, it’s better than Botox!”

In addition, Frédéric Fekkai was presented with the Personal Style award by the DMC.

“I don’t think I’ve ever had a celebration like this,” Fekkai said. “I was asked by a reporter about who I think has style. I believe that anyone who has style doesn’t get on your nerves.”