Couturiers aren't the only ones who've been holed up in their Parisian ateliers during the last few months beavering away on their collections. 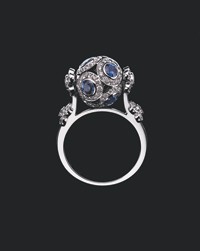 Couturiers aren’t the only ones who’ve been holed up in their Parisian ateliers during the last few months beavering away on their collections. A network of the city’s most skilled jewelry artisans have been working for up to a year on major haute joaillerie collections that were unveiled during couture week.

LOUIS VUITTON: It’s never too early for a retrospective. Consider Louis Vuitton, which mounted one for its two-year-old fine jewelry business on Thursday, when it also introduced some new jewelry sets with floral motifs. Called l’Emprise des Fleurs (Under the Influence of Flowers), the haute joaillerie had two themes: one a delicate floral story featuring a necklace articulated with fine diamond strips, and the other, sparer and darker, expressed in sapphire- and ruby-infused sets with aubergine Tahitian pearls in the diamond petals of monogram flowers. The edgy Emprise line was also on display, representing the house’s first full foray into fine jewelry in July 2004.

“Marc [Jacobs] wanted to deliver a fresh take on jewelry with an element of fun that was considered quite a daring move at the time,” said Jean-Louis Roblin, director of Vuitton’s accessories department, pointing out the asymmetric diamond monogram earrings.

CHANEL: Diamonds and pearls form the precious ingredients of Chanel’s collection, inspired by the fine jewelry Coco Chanel introduced in 1932. That line was all diamonds, including the famous “comet” motif, but one can’t fully pay homage to Chanel without pearls.

One necklace features a looped mesh of diamond ribbons punctuated by South Sea pearls, and the Swing Perle pin is a fireworks of pearls splayed from a diamond center. But the collection’s most moving piece, literally, is its fiber-optic Swing Perle necklace — a quivering wreath of pearl and diamond-tipped white-gold spindles.

BOUCHERON: Not many wild thistles are kept under lock and key. But then, not many bear purple sapphire fruit or milky opals on white-gold needles and emerald-embedded leaves. Chez Boucheron, however, they do. The spectacular thistle necklace belongs to the house’s Trouble Desir (Trouble Desire) theme.

“The more voluminous and heavy the piece, the lighter it must sit on its wearer, with the help of an invisible network of intricate articulations,” explained Boucheron’s heritage director, Odile Emanuelli, adding that each piece has taken hundreds of hours to craft. “It has to look like it floats.”

Another stunner is the Dark Swan necklace that’s embedded with a blue spectrum of over a thousand sapphires. And a diamond-studded ostrich plume necklace — fit for the Folies Bergères — dangles a detachable yellow diamond pendant from its tip.

VAN CLEEF & ARPELS: What’s better than a day spent promenading in Paris? That’s the theme behind Van Cleef & Arpels’ collection that begins with an imaginary morning at the Jardin des Tuileries and ends at the Ritz. Here, a group of diamond-encrusted chestnut tree leaves folds across a ring, there peonies and butterflies climb up a diamond pin. The city-themed pieces include a geometric Notre Dame set inspired by the cathedral’s rose window; a couture-inspired Avenue Montaigne theme featuring a detachable diamond cravat that doubles as a choker or a bracelet. An array of fireworks-inspired diamond pieces fit for dinner at the Ritz serves as the collection’s bouquet finale.

The house’s piece de resistance, however, is a ruby and diamond-encrusted bird brooch, priced at around $1.2 million that took 1,400 hours to craft.