Staying In The Swim Of Things

California swimwear brands go against the current to keep operations on shore. 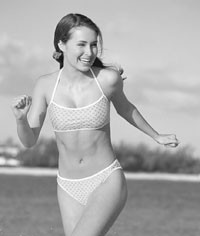 Say California, and what instantly and inevitably comes to mind is the sunshine — and the swimsuits. And rightly so. The $3.1 billion retail swimwear market in this country looks to the Golden State for bikinis, and some 75 swimwear companies with sales worth an estimated $400 to $500 million — including iconic labels such as Cole of California and Speedo — keep the world scantily clad.

And much of that demand, naturally, comes from out of state. “Holmes does really well for us, as do other California designers,” said Dalya Esfahani of Cantaloup in New York. “There’s definitely great style out West.”

Although pressures from retailers and consumers to keep prices down are increasingly forcing California brands to look beyond state borders to get their products manufactured, there isn’t exactly a mass exodus under way to move operations overseas.

A considerable number of fashion swimwear makers are sticking with local production. It’s a case of the pros — quicker turnaround, tighter quality control — outweighing the con of higher costs.

“Offshore manufacturing is a reality for companies that have private label and lower-tier business. But fashion-forward lines need to stay close to home. Or at least companies need to balance the two,” said Howard Greller, managing director of Los Angeles-based Waterfront Design Group, makers of Rampage, W Swim and Gloria Vanderbilt Swim. “If you can get in the game and make the cheapest suit, that’s great. But there’s always going to be someone who can do it for less, and then what are you left with? At least with a fashion product, you always have your brand.”

Alex Bhathal, executive vice president of Tustin-based Raj Manufacturing, makers of Guess, O’Neil and Athena swimwear, concurred. “A lot of people think Asia is going to be a panacea, but I have reservations. Cost and processing have been some of the least important factors in the industry. Way more important is fit, quality and design. You sacrifice a lot by going to Asia.”

With retailers operating on an increasingly short schedule, quick response has become the only option for survival.

“Years ago, we’d get orders for February in November. Now, on Monday we get orders for Wednesday,” said Susan Crank, president of manufacturer Lunada Bay Corp. “That means building and maintaining inventory at a high level, which is much more labor-intensive.”

More than ever, when retailers say, “Jump,” it’s up to swim manufacturers to ask, “How high?”

Responding to retailers’ needs, Lunada Bay added a showroom at its Anaheim headquarters eight months ago so buyers can come to them and experience the company’s full offerings.

Although manufacturing in China and Mexico can save money, many California companies hesitate to move operations altogether. Separates — now an integral part of the business — require constant replenishment and adjustment.

“I tend to buy from companies that replenish, because 95 percent of my junior business is separates,” said Helmut Behensky, owner of the Southern California specialty chain Bea’s Swim & Resort Wear. “Raj Manufacturing, Sunset Separates, Point Conception, Beach Patrol and Rampage can do that.” In contrast, Behensky noted, companies headquartered here that do production outside the United States have been slower to turn around his requests. “I’ve had some problems with reorders from Apparel Ventures and Authentic Fitness,” he said.

But the low labor costs outside the U.S. are also part of doing business in the modern world, and many companies have had to strike a balance.

Los Angeles-based Apparel Ventures has moved some of its production to China, but keeps the manufacture of trendier lines local.

Authentic Fitness, also headquartered in Los Angeles, said it monitors quality control at its own Mexican factories, 1,700 miles away in Tetla and Huamantla, a two-hour drive from Mexico City. It takes finished goods three days to arrive back in Los Angeles by truck.

“I’m on the phone with manufacturers every day trying to get my suits,” said Julie McMackin, owner of Molly Braun’s Swimwear in Newport Beach. “I know there are more delays when things leave the country, but we work through the problems. I’m loyal to companies. Those issues don’t stop me from working with them.”

To balance cost with quality, Manhattan Beachwear, a division of Los Angeles-based Maxine Swim Group, divides production for its label business by 25 percent in Los Angeles, 25 percent in Puebla, Mexico, and half in Guang Dong, China.

“So far we’ve been happy with the quality of goods,” said Manhattan Beachwear sales director Lisa Keen. “But you always have to be aware that quality could be compromised, whereas before, that wasn’t a factor. The business has changed dramatically in that way.”

While mass-tier junior and missy labels continue to be price driven, and therefore more likely to be produced overseas, cost isn’t a factor in the contemporary market, where customers don’t blink at spending up to $150 retail for a suit.

“At the end of the day, the consumer will pay for what she perceives as value in the fashion,” Crank said.

Naturally, it’s an arena where every company tries to maintain its edge — along with its profit margin.

Some of the state’s most successful newcomers — Ashley Paige, W Swim and Holmes — have capitalized on quirky cuts, colors and fabrics to find their way into Bergdorf Goodman, Saks Fifth Avenue and Nordstrom.

“The explosion of small-name labels in the contemporary market has told us that you don’t need a brand name to sell suits. But you do need an interesting product,” said Greller of Waterfront, makers of W Swim, which received reorders with the line’s inaugural collection, 2004 cruise.

Of course, reordering popular suits can be an issue for companies with limited production runs. “Specialty swim is getting harder to obtain. If something is in Sports Illustrated, it’s gone. There won’t be another order,” McMackin said.

Typically, spring — not cruise — is the busiest season for California’s swim retailers. Retailers that cater to the cruise customer buy at the Miami Swim Show, which kicks off the swim season in July. After leaving Los Angeles in 2002, the International Swim and Activewear Market now takes place a month later in Las Vegas.

Although that means there is no longer a swim-focused trade show based in California, it has apparently not put off retailers. Bea’s Behensky, for one, hasn’t run to Las Vegas — yet. “I may have to in a couple of years, but now I continue to shop at the California Market Center and at ASR,” he said, referring to the downtown L.A. showroom building and the biannual action sports-oriented trade show in San Diego. “We have a three-month lag after Florida. We can afford to wait.”

Still others, like Justin James of Liquid Assets in Fresno, depend on other shows as well. “We don’t miss ASR in September, but we also go to MAGIC, ISAM and NORCAL, a rep show in Santa Cruz. It’s a big leap from those cities to Fresno. It would be nice if there were more regional shows.”

While the warm, sunny weather may keep California natives and tourists in swimwear year-round, what will happen with the state’s increasingly chilly business climate remains to be seen.

The high workers’ compensation, labor and electricity costs and excessive paperwork required for each contractor could be wearing out manufacturers’ patience and resources.

“It shouldn’t have to be that way, and I plan on appealing to lawmakers in the future,” said Lunada’s Crank.

Others, like Raj’s Bhathal, are taking a wait-and-see approach. “The government should be trying to keep jobs in the state instead of driving them out. So we hope it’s going to become sweeter going forward.”