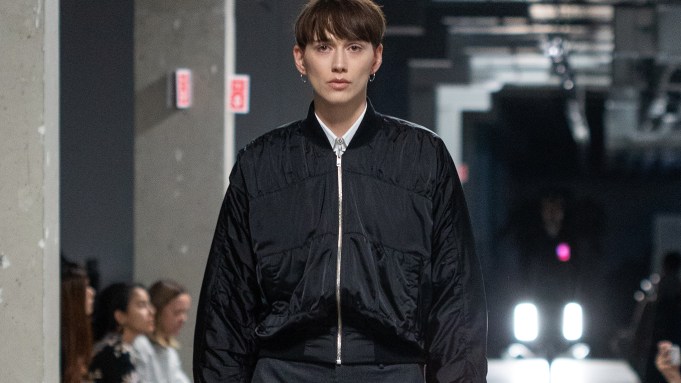 MONTREAL — Stefano Pilati decamped from Berlin to Ssense’s headquarters in Montreal to introduce his new unisex line, Random Identities, which will be sold at the Canadian e-tailer.

Ssense staffers lolled about their desks as guests filed in to watch the runway show, which was accompanied by a musical performance by Finn Lynden, seated at a piano in the center of the austere offices.

The collection wasn’t too far from what Pilati had already teased on social media: track pants, puffer jackets, bomber jackets, trousers, trench coats, oversize polos and knit dresses in a mostly black palette. It was what people wear every day, but he tinkered with silhouettes. Most of the jackets draped off the models’ shoulders or were cinched at the waist, while voluminous track pants came in at the ankle. Pilati designed a black, laceless corset that he styled over T-shirts. Models sported black leather boots, reminiscent of the Margiela boots Pilati has worn but they had a rubber tip. Pilati was wearing the style as he greeted guests after the show.

“This offered me a certain amount of freedom that I needed to get accustomed to. I had to wash off a lot of mechanisms and a lot of reflexes. I was so embedded in what the system needed and targeting a specific market with a specific kind of heritage and here it’s free. But it took time,” Pilati told WWD at the after party, where he tried to recreate Berlin nightlife on an Ssense office floor that overlooked Montreal. “The only dose of ego that I have in this project is I wear the clothes and I get inspired by my archive.”

Rami Atallah, the cofounder and chief executive officer of Ssense, said he started speaking with Pilati about the collection around January or February — the designer showed looks from the line in June via Instagram stories — and he had long admired Pilati’s design talent. He was also intrigued by the concept. It was Pilati’s idea to show the collection, which retails from $115 to $530, at Ssense’s headquarters and live-stream the show. The pieces were available to purchase on Ssense immediately following the event. They will also be available at Dover Street Market.

“This is something, in my opinion, that’s fresh and new. From the business model to the aesthetic to the approach,” said Atallah, who noted that the collection will be merchandised in the men’s and women’s shopping verticals on Ssense. “I feel that the world is looking for something new and this is challenging a lot of the rules and conventions.”

In an article he published on Ssense’s web site, Pilati said the following: “Random stands for the randomness of existence, and Identities stands as a response to that randomness. The two terms define the space where people can identify themselves not with trends, but with personality, function, quality and design. But above all, a confidence in integrating new codes indicative of the gender shift we are witnessing.”

After leaving Ermenegildo Zegna in 2016, Pilati moved to Berlin and soaked up the nightlife, which informed his new line. In addition to having a new set of influences, Pilati also seems to be frustrated by the current crop of fashion designers whom, he wrote, “are proud to be amateurs without realizing the damage they do to the society at large.” He added: “Presently, I am angry with the system because fashion skills have been reduced to applied ideas without method, but formats; pre-constructed formats.”

“It’s a response of an observation that I have of a new generation that I got in contact with differently than before. When I worked for different companies, my assistants were young, but between them and me there were four people, so I never had the chance to really interact with them. So I listened to my new friends around me,” said Pilati. “With my first line I said it can’t be selfish. It needs to be generous because I have the age to be generous. Before I was more into my career. I had come from nothing and I made it so you become jealous of your territory. Now it’s like giving, giving, giving.”

But with this newfound freedom and sense of generosity, would Pilati ever go back to working for a luxury brand?

“I would never say never, because that’s the motto. But I don’t think so,” said Pilati. “Unless it’s something that I can tailor around myself.”

The night ended with cocktails and a performance from Ugly Birds, a band from Berlin that has only played live a few times. The lead singer, Josie Michalak, and band member Luki Von Der Gucht walked in the show. Pilati bounced around the floor, filming the band on his iPhone.

While he has a strategy in place for Random Identities, he didn’t want to reveal the details.

“I have a plan, but I’m also convinced that the plan will be way more appreciated if I don’t talk about it,” he said.