Until now, Blythe Harris, co-creator and chief creative officer of San-Francisco-based Stella & Dot, has been designing all of the brand’s jewelry (Ruth Bader Ginsburg wore the spiky Phoenix layered bib necklace in her 2018 official Supreme Court portrait), apparel and accessories with a team split between the Bay Area and New York.

“Compared to five years ago when we couldn’t find talent, now we can and the synergy outweighs the need for a bi-coastal studio,” said the designer, who is closing the satellite office in New York, and “tightening the brand’s point-of-view on casual chic.”

Now that Stitch Fix, Everlane and other San Francisco fashion-tech startups are coming of age (and setting $1 billion-plus public offerings), they are recruiting and retaining more talent, including designers, stylists and editorial directors, and a new creative class is starting to emerge in the city.

But Stella & Dot is the grande dame, founded by Jessica Herrin in 2003 as a multilevel marketing or “social selling” brand taking inspiration from Mary Kay. Herrin had already cofounded Weddingchannel.com, an online bridal planner, during the first tech boom, and sold it to The Knot in 2006 for $61.7 million in cash and 1.15 million shares. In 2010, Stella & Dot attracted Silicon Valley venture capital firm Sequoia Capital, an early investor in Apple, which invested $37 million for a 10 percent stake. Earlier this year, it launched a new Mimi app that lets sellers be micro-influencers and text their friends and acquaintances recommendations of product they might like, to help push the business model online. (Shoppers can also buy directly from the web site.)

Although the brand is more fashion than some of its counterparts in San Francisco (think statement earrings, lots of color and a boho-traveler spirit), Harris said it still taps into the functionality that is defining the region’s aesthetic.

“We are about sophisticated silhouettes but configured to be user-friendly,” said Harris, noting some of the most popular offerings are the Covet Waverly cross-body bag that can convert into a clutch, and the Sutton necklace that can be worn five ways.

After relocating from New York to the leafy suburb of Mill Valley in 2013, Harris works between the brand’s headquarters in Brisbane and her own maker’s studio in Sausalito. It’s located in an old shipyard that has become a hub of art and fashion studios that includes the headquarters for footwear brand Freda Salvador, a new textile company from Serena & Lily founder Serena Dugan, jewelry designer Amy Nordstrom, Sarah Swell, Chris Galvarini and Neve and Hawk. Harris has become a leader in the area’s burgeoning creative community, hosting monthly meet-ups for fashion professionals to trade insights.

WWD caught up with Harris at her Sausalito studio, where she brainstorms new collections, to talk about how she carves out creative time and gets inspiration in San Francisco.

WWD: The brand headquarters is in Brisbane but you work here three days a week, why?

Blythe Harris: I felt strongly about keeping this as a makers space. I need a lot of stuff around me and materials, a ton of vintage samples and paints and colors and cutouts. And the vibe here is totally different. This whole building is artists, entrepreneurs and painters. It comes with its charm — the heat doesn’t work half the time, but it feels like home.

More from WWD: Sonia Martin on Going From Juicy Couture to Everlane VP of Design 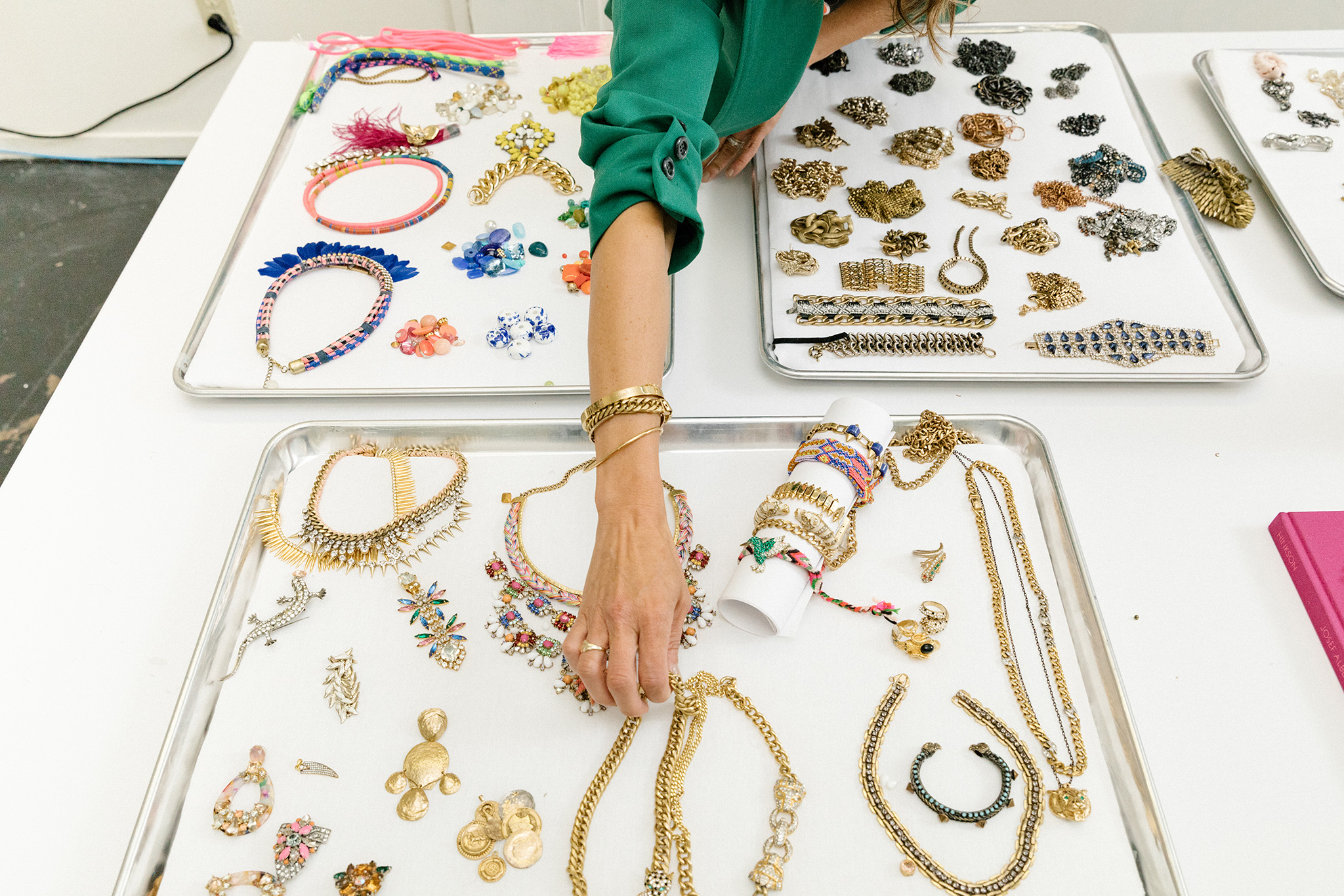 WWD: Where do you get all your vintage jewelry?

B.H.: A lot from Paris flea markets over the years and different vintage dealers, Brimfield, there’s a store in Bridgehampton called Barbara Travillo. She has amazing estate jewelry. I’m starting to feel statement jewelry again. We’re going to do a whole campaign around making a statement, whatever your statement is, around strong female muses.

WWD: Tell me about some of the inspiration materials.

B.H.: This is a vintage lace book I inherited from my grandmother. Her dad was a European lace manufacturer in Switzerland, so she had an amazing collection of lace pieces. One of our first cuff bracelets was inspired by her, and we’re doing a whole collection inspired by her that’s coming out later this year. I love to cast things in metal. These were cast from shells. I went to Mexico City in February, and I’m working on a collection for September inspired by Frida Kahlo. I like to have the space for mood boards and to paint and put things on the walls, and for my trays of jewelry because I take things apart and put them back together. I like to play. We do all custom components, including stone cuts, there is a lot that goes into it. 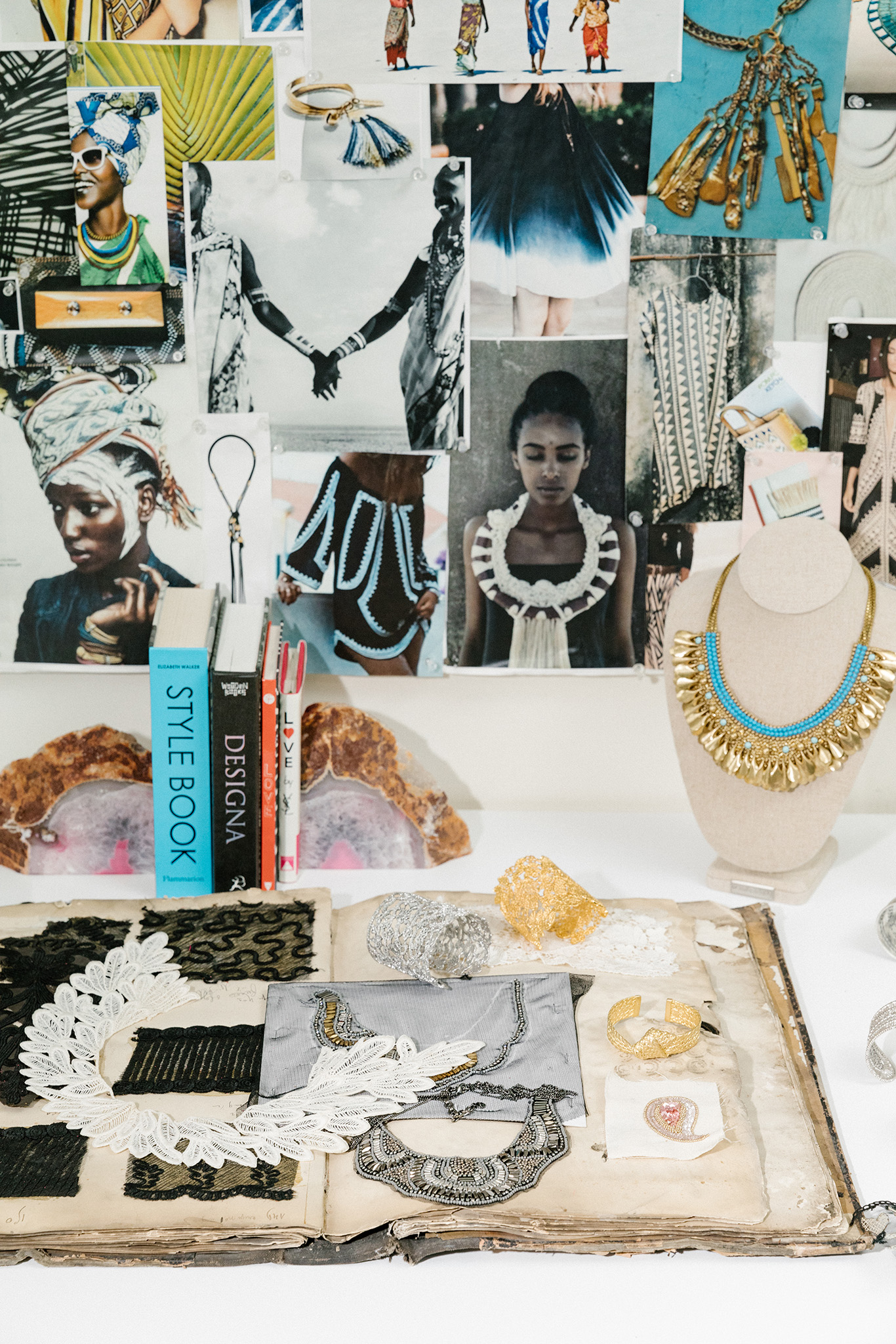 WWD: Why move all design to San Francisco now?

B.H.: One, it’s the confidence of doing it for 12 years. We’re old enough we know who we are and don’t need to rely on New York to feed our inspiration. I did used to have this belief, and moving from New York was hard, it felt like major flow of inspiration was gone. Now, we know exactly what our design filters are. The other thing is, speed of trends on Instagram. It’s so much faster and more democratic. I like to take that and go travel.

B.H.: We’re not trying to be a fashion insider brand. We want to let women know we see them, so it’s about the confidence game. Our girl has a casual lifestyle, if we can bring more fashion and chic that intersects with her casual lifestyle and give her more sophisticated ways to be on trend but not trendy — that’s where we want to be. People don’t aspire to “The Devil Wears Prada” anymore.