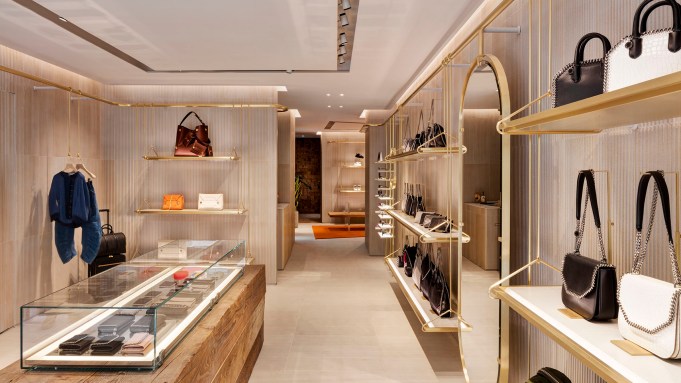 Stella McCartney is bullish on the retail front, opening four new stores in major markets in the next two months, while introducing a new design concept.

McCartney’s second Paris location opened earlier this week with a two-floor space at 231 Rue Saint Honoré in the 1st arrondissement. She first opened in Paris in 2009 at Galerie Valois of the Palais-Royal gardens. By July, there will be additional stores in Florence on Via Dei Tosinghi, South Coast Plaza in Costa Mesa, Calif., and a second store in New York at 929 Madison Avenue, bringing the brand’s store network up to 51 freestanding boutiques. McCartney’s original New York store is on Greene Street in SoHo.

“Some of these cities are so personal to me,” said McCartney. “It’s a dream to have a store on Madison Avenue. You know, I’m half-New Yorker and uptown is kind of the part of the city that I understand from a family point of view, so to finally arrive there is absolutely a dream come true. It feels like such an achievement for us, I’m so proud of all of us that we have that store. And it feels right for us to be there. We looked for a long time in that location and we struggled to find the home for us this space really feels right for us.”

“The opening of these new shops in these four key locations is fundamental to accelerate the strength of our brand and allows our current and future customers further accessibility to the Stella McCartney brand,” said Frederick Lukoff, ceo of Stella McCartney.

The new design concept is meant to hone in on the brand’s commitment sustainability, which is one of the key tenets of McCartney’s label. A brass rail system will connect different product categories, including ready-to-wear and accessories, lingerie and swim collections. All furniture was personally selected by Stella from auctions or commissioned from contemporary designers.

“I wanted to explore new finishings by looking at more sustainable and environmentally friendly textures that could be manipulated into a more modern, contemporary feel,” said McCartney of the new design concept. “We looked at something as ancient as ceramic and playing with it in these key cities where this is a texture that has historically been used for hundreds of years, but to modernize it and integrate newness within something that is so historical. I really wanted our customers to have an emotional reaction to the textures in the store, and not only respond to the product but also to respond to its environment.”

Duchess of Cambridge Embarks on Solo Trip to Luxembourg