The creatives at Holland and Holland have curated works for a capsule exhibition at the brand's Bruton Street store, ahead of an auction in mid-November.

Tennant and Cawdor with a William Scott abstract painting from 1967.

LONDON — Stella Tennant and Isabella Cawdor have become the latest British creatives to demonstrate their love of fine art, working with Sotheby’s on a show of mid-century works that will be auctioned next month in London.

The exhibition will run from Nov. 8 to 13 at Holland & Holland on Bruton Street in London, with the auction slated for Nov. 19 and 20 at Sotheby’s on New Bond Street.

The women chose works that underline the play between landscape and abstraction, landscape being a major consideration in designing for Holland & Holland.

The works will be sold at auction as part of Sotheby’s Modern & Post-War British Art sales. 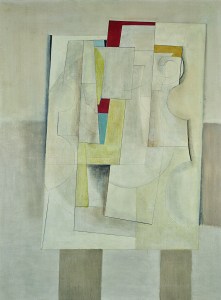 “Every collection at Holland and Holland starts with the weather and the landscape — the clothes we make are designed to work in the landscape, both visually and practically. The tweeds in particular are inspired directly by the landscape and the tweed mill archives, often going back over a century, show the endless innovation and possibilities,” Tennant said.

She added that the Modern British artists and the brand share an “overriding passion for the British landscape. Artists like John Piper and Ivon Hitchens capture a sense of atmosphere in their paintings and we have been very inspired by their rich colors. Hitchens would go back to the same view and paint it over and over, ‘en plein air,’ an active engagement that allows him to convey the spirit of the place, time and weather with his energetic brush strokes.”

She added that sculptors such as Henry Moore and Barbara Hepworth physically engage with the materials of the landscape, carving stone and wood into abstract forms “very much taken from the environments where they lived. You can see how Hepworth’s works are inspired by the elements around her. I love how Hepworth uses the contrast of texture from very rough to a perfectly smooth curve that’s inviting you to touch.” 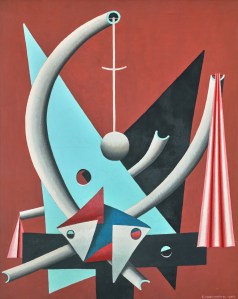 “What attracts me to their works is their vision of Britain – which inspires us and has always inspired Holland & Holland. Then you look at someone like Winifred Nicholson and her painting trips to the west coast of Scotland and you can introduce her delicate colors, particularly her wonderful lilacs. I look at photographs of Augustus John and his followers, the Bloomsbury group at Charleston and they all wore practical but beautiful clothes that reflected their aesthetic.”

Simon Hucker, Sotheby’s Modern British art specialist, said there is a natural affinity between Tennant and Cawdor’s aesthetic and that of a number of British artists of the 20th century, “from the colors they use — those deep greens, slate blues and russet reds that are instantly evocative of this wind-swept, rain-soaked land — through to their interest in texture and irregular pattern and the distinct physical quality of materials.”

He said the display of modern artworks alongside Holland and Holland’s contemporary designs — speaks of their timelessness, as well “as their roots in the experience and physical nature of the British landscape.”