By Miles Socha and Samantha Conti on November 10, 2016
View Slideshow 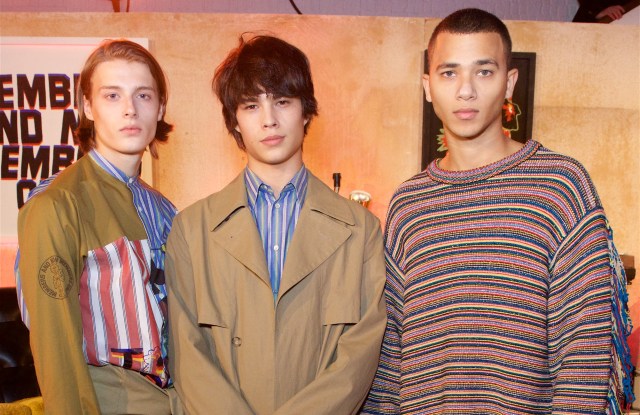 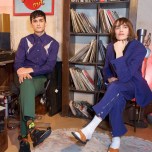 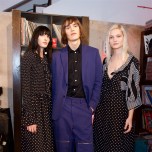 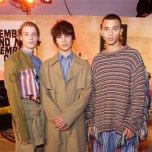 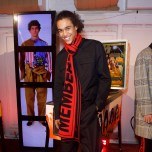 “I’ve known Paul since I was 17, and I came here a few times when The Beatles were recording. This place is legendary,” said the model.

But it was a first for the musician’s designing daughter, who channeled the free spirit of the Sixties and Seventies into her debut men’s wear, which she unveiled at a lively party alongside her spring 2017 women’s collection, her first foray into see-now-buy-now.

The younger McCartney grew up surrounded by mod and bohemian styles — for both sexes. She said her father used to wear a fancy embroidered tunic, which became a family fashion heirloom and fodder for the Stella label.

“We did it in women’s wear first…and we thought it was a blouse of my mum’s, and then we saw a picture of my dad in it and we went, ‘Oh my God, it’s Dad’s,’” the designer squealed Thursday, during a preview.

A version of that tunic figures in her collection, telegraphing the designer’s wish to bring more “attitude” and “life” to the men’s fashion arena — along with all of her ecological and ethical convictions.

“We feel like we’re launching a brand-within-a-brand with men’s,” said McCartney, who chose to unveil the women’s spring 2017 pre-collection on Thursday alongside her men’s 2017 offer. Orders were taken for both collections in the June-July period, with the languid women’s collection arriving in stores now, and the men’s in early January. A little see-now-buy now and a little see-now-buy-very-soon.

McCartney, who launched her fashion house in 2001 as a joint venture with Gucci Group, now part of Kering, confessed she was “out of her comfort zone” with the men’s foray.

WWD broke the news about the new product volley on Feb. 16.

“It’s funny because I’m a woman designing for women and it’s been at the heart of everything we do. Something like 80 percent of our employees are women. It feels so right, genuine and effortless and modern — and relevant. And I do think there’s some merit to doing that same thing for men,” she said.

According to McCartney, whose husband Alasdhair Willis test-drove a double-breasted, peak-lapel blazer at her Paris Fashion Week show last September, men “have the same problems in their wardrobe as women and approach their wardrobe in a similar way to the women that come to my house already.”

As models strode around during a preview wearing boxy jackets and macs paired with sleek cargo pants and sandals worn with socks, McCartney explained she aims to dress many different kinds of men, as she does many kinds of women.

“There’s definitely a kind of street, sport, youthful vibe to this collection, and then there’s definitely the heritage that I have in Savile Row tailoring. It’s sort of unavoidable for me,” she said, pointing to a rack of women’s wear showing a similar breadth of products. “Look, there’s a nylon puffer jacket next to a lace dress.”

The venue for the party, which featured such performers as Neneh Cherry, Beth Ditto, Paul Simonon and Mike D from Beastie Boys, highlighted that musicians, from The Beatles era through to the London rave scene, “heavily inspired” the collection — more so in freewheeling spirit than in literal interpretations of the Seventies or Nineties.

“It seemed like there was a moment when men were allowed to be a little bit looser in how they wore clothes…liberated in a sense,” McCartney mused. “So we have to bring something to the table.”

Cue swallows printed on the front of a navy shirt or a beige Harrington jacket, and a color palette that favors quirky shades of blue or rust over navy and gray.

Positioned at the approachable end of designer collections, the men’s wear is to be showcased in about 15 of Stella McCartney’s 42 stores and at about 200 wholesale doors worldwide, including such retailers as Selfridges in London and Manchester; Saks Fifth Avenue in the U.S.; I.T. in China; Apropos in Germany; Restir in Tokyo, and Matchesfashion.com and Ssense.com for online.

“It was a real sacrifice for men, a vegan shoe,” McCartney confessed, which is why her father and Morrissey imposed on her in recent years to make them bespoke Chelsea boots and brogues.

The designer noted that almost half of her debut men’s wear is made with sustainable raw materials, including organic cotton and denim, recycled nylon and polyester, and Ultrasuede, true to her antifur and antileather convictions and in keeping with her annual environmental profit and loss account, which measures the company’s impact on nature.

“Our point of difference has always been that we’re sustainably minded,” she said. “And that is something we’re delivering with men’s from the outset.”

She also plans a wardrobe-building approach. “We’re very trendless in what we do. There’s the thing of the moment, but we tend to respect that time continues,” she said.

The event, which sprawled across two studios, one for men’s wear and the other for the women’s collection, underlined McCartney’s sense of fun and unconventionality.

“It’s delicious,” Salma Hayek said as she entered the party with her husband, Kering honcho, François-Henri Pinault and grabbed a slice of Stella branded pizza.

M.I.A. said she’s working on videos for singles from her latest album, “AIM,” but won’t be touring extensively until next spring. “I have one show in China soon,” she said.

Bloom was just back from China where he was filming “Smart Chase,” in which he plays “a British expat sending valuable art objects of out the country.” But his blonde hair was for final scenes of “Pirates of the Caribbean: Dead Men Tell No Tales.”

Twiggy noted she launched her first beauty range — including an eau de toilette, body cream and candle — with Marks & Spencer this week.

Other guests were also taking a break from busy times: Next week, Stella’s photographer sister Mary McCartney will be launching a book with the British actor Mark Rylance that’s a behind-the-scenes look at his latest production of “Twelfth Night,” while Al-Fayed has switched gears and moved from fashion into food. “It’s amazing – if I had only known this 10 years ago,” said Al Fayed, whose Notting Hill restaurant Farmacy is vegan — although it does serve eggs. The Brits call that “veggan.”

McCartney is the latest London designer to close the gap between showing and selling her collections, although she said she remains committed to the traditional twice-a-year Paris runway show calendar for her main line. It also marks the first time she’s shown her women’s pre-collection in London.

“You’ve got to keep mixing it up,” said the designer of her decision to unveil spring closer to the delivery time. “As a house we want to keep alive, fresh, in the moment. We take pride in delivering something that’s relevant for the time frame, and we’ve always used the pre-season collections to express a less rigid side to the industry.”

Her pre-spring collection was full of drapey, loose shapes and gossamer fabrics, with nature-inspired prints and motifs. A waterfall print spilled over a long layered dress with a dramatic pleated collar, while elegant dogs came dotted across a long, lightweight shirtdress and flower embroidered adorned tops. A navy all-in-one with white polka dots and a ruffle running down the front was a standout. McCartney said she was going for effortless dressing, with pieces that could segue from day to evening.

Texture came in the form of smocking on the bodices of long, organic denim dresses; roomy trousers that gathered at around the ankle — and then flared out again, and a cream lace caftan with deep V-neck that would have suited Talitha Getty. The designer worked rhinestones and country-and western-inspired embroidery onto jeans and tops, and added a dash of zebra patterned knitwear to the mix. She wasn’t going for a matchy-matchy look. “We want to talk through what we’re wearing — and we’re not apologizing for it,” she said.

New accessories for spring include boxy versions of her best-selling chain-edged Falabella bag, including one with handles and cross body chain. “Falabella needed a friend,” McCartney said with a smile.