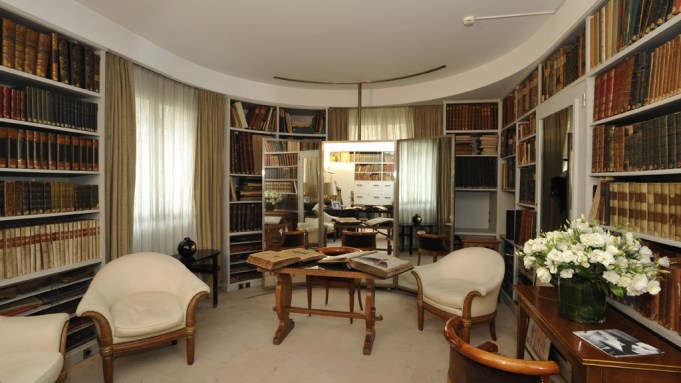 Behind a nondescript door marked 313 on the third floor of Lanvin’s corporate offices at 16 Rue Boissy d’Anglas in Paris is a well-kept secret: the office of Jeanne Lanvin, impeccably preserved almost as she left it in 1946 when she died. At one end of the room is a large, L-shaped ebony desk, a small side table of Scandal and Arpège perfume bottles and examples of the original Lanvin packaging from the Twenties. At the other is a three-way mirror set on rolling castors to maximize the light and angles while Lanvin did fittings, which were held in her office until the end of her career.

The space is usually closed to all but its curators, but in honor of Lanvin’s 125th anniversary, the house is offering a rare glimpse into its founder’s workspace, with archivist Laure Harivel hosting small tours this week for a select few. The contents of the room paint a fascinating portrait of Lanvin, a woman well ahead of her time in fashion and lifestyle. It was decorated in collaboration with two interior designers: first, Armand-Albert Rateau, to whom Lanvin was introduced by Paul Poiret in the Twenties; and Eugene Printz, who gave it a modernist update in the Thirties. Rateau was responsible for the side tables and scroll-back chairs, replications of which Alber Elbaz requested for the stores, while Printz did the ebony desk, mirror and extensive library. Wall-to-wall bookshelves are filled with research materials and scrapbooks from Lanvin’s travels to Amsterdam, Barcelona, Pisa, Venice and Florence, where she discovered the source of inspiration for the signature Lanvin blue in a Fra Angelico painting.

Lanvin did not draw herself, preferring to drape directly on the body, but had a sketch artist render every look from each of her four lines per year — she was ahead of the pre-collection game, calling what’s now known as resort and pre-fall entré seasons. Dozens of these sketches (predecessors to look books) and volumes of embroidery samples were brought in for the anniversary tours.

The drawings are amazing, bound by year, with each look — there were 250 per collection on average — individually named, for example, “Milanese,” “Dionysia” and “La Tour” from 1925. Another book, from 1927, contains sketches from Lanvin’s extensive theater work, dresses worn by actresses in various productions and tours, and exquisite, incredibly modern bridal looks named by client. The sketchbooks span the early Twenties through the Forties, illustrating the breadth and evolution of Lanvin’s work.

Sixteen Rue Boissy d’Anglas is where Lanvin, originally a milliner, started. She opened a hat shop there in 1889 when she was 22 and didn’t begin designing clothes until 1897 when she started making things for her daughter Marguerite to wear — and fashion magazines took notice. She eventually opened a men’s wear department, then an official children’s collection in 1908, with a women’s collection to follow the next year, when she was admitted to the Syndicat de la Couture.

During Madame Lanvin’s day, 1,200 employees worked in its Paris offices at the intersection of Rue du Faubourg Saint-Honoré and Rue Boissy d’Anglas. The company is still headquartered in those offices, where about 250 employees are based.

Through all her success, Lanvin never forgot her daughter’s influence on her career. Arpège, the house’s first fragrance, was commissioned as a 30th birthday present for Marguerite in 1927. Its label is the figure of mother and daughter, adapted by Paul Iribe from a photograph taken in 1907 of Jeanne and Marguerite walking hand in hand to a costume ball. It became and remains the Lanvin logo, appearing on all the packaging, which Elbaz had changed to Lanvin blue.