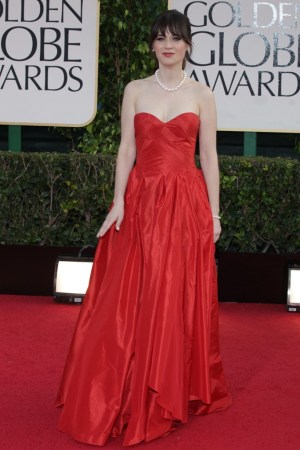 News flash: Sleeves aren’t just for chaste girls and fatties. Sleeves are a pleasant and versatile design element. Ditto sleeves’ lighter sister, straps, as well as non-bustier bodices, necklines that approach the neck and non sparkly siren, non-mermaid silhouettes. All of which can, with deft application, enhance the beauty of a dress and ultimately, the beauty of a woman — if only given the chance.

Sadly, that chance isn’t likely to come on the Hollywood red carpet. Exhibit A: Sunday night’s Golden Globes. Yes, the women looked invariably pretty, polished, glamorous. They obviously cared about making positive impressions, as if loath to do some crazy fashion thing that might imply mockery. Their traditional glamour respected both the moment and the television audience that, anecdotal evidence suggests, may like its actresses to go out on a limb on the big screen (Anne Hathaway in “Les Misérables”; Helen Hunt in “The Sessions”) and small (the girls of “Girls”). In matters of fashion, however, the audience wants these women to cling to convention like lint to felt.

RELATED STORY: On the Red Carpet at the Golden Globes >>

While most Globes attendees looked lovely, the collective made for pretty viewing of the banal sort. It may seem inappropriate and unfair to criticize; these women do not individually or as a group bear a responsibility to push fashion. At a dinner during a recent collections season, Salma Hayek talked about the stresses of the red carpet. She recalled that for her early appearances she would obsess over her selections and what critics might say. As she matured as an actress and a woman, she came to the conclusion that the only critic she has to please is herself.

Here, here. If all actresses currently on the awards circuit felt that way, Godspeed. But on Sunday night as I switched back and forth from the E network to NBC, I heard a number of women voice a similar motif: “I’m lucky. I have people who put it all together for me,” before running down their credits’ list of dress-jewelry-bag-shoes. Others noted, “I saw my dress for the first time yesterday.” Rather than women in charge of their own sartorial destinies, those comments suggest stylist-in-charge. God knows, the world needs stylists. By and large, they make this world a lovelier place.

But for too long a handful of archetypes has dominated the major awards circuit: hourglass bustier, bustier ballgown, blush mermaid, sweetheart sexpot. And if fashion on television qualified for residuals, Bob Mackie and Cher would be raking it in from all that illusion crystal work. Are we to infer that the best of Hollywood actresses fall into a handful of personality types?

When there are so many fabulous clothes out there already, let alone what designers would happily create custom, why must awards-show viewing be so dull? My favorite looks from Sunday came few and far between. I loved dresses that made the woman or girl look fabulous, and were I to describe the outfit, I wouldn’t have described those of several others. Alicia Vikander and Barbara Palvin, both in Chanel. Kathryn Bigelow in Prada. Adele in Burberry. Sienna Miller in Erdem. Lucy Liu in Carolina Herrera. Jessica Chastain in Calvin Klein Collection. Ariel Winter, wondrously age-appropriate in a very grown-up label, Valentino. About age-appropriate, what’s the rush to be so serious, girls? Lena Dunham and Allison Williams can put their gowns away and break them out again when they’re 50.

None of my picks went Björk swan-dress crazy nor even approached less overt audacity; apparently, genuine fashion daring is rare, limited to Elle Fanning, Tilda Swinton and, well, no one else leaps to mind at the moment.

What does come to mind is the thrill of the view at the Met Costume Institute Gala, where models, actresses and other celebrities dare to wear the very best, and often most extreme fashion, on the runways. Granted much of what works on the steps of the Met is no more suitable for prime-time network TV than curse words and nudity. Remember Madonna’s Vuitton bunny ears? They wouldn’t cross over. But how about a little excitement? We watch these shows at least as much for the fashion as to learn the Best Original Song. Yet year after year, the fashion falls flat.

I think two factors lead the majority of actresses to choose safety first. Most are afraid to look something other than ultraskinny, so dresses that don’t hug the body at least through the torso are eliminated immediately. Secondly, not everyone is blessed with Swinton-esque fortitude; most women fear being ripped apart in the inevitable postmortem — who can blame them? — whether or not the shredders know a thing about fashion.

Here, from pre-fall, last spring and one stunner from last fall (that Comme des Garçons show), I’ve assembled a little wish list, the kind of clothes I’ll hope for while watching the Oscars, all cozy, swathed in terry cloth and sipping tea. (Wait, I may not stay up — Paris shows, but another story.) These clothes are not one look (or three or four) fits all; Vuitton’s micromini and Prada’s architectural origami swing more ingénue than Best Actress nominee. Nor do I suggest blind embrace of a designer’s ethos. Rick Owens’ runway hair — no. But a billowing sleeve, a froth of neck fringe, even, dare one suggest, a frock that flows rather than hugs? Interesting! Fun! A tad controversial, perhaps! Love it or hate it, the audience won’t go to sleep bored.