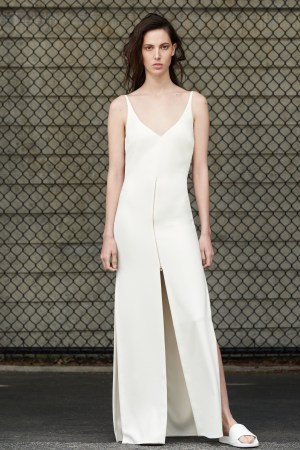 Stephanie Rad could never find a great pair of pants — ones that “accentuated, lifted and tucked in the things I wanted to hide…ones that I could wear to work in the morning and go out to dinner in.” Adding that “no one wants to go home and change before they go out,” her frustration with the market led to enterprise: Rad’s namesake label, which launched this week for pre-order in a trunk show on Moda Operandi, offers seven different pant silhouettes within a greater collection of relaxed separates and suiting.

“I thought, how could I create an outfit that catered to a modern woman?” she said.

If her design ethos seems rather straightforward, Rad’s path to design was a bit circuitous. Growing up in Long Island, she spent her summers clocking in as a shop girl at local boutiques, eventually landing a job at denim label Rock & Republic right as it was launching in the early Aughts. After earning a degree in design and management from The New School’s Parsons School of Design, she worked for Michael Kors, where her responsibilities included licensing, brand development and public relations, and a few years later alongside Stephanie Winston Wolkoff at the SWW Creative agency.

“[Wolkoff] and I took fashion brands and married them up to different industries — from entertainment to sports to technology to awards shows,” Rad said. “I was able to see how all of these different industries enhance each other.” She also spent several years working in commercial real estate: “It’s office buildings. Nothing sexy. But it gave me an amazing understanding of business, finance, accounting — a very important education for a new designer.”

Rad began whipping up her first collection last April before shopping it around to retailers for feedback. “We did no p.r. I just said, ‘What are you looking for? What’s selling? Here’s what I’m looking to create. How do you think it’ll move?’” she said. “What’s happening in the sales side of our industry is so interesting right now and I wanted to listen and understand what customers are looking for.”

She tweaked the looks accordingly, and her subsequent spring 2017 collection, which she considers her official debut, is marked by a sleek, minimalist aesthetic with an emphasis on fit and high-end fabrics sourced from Italian mills — most with a bit of stretch.

Done in a neutral palette of black, white and putty, Rad’s first lineup features jumpsuits, dresses and separates with unexpected details, such as slits, zippers and mesh cutouts. Standouts include a hooded three-quarter sleeve tunic; pants with a sliced “car wash” hem and tomboyish, oversize suiting in textured white silk.

“I think a little movement is important,” Rad said, noting the importance of fluidity, “while structure and lines convey strength.” Everything is meant to work together in a collectible wardrobe; she referenced “that old French way of dressing, with 25 pieces in your closet and 300 outfits.”

Rad’s grandmother, who had all of her clothing tailor-made in Italy, remains one of her biggest influences. “I can still hear my grandmother in my ear: ‘Make sure your bag matches your shoes,’” she said. “All of the hardware on my clothing is silver and gold, so it reads warm and cold…It allows you to wear anything you want with it. It’s about those little details.”