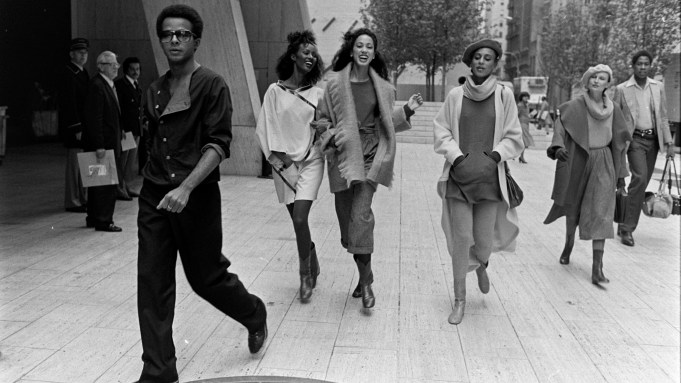 Fashion changes with the times, and so do the names we associate with it.

But key contributions from Black visionaries who have been vital to the industry have often gone without mention — or attribution.

Stephen Burrows and Lester Hayatt are two of those visionaries.

If you danced to disco in the 1970s, slipping into style might have included one of Burrows’ many looks. “I always played against the rules,” Burrows told WWD. His penchant for wrapping the body in easy knits became the new uniform for a modern, young consumer, whose work and recreational lifestyle became intertwined. “My inspiration came from my love of dancing, art and my friends.”

Those friends were often willing to step out together in Burrows’ colorful statement looks. “We would go out as a group dressed in my designs. That made it easy for people to see what I was doing, and it worked for me. Seeing all of us in the same look at once had a big impact back then,” he said. It’s a marketing advantage that couldn’t be bought today.

Burrows, a native of Newark, N.J., studied design at the Fashion Institute of Technology. After graduating, he worked in the Garment District for a year before setting out on his own in 1968. A year later, his first gender-fluid line of pants, shirts and tunics was sold exclusively at Jimmy Valkus’ “O” boutique in New York City. Burrows’ distinct mixing of fabrics and color was a refreshing departure from the norm of the day and gave him noticeable exposure within the fashion community.

When friend Joel Schumacher, a then up-and coming film director who also worked with Halston, introduced Burrows to Geraldine Stutz, then president of Henri Bendel, in 1970, everything changed for Burrows. He won the first of three Coty Awards, opened the “Stephen Burrows World” boutique at Bendel’s, and three years later his Stevie’s by Stephen Burrows loungewear label debut for Bendel’s, too.

Burrows wanted fashion to be easy-to-wear, not just ready-to-wear. He believed people should be comfortable in clothing, that they should be able to easily slip into or out of an outfit, and he designed his creations to suit. Burrows was known for his signature colorblocking, pants with zigzag stitch details and inlaid appliqué, and clothing that draped the body without constricting it. Perhaps his most unnoticeable contribution, as he explained to WWD in a 1970 article on the debut of his Bendel’s boutique opening, was that he would be using “No buttons or zippers…just snaps, and elastic waistbands.” He helped put “fashionable comfort” on the map, long before the loungewear era of today.

“I was doing what I loved. I loved working with fabrics in unconventional ways. I always liked creativity to flow freely. For me, that’s what worked,” he said. “As a designer, you should be allowed a space to experiment.”

Luckily, Bendel’s gave him that freedom. And in his experimentation, Burrows gave fashion the lettuce-edge hem, which took off in 1972.

“It was a mistake,” he said. “One of the sample hands was sewing a hem on a matte jersey dress and stretched it. It made a wave effect and when I saw it, I liked it and wanted to experiment with it.” But the heavy-weight jersey didn’t do what he wanted, so Burrows approached Jasco Fabrics, a supplier of matte jersey, for something lighter. Then came the evolution: He used the new lighter weight chiffon matte jersey to compliment the lettuce-edge hem. The experiment paid off, making his fluid cuts delicate, feminine and light.

By 1973, that philosophy would take center stage during fashion’s now infamous “Battle of Versailles,” a name coined by former WWD publisher John B. Fairchild, for the event that put American fashion — and Stephen Burrows — on the international scene. While Paris had control of the couture, the American fashion industry had already discovered a new consumer: one whose day into night life demanded a fluid enough wardrobe for their new, unapologetic modern lifestyle. And Burrows was there to outfit them.

For his 1973 Stevie’s loungewear debut, Burrows’ fabric of choice was French terry in silhouettes similar to his rtw, which gave it a new life at retail. Loungewear went from the bedroom to the street, a fact repeating itself in the current market. The category now called athleisure was introduced into the fashion conversation.

Burrows’ ability to work across categories led to work with Lacoste for leisurewear and athletic wear, and sweaters for Krizia by Mariuccia Mandelli in the 1970s. He also partnered with artist friends Bobby Breslau and Cecilia Silvera for handbags and jewelry, and licensed his name to products from fur to perfume. His collections were the first from a Black designer to be sold both domestically and internationally.

Today, Stephen Burrows is a name embedded in the fashion canon, though he doesn’t think he would have the same opportunities if he were a young designer today.

Recalling a time when fashion allowed for more experimentation and the designer practice could evolve, he said “It is not so much about what the designer wants to explore, but what the retailer tells them is going to be trendy and will work on the sales floor. Back then, we didn’t go to the buyer. They came to us.” This change, he said, is a loss for the consumer as it often means there isn’t enough variety in design, which leads to the lack of diverse product selection in the market today.

For his time, Burrows captured a sensibility in clothing that evolved the ease of dressing. And though his career notes often focus on the 1970s, his contributions to fashion reach far beyond this moment.

While Burrows entered fashion through gender-fluid separates and rtw, Hayatt, another visionary, found his entrance through maternity before pivoting to contemporary fashion.

Hayatt, a native of Panama, came to New York at 17 to study fashion at Parson’s School of Design. After graduation, he went to work with designer Giorgio Sant’Angelo. Within a year, he became the sole designer for Lady Madonna Maternity Boutiques in 1974. Although his training was not in this specialized category, Hayatt approached maternity fashion with the same passion he had for rtw. He evolved the category, failing at retail for lack of design, into a modern, chic style that rivaled non-maternity looks — moving the category onto the fashion market week calendar.

Lady Madonna Maternity became a go-to for celebrities and the new, modern young mother. By the time Hayatt left the company in 1979 to go out on his own, WWD had reported sales at $4 million and licensee’s volume estimated at $11 million.

By the 1980s, the Baby Boomer held the largest group of female college graduates now working in a variety of professional environments. They were looking for “weekend wear that was different,” said Colbert, who partnered with Hayatt from 1980-82, the company’s formative years.

“Lester Hayatt Inc. as a brand had a formula. Focusing on product, retailer and consumer helped lead the [Hayatt] brand to windows on Main Street, trade acknowledgments and daily periodicals that were marketed locally and around the world,” she said. He saw what was missing in the wardrobe: affordable clothes that were modern and versatile. When Hayatt chose to take camouflage to the center of fashion, it was the “newness” the market needed, Colbert said.

“The timing gave momentum to this military used — but not [then] used in fashion — printed textile with real marketability that turned it into a classic,” Colbert said. The camouflage phenomenon led to department store accounts with Bonwit Teller and Macy’s Herald Square, who created a Lester Hayatt shop in its Young Collector department in 1981. The brand also sold in the U.K. and Japan as a new contemporary designer brand. “We used this momentum to build a brand seen as innovative and on-trend, focusing on an emerging market. The brand had the right product, excellent relationships with buyers, and a price point that enabled sell-through volume.”

The [Hayatt] brand also evolved sporting silhouettes like the riding jodhpur for streetwear in cotton khaki and olive drab, reimagined the core sweatshirt in color-blocked rayon, and introduced what WWD declared a “hot ticket” for summer 1982 — the multifunctional “obi” wrapped pant. Like Burrows’ lettuce-edged hem detail, the obi pant is still produced today.

It goes without saying that fashion is always in flux, striving to meet the social currents of the moment.

At the end of the 1980s as the market began to soften, so did retail. Both Burrows and Hayatt stepped away from wholesale. Hayatt opened two stores on New York’s Upper West Side bearing his last name that exclusively sold his collection of trendy sportswear. Burrows was designing special orders and small collections for Bendel’s and Barneys. By the mid-1990s both designers had walked away from fashion, though Burrows made a well-received return in the early-2000s.

For both designers, innovations created opportunities to evolve American rtw and sportswear, moving the needle on the concept of comfort and lifestyle branding that lives on today.