To better assist retailers, the American designer has tinkered with his design-cum-business formula for spring-summer. The revised strategy consists of smaller collections, more special... 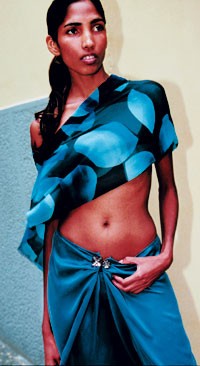 To better assist retailers, the American designer has tinkered with his design-cum-business formula for spring-summer. The revised strategy consists of smaller collections, more special pieces and a new eyewear collection.

Though still under the wing of the Burani Group, Fairchild, 43, has switched from the umbrella company to a smaller manufacturer called BFM Industria, which is a 50-50 venture between Burani and David Agus, BFM Industria’s chief executive officer. “David and I met two years ago, and we hit it off immediately; we clicked culturally. I fell in love with the factory and we decided to join forces,” said Fairchild, adding that Giovanni Burani, the group’s ceo, recognized it was a better match.

Agus and the Brussels-based Fairchild — who cut his teeth at Giorgio Armani, Ralph Lauren, Calvin Klein and Valentino — share a similar vision: smaller collections of about 80 pieces that call attention to great separates.

“We completely changed the concept, the image and the positioning. It was like starting from scratch, because we did away with such categories as jeans and basics that Fairchild shouldn’t have been worrying about,” Agus said. Fairchild launched his namesake brand in June 2001.

Designer and entrepreneur concur that a lesser-known brand has to be attention-grabbing in order to get top retail space, especially at a time when the fashion world teems with more names than ever. “It’s about mixing and matching Puma with Seven jeans and a Fairchild top,” said Fairchild, the son of John B. Fairchild, former chairman and editorial director of WWD parent Fairchild Publications Inc.

Added Agus, “The spring collection is all about special pieces that work from St. Bart to the Hamptons through Pantelleria.”

To obtain that feel-good vacation mood, Fairchild worked with tissue-thin silks, which he layered, tucked and wrapped to form halter dresses, sarongs and off-the shoulder tops, or paired with a crisp white blazer and metallic cotton pants. Fairchild champions tops as a closet staple, and he offers a wide variety: ribbed tanks, spaghetti strap numbers and exotic T-shirts with turquoise- and coral-encrusted necklines.

The collection’s average wholesale price is $120.

Agus predicted sales will hit the $6.1 million mark over the next three years. Of the 140 sales points, Agus expects to upgrade at least a half of them. “We’re in no hurry, because we plan on building the brand step by step,” he said.

Spring will also mark the debut of logoed sunglasses, produced by Promodesign under a five-year licensing contract. Five of the trendiest styles will be shown at Fairchild’s presentation here on Thursday.

Distribution has been mapped out so that fashion-forward styles will be carried in specialty stores carrying the designer’s line, and 15 more mainstream models will go to optical stores.

For fall, about 25 prescription styles will be added to the lineup. Wholesale prices range from $29 to $61.

The large, nickel-free frames, designed to cover the eyebrow, have pastel-tinted lenses and are bejeweled with Swarovski crystals. The forecast over 18 months is to sell 40,000 frames for about $1.2 million.