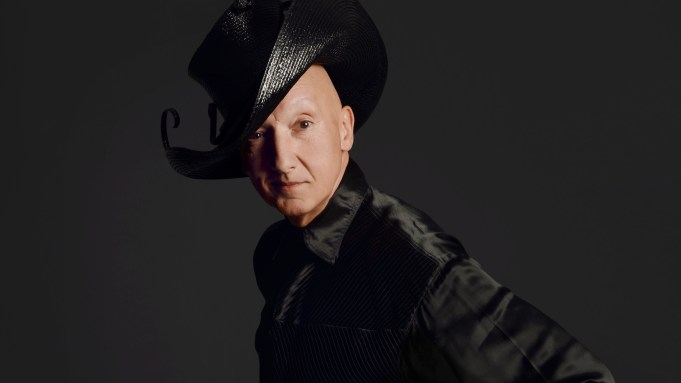 LONDON — For Stephen Jones, 2017 is punctuated with two big anniversaries, both with zeros at the end — but in many ways the British milliner’s work has just begun.

Although the breadth of Jones’ creativity over the past 40 years is unmatched — he’s fashioned pharaonic headdresses and paint-splodged artists palettes for John Galliano’s runways, fashioned delicate metal crowns for Comme des Garçons and, most recently, lassoed cowboy hats onto the 2018 Dior resort runway — there is more to be done.

“I always think the most interesting hats are the ones that I still have to make. There are still so many things you can do with a hat,” says Jones, who turns 60 on Wednesday.

“There are many hatmakers who just make hats, and who don’t think about the fashion. I love thinking about the fashion, and the crazy thing about fashion is that every six months you have to reinvent yourself. Fashion makes sense when it matches the mood and the moment. It’s about the now.”

Jones, decked in jazzy patterned trousers and a dark shirt, is sitting in the studio at the back of his shop. An 18th-century building in London’s Covent Garden, its front windows are filled with his otherworldly creations — a floppy sunhat the color of a tie-dyed rainbow and a delicate, upside down bird’s nest with branches and flower buds springing from it.

In the studio, he’s surrounded by his latest winter creations, a wild riff on various designers’ styles.

“This is Pierre Balmain — broken jewelry and taffeta,” says Jones, picking up one of the hats. “Here’s a padded cap matching the Charles James padded jacket. It was so difficult to work out, but it’s actually the most wonderful, comfortable hat.”

He quickly moves across the room to pick up a black swirl of a hat with a sticky surface. “This is Madame Grès’ turban — in black vinyl. It’s completely the opposite of what she would have worn — hers would have been very chic and understated in gray or black jersey.”

Jones loves a riff and gets so much of his energy from his peers’ ideas. He thrives on collaboration and exchange. In addition to Dior, Comme des Garçons and Galliano, the milliner has worked regularly on runway collections with designers such as Giles Deacon, Jean Paul Gaultier, Claude Montana and Marc Jacobs, tapping into their seasonal moods, while simultaneously creating collections under his own label.

“He’s sensitive and understanding. He never complains and never falls asleep, even when you’ve been up for days and days, and generally his answer is ‘yes,’ which makes designers very happy,” says Katie Grand, the stylist and editor of Love magazine, who has worked with Jones for years. “He’s very collaborative, which is why I work with him so often. Every time he walks into the room he makes it better.”

Jones most recently worked with Deacon on Pippa Middleton’s wedding ensemble. Given that the silhouette of the dress was simple, but the texture of the fabrics complex, Jones says “we decided that whatever we put on the head had to be quite clean to balance it. We didn’t want something fancy or crafty. We found a new way of cutting the veil and creating folds around the face to keep it really clean and lightweight.” The result was a silk and rayon cloud sewn with 3,000 pearls.

In addition to his collaborations, Jones can’t live — or create — without diversity and extremes. He created his first hat in 1977, founded his business in 1980 and found himself making hats for Boy George and the other club kids — and for the newlywed Princess Diana.

“I had this weird dichotomy, which I have always loved — the high and the low,” says Jones, who in the late Seventies used to hang out at the Covent Garden nightclub Blitz, a hub of the New Romantic movement where Boy George was the cloakroom boy. “One thing that’s unique about England is that the duke and the punk look — and are — very different. But they still respect each other and they don’t judge each other. In many other countries they would be very judgmental” of each other.

Don’t ever ask Jones to choose between the two. “It would not be good for my designs. It’s always good to be challenged all the time. It’s the same as working with designers. They move on and they have a new vision of what’s ugly and what’s beautiful. It’s so interesting to play, to catch up to their mind and take their mind to somewhere else. That’s the meaning of what real collaboration is.”

It was by way of Boy George that Jones was able to break out of Britain and find a future on the Continent. Jones appeared briefly, decked in a black fez and a jacket with the widest of shoulders, in Culture Club’s “Do You Really Want to Hurt Me?” 1982 video.

Jean Paul Gaultier spotted Jones and asked him to model in his men’s show. Jones never hit the runway, but he made hats for Gaultier and quickly connected with Thierry Mugler, Joseph Ettedgui and Galliano. He would go on to have a long relationship designing for Galliano, on that designer’s own collections and at Dior.

In between collaborations and his own collections, Jones has a number of other projects on the boil. Among them is a thoroughly modern hat that can take a few knocks — and pop right back into shape.

It’s a 3-D knitted style that’s light, stretchy, comfortable — and machine washable. Jones says he’s planning to do it in “totally gorgeous and wonderful shapes.” He’s already been speaking to the knitting departments of the design studios he’s working with “in order to create new things.”

In addition to putting together the hats for the upcoming Dior Couture collection, Jones is working on another collaboration involving Comme des Garçons and Gosha Rubchinskiy that will debut in a few weeks’ time. There’s also a string of exhibitions, including “The Hats of Stephen Jones” at the St. Louis Art Museum in Missouri.

Eight of Jones’ hats are interspersed throughout the museum’s collection, “in conversation” with works ranging from Impressionism to 19th-century decorative arts to African art. They also appear in an exhibition called “Degas, Impressionism and the Paris Millinery Trade.”

Jones is also taking part in the upcoming show at the Musée des Arts Décoratifs in Paris, which marks the 70th anniversary of the creation of the House of Dior and opens on July 5. His work will be on display at another Dior show, at the National Gallery of Victoria, Australia, called “The House of Dior: Seventy Years of Haute Couture.”

Amid the maelstrom of creativity and collaboration, he is also running an independent business — and thinking about his legacy.

“In a funny way, I’ve always had outside investors because I’ve always had private clients and supporters like Rei Kawakubo, Dior and John, as well. Montana, back in the day, Jean Paul Gaultier, and Thom Browne, of course. All these people really believed in me and bought hats from me and I find their minds and their worlds absolutely fascinating. And they are prepared to spend quite a large budget on hats, too.”

Jones runs a tight operation in Covent Garden — it’s not all taffeta, broken jewelry and vinyl turbans. He employs around 30 members of staff, with freelancers joining during busy times, and has trained everyone in his studio. Most of his hats are made on site at 36 Great Queen Street.

He has never wanted to conquer the world with a major outside investor. “Do I want to open shops around the world? No, not necessarily. I see what happens — and what has happened — over the years with designers [and investors]. Sooner or later things don’t work out. You can achieve a lot — but there’s always a cost,” he says.

As for the future of his company, he says, “There have been various people whom I’ve thought maybe could take over. The most important thing is [that the business has to] be able to be flexible and to change.” He’s not naming any potential successors, and for the foreseeable future he’s not going anywhere.