Steven Madden Ltd., the contemporary shoe and accessories firm known for trendy styles, is going into legwear starting this fall with a collection to be produced and distributed by the New York-based Gina Group. 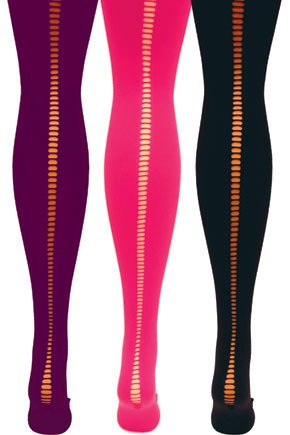 Steven Madden Ltd., the contemporary shoe and accessories firm known for trendy styles, is going into legwear starting this fall with a collection to be produced and distributed by the New York-based Gina Group.

“Steve Madden has an interesting customer base,” said Aimee Bailey, design director at the Gina Group. “Every woman from the age of 12 to 40, or even older, wears the shoes. My little sister and my mother wear them…so when we were designing this line, we wanted hosiery to span that same age range. So we have basics, but we wanted to sprinkle it with fashion items to keep the look of the brand and the trendiness remaining throughout the collection.”

Wholesale prices for Madden legwear range from $2 for a footed minisock or “footie” to $12 for fashion tights, both footed and footless. Other pieces in the collection include basic and sweater-knit tights, fashion athletic multipack socks, knee-highs, legwarmers and leggings.

The legwear also will be available at select Steve Madden stores starting in July.

“We had a hosiery licensee long ago, but found a new partner who believes in our vision,” said Rob Schmertz, brand director of Steven Madden Ltd. “Hosiery is an extension of footwear, anywhere from tights, socks and leggings.”

The addition marks another step forward in the company’s goal of becoming a global lifestyle brand. In February 2006, Madden purchased privately held handbag and belt manufacturer Daniel M. Friedman & Associates for $18 million in an effort to complement and widen its reach beyond footwear.

Schmertz said the firm is “eagerly looking into all categories that are an extension of the brand.”

“It’s the best time to be going into legwear,” said Paul Kubie, vice president of brand development at the Gina Group, which also holds the license for Rocawear and Union Bay legwear. “It’s all about the leg. Everybody is accessorizing with anything they can put on their legs. It’s a great way to change up an outfit. For us, the legwarmer seems to be a very hot item.”