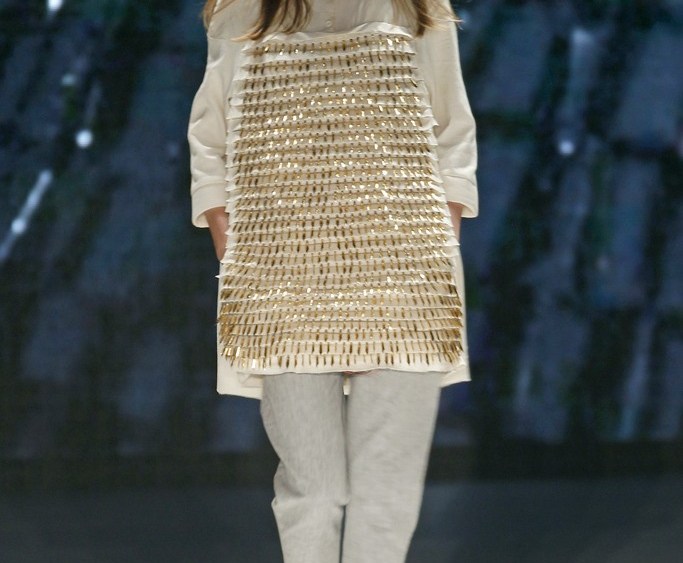 Steven Tai, who this season is a Berlin fashion week Elle sponsored designer, presented a memorable paper chase. His collection displayed geeky girls on the edge of reason, and bookworms who want to know what it feels like inside the pages of a beloved tome. Thus, fluttering layers in manila hues enveloped the body, with cascading raw edges traversing asymmetric hems.

Playing on the idea of a nerd in a checked shirt, Tai created subtle squared textiles by knitting ribbons of chiffon into a stiff raglan top and slim pants with a touch of sheen. Foam strips were basket woven into checkerboard patterns, then covered with light yellow or brilliant blue fabric, and formed into wearable cocoon coats, short jackets and pegged pants. Awkward and endearing, cropped trousers stood away from the body via volume — some with thickly stacked waistband details. One showcase smock even offered academic armor: the front was plated with golden pen nibs.

The 28-year-old Canadian, who works out of London after graduating from Central Saint Martins in 2011, won this spring’s Chloé prize at Hyères for his library looks. Tai also made his trade show debut at Capsule in Berlin.