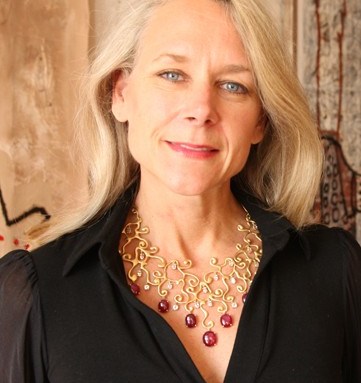 Ariane Zurcher’s entrée into the jewelry business was decidedly unconventional. Although she had worked as a freelance knitwear designer and graduated from Parsons School of Design (now known as Parsons The New School for Design) in 1984, she left the industry for a career in advertising in the Nineties, ultimately ascending to the role of creative director at Long Advertising in New York. But in 2004 she had a life-changing event: her daughter, Emma, then two, was diagnosed with autism.

“I stopped all work. I needed to find out everything I could about autism,” says Zurcher, who also has an eight-year-old son, Nick. “It became my mission. I tried traditional therapies; I tried bizarre therapies; I tried alternative therapies. I think I read every book on autism that was published.” Meanwhile, her husband encouraged her to get back to her creative roots. What began with stringing a few beads together for fun and diversion grew into a fine jewelry collection of 18- and 22-karat gold baubles embellished with bold sapphires, tourmalines and rose quartz. “Within three months, I knew that this was what I wanted to do,” says Zurcher, who works out of a studio in Long Island City.

There’s a freehand fluidity to Zurcher’s designs, which retail from $2,400 to $45,000. Her Juno collection, for instance, features flaxen squiggles dotted with gemstones and diamonds, which Zurcher calls “ribbons of gold dancing.” The Dauphine lineup, meanwhile, with its flowing lines, suggests Art Nouveau.

“I love the ways in which you can manipulate gold by linking and weaving shapes together,” Zurcher says. “It almost becomes like a knit.”

Then there are her Samadhi offerings, which nod toward the Far East and are far less free-form. The pièce de résistance here is an 18-karat brushed gold-and-diamond necklace made of linked shapes reminiscent of Japanese river rocks. “There’s a sort of Zen quality to it,” says Zurcher, recalling that her parents once had a Japanese sand garden in their Bay Area home in California.

Family, in fact, plays a large part in any Zurcher narrative. Her grandparents, Elizabeth and Walter Paepcke, were art collectors who founded what is now the Aspen Institute and helped transform the town into a cultural center. Her dad was curator of pre-Colombian and African arts at Stanford University. “I was very fortunate to be surrounded by so much art as a child,” Zurcher notes. “It gets in your blood. I think what happens is that, as an artist, all these influences just kind of come out organically.”