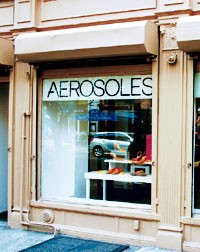 While low rents and available commercial space in some areas of Brooklyn such as Williamsburg and DUMBO have attracted small boutiques, art galleries, local designers and new restaurants, Brooklyn Heights is luring big-name national chains.

“National retailers are recognizing the strength of the market in Brooklyn Heights,” said Barry Fishbach, executive vice president of Robert Futterman & Associates, who has brokered deals in the neighborhood for the last 10 years. “This is an established and well-known neighborhood and companies want to be there.”

Ross said commercial rents are now about $100 a square foot per year and average about $15,000 a month for many stores, a price that’s often out of reach for small and locally owned businesses.

Most of the retail property is located on the street level of brownstones with the bulk of the buildings still privately owned. In addition to fashion firms, chains such as Verizon and Subway have also set up shop on Montague Street in recent months. Other national retailers include Rite-Aid, Sprint and Starbucks.

Located just over the Brooklyn Bridge, Brooklyn Heights has long attracted city dwellers who want to be close to Manhattan but crave a more peaceful environment. There are now about 23,000 residents, and the average per capita income is $61,000, according to information from the Brooklyn Heights Association, a neighborhood advocacy group. The area also houses federal and state courts and is easily accessible by a number of subway lines.

“Stores benefit from a residential population as well as an office population,” noted Ross, who said there has been a steady build-up of stores in the area over the last 10 years.

The shifting retail landscape is drawing ire from some residents who want to maintain the existing character of the neighborhood. It’s a familiar sentiment, which bubbles over when communities find themselves under siege by nationals.

A number of smaller merchants have been priced out of the area and some locals are upset with the new mix of stores. Several locally owned businesses have closed recently, including a photo store, art gallery and Mexican restaurant. A record store and another locally owned eatery are closing soon.

The Brooklyn Heights Association recently released a position paper outlining its views on the neighborhood’s changing retail character. “The BHA is concerned by the lack of variety on our commercial streets,” the group stated. The paper said Montague Street is underserved by stores for children and teens, athletic apparel, fine gifts and men’s clothing. At the same time, the BHA said the neighborhood is “already well served by certain retail operations, and strongly discourages” more of these stores from opening on Montague Street: optical, drugstores, quick-service food, dry cleaners, beauty salons, spas and banks.

“There is a special sense of place here and a village-like mentality,” said Judy Stanton, executive director of the BHA. “People are upset by the economic pressure that results in a national chain being more likely to afford the escalating rents than a local retailer. We are not anti-chain. We just want to make sure we have the right retail balance and variety.”

Some longtime local merchants, having experienced other shifts in the neighborhood, are adapting to the new challenges. Tango, a fashion-forward women’s apparel and accessories store on Montague Street, opened in the neighborhood more than 30 years ago, at a time when there were no chains on the street. Owner Michael Mastriano, who has lived in Brooklyn his entire life, said he has watched the developments with mixed emotions.

“I am not really in favor of chains, but with the chains comes more street traffic,” he said. “MAC has been doing great in the neighborhood and the MAC customers are similar to the customers in my store.”

Tango is one of the few stores in the Heights and surrounding areas that sells a variety of trendy and designer brands under one roof. The 2,000-square-foot boutique carries denim, contemporary, bridge and better offerings from Diane von Furstenberg, Max Mara, Tahari and Theory, among others, as well as accessories and footwear from labels such as Rafe, Kooba, Kate Spade, Cole Haan and Sigerson Morrison.

Mastriano, who owns the building that houses his store, places an emphasis on service, requiring at least three sales people to be on the floor at all times. He buys merchandise, oversees the staff and designs the store’s windows. He’s also grooming his children, 19-year-old Jessica and 24-year-old Joseph, to take over the business.

While he plans to keep his store in its location, Mastriano leased an area on the second floor of his building to real estate firm Citi Habitats, in a space formerly used for inventory.

“What’s different about a small retailer like myself is if I see garbage on the street near my store, I pick it up,” he said. “The chains don’t do that.”