PARIS — Functional, feminine and embellished. Those were the buzzwords for accessories exhibited at the Premiere Classe trade show held in tandem with the spring-summer 2005 runway shows at the Jardin des Tuileries. 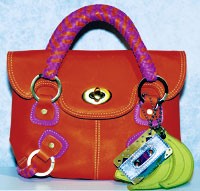 PARIS — Functional, feminine and embellished. Those were the buzzwords for accessories exhibited at the Premiere Classe trade show held in tandem with the spring-summer 2005 runway shows at the Jardin des Tuileries.

Buyers at Premiere Classe, which drew 14,388 people Oct. 8-11, were bullish about the accessories category, while designers showcasing their collections lauded the return of American and Asian buyers.

“It was the best spring-summer Premiere Classe we’ve had in several years,” said Scott Tepper, fashion director at Henri Bendel, noting exhibitors turned up some solid trends. “There was a combination of African and travel themes, color and embellishment, all blended with a bohemian influence.”

Julie Gilhart, vice president and fashion director at Barneys New York, who kept her eye out for hot items at runway presentations, said, “When you break [accessories] down by category, there was lots of choice.”

Abigail Rainer, fashion and accessories director at Harrods, noted there’s a trend toward exotic skins for accessories. “Poor pythons,” she said. “There will be none of them left.”

Rainer, who was shopping Premiere Classe for jewelry, belts, hats and some bags, noted that midnight blue and pink were among the colors she was keen on for spring-summer.

“It’s not about black or brown bags for spring,” Tepper said. “We love color in accessories, especially in handbags.”

Indeed, color abounded at the show. Executives at the Jack Henry and Elena Meyer brands injected color into their lines for the first time to respond to demand for vibrant hues.

“We have to sell bags,” said designer Elena Meyer, explaining why she deviated from basic black for her collection. Her bags wholesaled from $93.50, or 75 euros, to $231, or 185 euros.

Dollar figures have been converted from the euro at current exchange.

Red, gold and yellow bags helped to attract buyers to the Jack Henry booth, said a spokesman for the brand. He added that feminine touches were also premium. A distressed-leather tote decorated with palm trees wholesaling for $97, or 78 euros, was the best-selling item.

“It’s spring — everybody is in a much better mood,” said Amis Jarossay, designer and manager of handbag brand Garrigue & Jarossay, explaining the wash of colorful accessories on display. A slouchy embroidered leather handbag wholesaling at $236 was among her bestsellers.

And while many handbags had a colorful, bohemian bent, designers were nevertheless taking a functional approach.

“Designers are thinking about real women’s lifestyles,” said Bendel’s Tepper. “Even tote bags have closures. They know that women can’t walk around the city with their bags open.”

Jerome Dreyfuss, designer at his own brand, worked numerous pockets and compartments into his spring-summer collection, dubbed Roots de Luxe.

Embellishments and sparkles were a common theme across numerous categories.

“It gives us a reason to buy new [items] as we all have plain ones,” said Rainer.

Bags adorned with slogan-bearing badges, for example, were hot sellers at Premiere Classe newcomer Clemande Bartel’s Cabas by Clemande stand, where leather bags with removable badges were wholesaling at $106, or 85 euros.

Bajra used sequins to embellish its line of cashmere and silk scarves.

“There’s sparkle on everything,” said Gilhart.

Many designers were upbeat about the turnout at Premiere Classe, noting that international buyers have become accustomed to the strong euro. For some brands, however, exchange rates are still causing problems.

“We reduced our prices because [our products had become] too expensive,” said Constance Dubrule, designer at Paris-based Rows, adding wholesale prices for her latest collection are 40 percent lower than previous seasons.

Dubrule noted that, while buyers may be willing to stretch their dollars for known designers, smaller brands are having a tougher time. To draw cash-pinched buyers to her stand, she introduced a line of low-cost cotton items, including purses wholesaling for $19, or 15 euros.