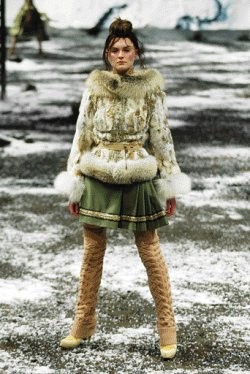 By Miles Socha and Robert Murphy

PARIS — Three cheers for elegance.Retailers praised Paris Fashion Week for a return to beauty and sophistication over blatant sex. What’s more, they said the collections were loaded with enough news to stimulate purchases in uncertain times. Here’s what they had to say:

Julie Gilhart, vice president of fashion merchandise, Barneys New York: “Forget all the trendy stuff right now. It’s really a couture feeling and a real feeling of beauty that’s important, because customers want something substantial and lasting right now. [Standouts] were [Alber Elbaz for] Lanvin and Dries Van Noten, who delivered their best shows ever, and Rochas, where Olivier [Theyskens] made such a strong introduction.”

Eliana Tranchesi, owner, Daslu, São Paulo: “The most important message from Paris was elegance. Cashmere, crocodile, satin, silk and the finest leathers were among the noble fabrics of the season, while the key pieces were coats and minitailoring à la Chanel. It’s a ‘new’ classic way of dressing.”

Joan Kaner, senior vice president and fashion director, Neiman Marcus: “I’ll take anything from Chanel. I thought it was perfection. It was Karl [Lagerfeld] doing his best. It wasn’t about reinventing the wheel, but about making beautiful, wearable clothes for the mother, the daughter and even the grandmother.”

Maria Louis Poumaillou, owner, Maria Lusia, Paris: “Paris has been about urban elegance. The sexy lingerie look is totally out. Sexy is still there, but it’s more feminine, more covered. Girly is out. There’s been a shift toward a new style, which is more constructed with volumes. Parkas and blousons, paired with leggings — in anything: leather, wool, you name it —were a move towards more urban elegance. The jacket is out, too.”

Jaqui Lividini, senior vice president of fashion merchandising, communication, Saks Fifth Avenue: “The most interesting new thing was the mix of performance and activewear details with ready-to-wear pieces. We saw it at Gaultier, Chloé, Chanel and Dior. We didn’t only see it on the runway, we saw it in the audience. We call it the real sportswear. It’s a new way of wearing a suit: With a hoodie under it.”

Sarah Easley and Beth Buccini, owners of Kirna Zabête, New York: “The best collections in Paris have had a punch of freshness to them in color and excitement. We’ve seen a lot of somber clothes and that don’t translate very well. The most inventive collections have been the strongest, such as Gaultier and Chloé. The designers who decided to play it safe missed the boat.”

Joan Burstein, owner of Browns, London: “Paris offered a lot of choices. It’s been a good season. For my clients, Junya Watanabe and Dries Van Noten are excellent, and I liked Stella McCartney. It was more grown-up.”

Kouhei Yanagisawa, director and executive officer, Hankyu Department Stores, Japan: “All the Paris collections were about elegance. We very much liked Junya Watanabe’s mix of avant-garde and elegance. It was very creative.”

Robert Burke, senior vice president of fashion direction, Bergdorf Goodman: “Paris has shown the ultimate in sophistication and refinement. In these difficult times, there has been an emphasis on beauty, femininity and details in tailoring. It’s been an enormously creative season. Everything we’ve seen has had a reason for being, a purpose.”

Sue Patneaude, vice president of designer apparel, Nordstrom: “There have been two camps, either a fitted top paired with a full skirt, as in Alexander McQueen or John Galliano, or full tops with more fitted silhouettes on bottom. The key is what happens on top, from cape backs to flare backs to honey-bee backs at Rochas, the baby doll at Jean Paul Gaultier, the kimono shoulders at McQueen and Stella McCartney’s sculpted pink jacket.”

Jeffrey Kalinsky, owner, Jeffrey, New York and Atlanta: “Women always love pretty clothes in any time, and a lot of the collections in Paris were about modern refinement. Couldn’t you just lay down and die when you [saw] something as refined as Rochas? That collection and [Olivier Theyskens’] talent are worth making a trip to Paris for.”

Kal Ruttenstein, senior vice president of fashion direction, Bloomingdale’s: “The biggest takeaway from Paris is this belief in snappy, young sophisticated clothes based on a new proportion: the shorter length. In a tough economy, I think it’s going to make women want to buy new clothes.”

Barbara Atkin, fashion director, Holt Renfrew: “The coat is the story. It’s a voluminous coat you cinch around the waist, and then you pull up the collar. It’s a real item.”

Majed Al-Sabah, owner, Villa Moda, Kuwait: “Paris was very much about retro, but interpreted in modern, sophisticated ways, like Olivier Theyskens did at Rochas. Also, I thought McQueen was to-die-for with its couture details, and Viktor & Rolf was killer chic, very modern. Those were the three best collections. And the eveningwear at Yves Saint Laurent was the cherry on the cake.”

Alla Verber, vice president, Mercury Group, Moscow: “It was more exciting for me in Paris than in Milan. We like to see something that makes women glamorous and sexy. Alexander McQueen, Lanvin and Yves Saint Laurent were wonderful.”